Israel says, and Hamas denies, that high-ranking military leaders and Hamas cadres are coordinating armed operations against Israel while based in countries such as Turkey, Qatar, Syria and Jordan. 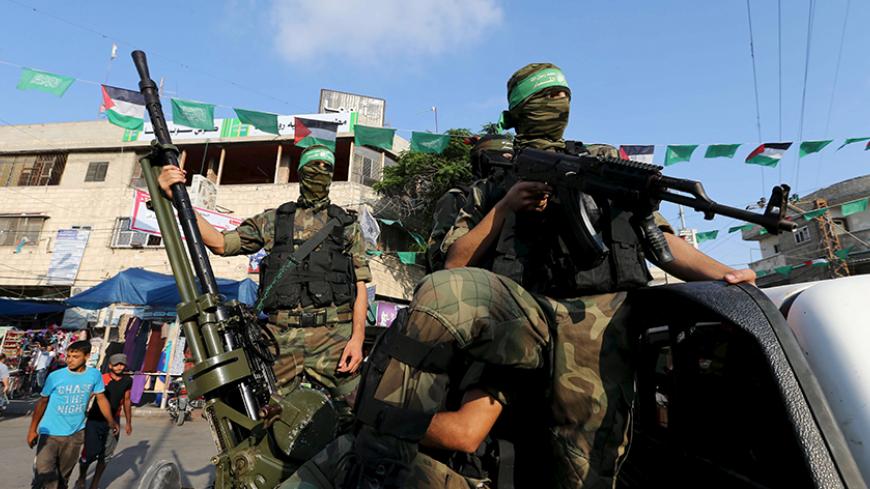 Palestinian members of the Izz ad-Din al-Qassam Brigades, the armed wing of the Hamas movement, take part in an anti-Israel parade in Rafah, in the southern Gaza Strip, July 13, 2015. - REUTERS/Ibraheem Abu Mustafa

A series of armed operations took place in the West Bank in recent weeks, killing and injuring a number of Israelis. Izz ad-Din al-Qassam Brigades, the military wing of Hamas, claimed responsibility July 1 for some of the attacks, in which no Palestinians were injured.

Also on July 1, the Israeli security service Shin Bet announced it had arrested 40 Hamas activists in the northern West Bank in recent months who had sought to establish military cells to carry out operations against Israelis. It accuses Husam Badran, Hamas' spokesman in Qatar, of leading, funding and guiding the activists, and sending them hundreds of thousands of dollars. Badran is a former commander of al-Qassam Brigades in the northern West Bank.

Badran told Al-Monitor, “Putting the blame on the liberated detainees for the resistance actions in the West Bank is an attempt by Israel to justify its security [services’] failure to halt the escalation of armed operations. The al-Qassam Brigades operations are managed, planned and implemented by [al-Qassam’s] cadres in the West Bank, and they do not need anyone’s permission to exercise their right to resist the occupation.”

Israeli Defense Minister Moshe Ya'alon said in a July 1 interview on Israeli Channel 10 that Turkey is also responsible for the operations in the West Bank, because it is hosting Hamas leader Salah al-Arouri, who Ya'alon said is planning to carry out attacks against Israel.

Israel’s Channel 10 revealed July 19 that Israel has officially demanded that Jordan hand over liberated detainee Ahmed al-Najjar for being directly implicated in the armed operations in the West Bank. Najjar, who has been residing in Jordan since his release in a swap deal in 2011, was sent away from the West Bank, where he had lived.

In a July 21 press statement, Hamas denied Israeli accusations that it is receiving instructions from abroad to carry out attacks on Israel.

Among those Israel has accused are dozens of Palestinian detainees who were freed in the swap deal between Israel and Hamas in October 2011. Israel required that 163 detainees be sent to the Gaza Strip, and 40 others expelled to Turkey, Qatar, Syria and Jordan. In addition to the 1,000 detainees who were freed, there are thousands of others still waiting to be released. Hamas has said it believes their freedom will only be achieved through armed operations and abductions of Israeli soldiers or settlers. This is what Hamas has tried to do.

A senior Palestinian security official, who spoke to Al-Monitor on condition of anonymity, said, “The investigation of Hamas members in the West Bank revealed that freed detainees who are present in Gaza and Turkey were clearly involved in the implementation of the recent operations in the West Bank, and have formed sleeper cells in the West Bank.”

The Israeli accusations leveled against the expelled freed detainees indicate that Hamas outside of Palestine has the ability to self-renew itself at the organizational level, given its forced movement in the past few years between Jordan, Syria, Qatar and Turkey.

The accusations also show that Hamas’ military leaders abroad are now all the more influential in the decision-making process within Hamas. What is more, the accusations increase the likelihood of an Israeli assassination attempt against Hamas leaders abroad, similar to the murder of military leaders such as Mahmoud al-Mabhouh in Dubai in 2010 and Ezzedine al-Sheikh Khalil in Damascus in 2004.

Al-Monitor’s Israel Pulse wrote July 21 that the involvement of expelled released detainees in armed activities shows that they should not be expelled outside the West Bank, because this policy has not stopped them from plotting armed operations. Badran also believes that Israel will reconsider its expulsion policy.

A June 26, 2014, story in the Israeli newspaper Maariv accused Badran of being Hamas' ambassador in Qatar, where he plans armed operations and the abduction of soldiers in the West Bank.

Israel rearrested 70 liberated detainees, who are still detained as of this writing, following the abduction of three Israeli settlers in the West Bank in June 2014. Those detainees must be released before any future swap deal will be considered, Hamas spokesman Ismail Radwan told Al-Monitor.

Badran explained to Al-Monitor that “the Israeli accusations leveled against the detainees residing abroad is part of [Israel’s] policy designed to reshuffle cards, and its efforts to influence Hamas' foreign ties and put pressure on the host countries.” He added, “Yet, the countries hosting us do not buy the Israeli tricks that are based on lies.”

It is no secret that Hamas is trying, in various ways, to restore its military structure in the West Bank, despite the harsh blows dealt to it by both the Palestinian Authority and Israel. The released detainees expelled outside the West Bank may be the most familiar with the geography and the field in the West Bank and may be the most qualified to carry out the rebuilding Hamas’ military service while staying free from the grip of the Israeli army, which would not be able to arrest or assassinate them.

An official at the Turkish Foreign Ministry, who spoke to Al-Monitor on condition of anonymity and who sometimes visits Gaza and Tel Aviv, confirmed that “Turkey is hosting a number of Palestinian detainees, showing hospitality toward them." The issue does not go beyond mere hospitality, he said, because involvement in [foreign] military operations in prohibited in Turkey.

He also said, “The Israeli security services informed their Palestinian counterpart about a new plan of action that Hamas is adopting in the West Bank, through communication between the expelled released detainees and activists at home, and that each military group in the West Bank works independently and is directly connected abroad, which makes the work of these armed cells more dangerous and poses a threat to the Israeli army.”

Hamas, however, says it will not move its armed struggle with Israel outside the Palestinian territories, and this was reiterated July 23 by the head of Hamas' political bureau, Khaled Meshaal. Still, the growing Israeli accusations about the released and expelled Hamas detainees may be causing Israel to reconsider its bet that released detainees would not be involved in armed operations against it in the future.