Is Hezbollah looking to restore its image through the West Bank?

In light of allegations about the discovery of Hezbollah-affiliated armed cells in the West Bank, some sources say that Hezbollah might be seeking to regain the popularity it lost when it got involved in the Syrian war by militarily supporting Palestinians in their fight against Israel. 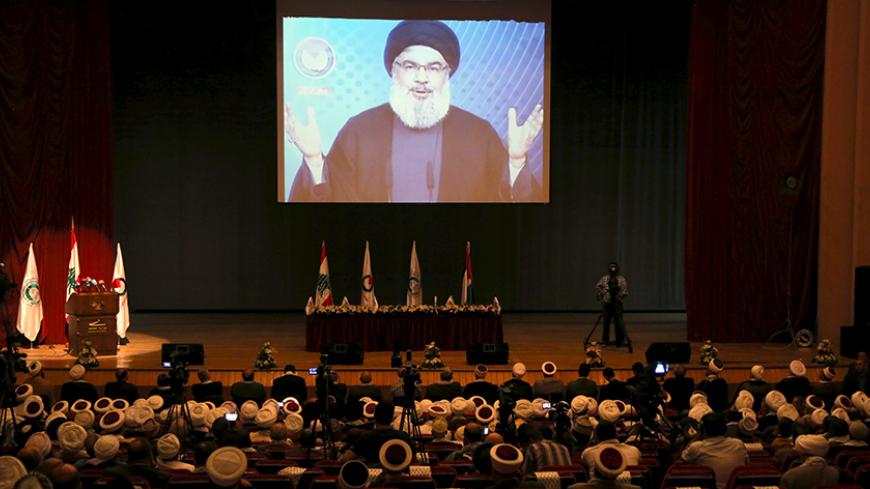 Lebanon's Hezbollah leader, Hassan Nasrallah, addresses his supporters via a giant screen during a ceremony in support of Palestine, in Beirut, July 28, 2015. - REUTERS/Aziz Taher

On Aug. 30, Israeli daily Maariv quoted Israeli security sources as saying that a Hezbollah-linked armed network is operating in the West Bank to carry out armed operations inside Israel by recruiting members of Fatah’s Al-Aqsa Martyrs Brigades.

A senior Palestinian security official told Al-Monitor on condition of anonymity, “A number of Palestinian militants informed the Palestinian security services that they received calls from Hezbollah in Lebanon. The number of those who have joined Hezbollah in the West Bank is unknown at present, and Hezbollah is taking advantage of the financial strait of those it communicated with. In the past months, it has transferred tens of thousands of dollars to those who have joined it.”

He added, “The investigations that the Palestinian security services carried out with some armed members revealed that the number of those who agreed to join Hezbollah’s activities does not exceed 10. Yet, a single armed operation they carry out in the West Bank is enough to turn things upside down, as it might turn from being a specific and limited individual operation into a more dangerous and complicated situation.”

Al-Monitor contacted Hezbollah to talk about the Israeli accusations and the Palestinian statements, but its media and political officials did not respond.

Hezbollah’s silence and refusal to make any comment — by denying or confirming the Israeli reports — are understandable. This is because Hezbollah’s denial of the formation of armed cells in the West Bank would suggest that it has given up the demand to confront Israel, despite the Israeli reports accusing Hezbollah of planning operations against Israel. It would also undermine its credibility among Palestinians, who fault it for being involved in the Syrian civil war.

By confirming the formation of Palestinian military groups, Hezbollah would be subject to Lebanese popular and official pressure that accuses it of exposing Lebanon to the danger of an Israeli response to any military operation carried out by Hezbollah’s cells in the West Bank.

On Sept. 1, retired Lebanese Brig. Gen. Amin Hoteit, who is a close associate of Hezbollah, ruled out the possibility of establishing Hezbollah cells in the Palestinian territories, and accused Israeli and Palestinian intelligence agencies (which he did not identify) of circulating information with the aim of pointing fingers at a particular party (which he also did not identify) in case the ongoing truce negotiations between Hamas and Israel failed.

Husam Badran, the Hamas spokesman, told Al-Monitor, “Hamas does not see any truth in the Israeli allegations regarding Hezbollah joining the confrontation in the West Bank. The Israeli accusations may be part of the Israeli attempts to influence the security in the West Bank, and to show that the armed resistance — which has started to recover there — is managed by non-Palestinians.”

Badran, who is also a former commander of Izz ad-Din al-Qassam Brigades, Hamas’ military wing, in the northern West Bank, added, “In principle, the Israeli occupation poses a threat to the Palestinians and Arabs of the region, and everyone has the right — and even the obligation — to face this occupier by all available means, provided that the activity serves the Palestinian cause away from any other calculations.”

It is not the first time that Hezbollah tries to reach the West Bank. In October 2010, the Shin Bet arrested a Palestinian citizen as she was trying to take a CD given to her by Hezbollah to the West Bank; the CD included instructions for Palestinian militants on how to carry out armed operations.

In addition, the Brigades of Imad Mughniyeh, named after Hezbollah’s military commander who was assassinated in February 2008, claimed responsibility for several armed operations against Israeli targets in the West Bank in 2009-10.

On June 8, 2014, Israel Defense, the Israeli military website, revealed information on Unit 133, a secretive unit of Hezbollah tasked with carrying out military operations against Israel from the West Bank.

Hezbollah seems keen on following up on the Palestinian situation, as the Hezbollah-affiliated Al-Manar satellite TV station broadcast the Palestinian developments in the West Bank, the latest of which is the Israeli army’s raid in the city of Jenin that resulted in violent clashes with armed Palestinians on the night of Aug. 31.

At the same time, the Israeli disclosure of Hezbollah’s alleged military movement in the West Bank may be associated with the Iranian remarks on the same issue. Ruhollah Hosseinian, a member of the Islamic Shura Council, revealed Aug. 18 that 100 members of the Iranian parliament urged President Hassan Rouhani to arm the West Bank. Iran is considered the big brother of Hezbollah, and its leaders’ statements are akin to decisions that Hezbollah should implement.

On July 24, 2014, Iran's Supreme Leader Ayatollah Ali Khamenei had called for the armament of the West Bank, similar to the Gaza Strip, to weaken Israel and end the suffering of the Palestinian people. He considered that the armed resistance and its expansion in the West Bank is the only way to confront Israel. This is while Iranian Defense Minister Hossein Dehghan said Jan. 21 that Tehran has a consistent policy designed to arm the West Bank.

A former Hezbollah member of parliament, who spoke to Al-Monitor on condition of anonymity, said, “Regardless of the Israeli accusations that Hezbollah formed armed cells in the West Bank, the geographical area to confront Israel is decreasing for Hezbollah day after day, as the latter [wants] to avoid engaging in a new war with [Israel] on Lebanese territory. This pushes Hezbollah to think in military terms about expanding in the West Bank.”

It seems obvious that Hezbollah is looking for a way to regain its popularity, which has dramatically declined among Palestinians and in the Arab public opinion following its involvement in the Syrian war alongside the Syrian regime. It seems the best way to do so is to confront Israel to make Palestinians temporarily forget about Hezbollah’s involvement in Syria, and restore the victorious image it gained in the 2006 war when confronting the Israeli army.

However, the road to the West Bank to confront Israel is not easy for Hezbollah. Jordan, which shares a long border with the West Bank, is closely monitoring Hezbollah’s activities on its territory. At the same time, the Israeli security services are tracing any communication between the Arab citizens of Israel and any hostile party outside Israel.