As it searches for the kidnapped teenagers, Israeli decision-makers are considering how their actions will affect Hamas’ influence in the long run. 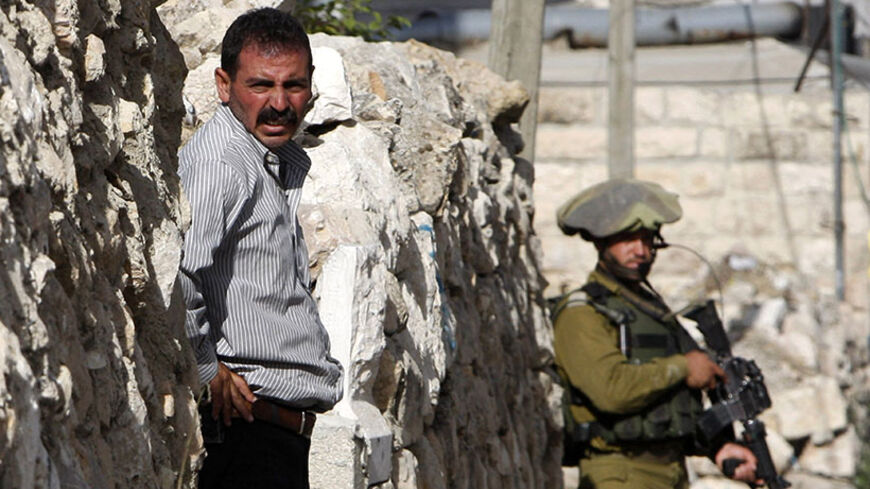 A Palestinian man stands outside his house as an Israeli soldier takes part in an operation to locate three Israeli teens in Hebron, June 19, 2014. - REUTERS/Mussa Qawasma

As of June 19, the Israel Defense Forces (IDF) has arrested about 280 Palestinians, out of which 51 are Hamas activists who had been released as part of the deal for the return of Gilad Shalit. These arrests are part of Operation Brother’s Keeper, as the search for three abducted youths — Eyal Yifrach, Gilad Shaar and Naftali Frenkel — continues throughout the West Bank. The biggest dilemma for the security services is how to successfully fight Hamas activists and leaders without discovering in a few months or years that the moves against the movement did not weaken it but only solidified its ranks.

The question of questions that has been haunting Israel throughout the years of its war against Hamas is what is the most efficient weapon of deterrence against the movement? Paradoxically, in certain cases, military operations that were intended to scare the movement’s leaders and activists actually rapidly increased support among the Palestinian public for Hamas. This is what happened during the second intifada, when Hamas was viewed by the Palestinians as a victim, and its leaders succeeded in translating these feelings into triumph at the ballot box during Palestinian Authority (PA) elections in January 2006.

Several months later, the kidnapping of the Israeli soldier Shalit brought another round of conflict between Hamas and Israel. Prime Minister Ehud Olmert ordered the IDF to conduct a large-scale military campaign in Gaza, Operation Summer Rains, which lasted for five months. The strategy behind the operation was to put as much pressure as possible on Gaza's population. The assumption was that the Palestinians would tire of Hamas and apply counterpressure on the movement’s leadership, thus prompting Shalit’s release by his kidnappers.

About 400 Palestinians were killed during the course of Operation Summer Rains, about a third of them civilians. Under orders of the political leadership, the IDF destroyed infrastructure in Gaza, such as bridges, buildings and roads, including a power station whose bombing caused a massive blackout that lasted months. Operation Summer Rains did not, however, lead to Shalit’s release. After the fact, it was discovered that the operation had only raised the "price" on the abducted soldier. Today, it seems that the lesson has been learned. Olmert’s mantra of “The boss has gone mad,” as market vendors shout, proved to be a fallacy. As we know, Shalit was released in a prisoner exchange deal after five years, in October 2011.

Today’s Israel after the abduction of the three teenagers from the Etzion settlement bloc is not the same Israel of Shalit’s abduction. This time, the IDF did not bomb power stations, damage civilian infrastructure or even assassinate movement leaders. The working assumption is that pressure on the civilian population, whether in the West Bank or the Gaza Strip, will not help the IDF find the abducted youths. Operation Brother’s Keeper is entirely different from Operation Summer Rains.

Some human rights organizations in Israel have complained about Israel sealing off Hebron and about the city's 200,000 residents not being allowed to leave. The closure is not simply, however, collective punishment designed to make life difficult for the city’s residents. Rather, the closure is the result of an assessment that Hamas’ military infrastructure in Hebron is responsible for the abduction. Door-to-door searches and arrests of Hamas activists may well uncover a lead to the whereabouts of the three boys, and as such are deemed necessary operational tactics under the circumstances. This closure cannot be compared to the Operation Summer Rains tally of hundreds of Palestinians slain in Beit Lahiya, Beit Hanun and Jabaliya in the Gaza Strip after Shalit’s kidnapping. By contrast, the current operation involves several dozen arrests, but no casualties or wounded.

This modus operandi so far requires total cooperation between the Palestinian security apparatus and Israel. The IDF preferred to keep the security coordination under wraps to avoid embarrassing Palestinian President Mahmoud Abbas and the rest of the PA, but surprisingly, Abbas revealed the cooperation himself. In a June 18 speech at a convention of the foreign ministers of the Organization of Islamic Cooperation in Saudi Arabia, Abbas fearlessly declared that he had instructed the Palestinian security apparatus to heighten cooperation with Israel to bring the abducted boys back to their families. Such a declaration of cooperation with Israel in front of Arab foreign ministers in Saudi Arabia is no minor affair. Abbas' plan could be effective and last so long as the “boss doesn’t go mad.”

Meanwhile, the Israeli security apparatus is considering the possibility of adopting another weapon of deterrence, one that has been tried in the past. On Dec. 17, 1992, Prime Minister Yitzhak Rabin decided to expel 415 Hamas and Islamic Jihad activists to southern Lebanon after a Hamas squad abducted and murdered Israeli border policeman Nissim Toledano. The security system had advised the political leadership to carry out the expulsions on the assumption that it would be a powerful weapon in deterring Hamas. It was also intended to assist the defense system, the IDF and Shin Bet in clearing the area of troublemakers and terror attack planners.

In reality, the long stay in the tent encampment in Marj al-Zohour in southern Lebanon became a formative moment in the lives of the movement’s leaders and helped them consolidate its future leadership. Those leaders — Prime Minister Ismail Haniyeh, Mahmoud al-Zahar, Abd al-Aziz Rantisi, Ismail Abu Shanab (the last two later killed by Israel) and others — would tell of how their sojourn at the deportation camp, which received intensive international coverage at the time, served as a melting pot and shaped their path after they returned to Gaza and the West Bank.

The idea of deporting the hundreds of Hamas activists recently detained is now the focus of diplomatic and security assessments of the situation. This time no one is talking about expulsion to Lebanon, where Hezbollah operatives are likely to give the deportees protection and refuge. Expulsion to Syria is also not very realistic. The Israeli-Syrian border is currently a sensitive and explosive issue, and any change could produce unwelcome results.

Senior security officials take pleasure in the idea, which obviously will never be implemented, of sending a series of Hamas members through the border crossing in the Golan Heights straight into Syrian territory. The hope would be that Syrian President Bashar al-Assad’s people would know how to settle their accounts with Hamas for the betrayal by political bureau head Khaled Meshaal, who jumped ship and fled the warm welcome extended to him by Assad just when Assad really needed him.

Thus, out of all places, only Gaza remains a reasonable destination for Hamas' deported leaders and activists from the West Bank. Despite the apparent advantages of "mopping up the territory" in the West Bank and again creating a "melting pot" in Gaza, there are many risks involved, some in the short term but mainly in the long run.

Previous experience shows that for every person in Hamas’ military wing eliminated or captured, there are at least three potential successors who will rise. And those successors — substitute field leaders, activists promoted to replace incarcerated or eliminated leaders — always try to shore up their new positions via the pacification of terror attacks and by building stronger and tighter infrastructures than those of their predecessors. They have to prove their legitimacy for inheriting the role of the martyr or prisoner and avenge his blood or imprisonment.

In other words, the danger is that one organizational infrastructure will split into two: one consisting of the deportees in the Gaza Strip and the other their heirs in the West Bank. Both will become active Hamas hubs that will challenge each other. The Gaza deportees will change course from conducting field activities, which were taking place under the noses of the Palestinian security apparatus, to a track of movement leadership. Meanwhile, those in the West Bank will deal with rehabilitating and restoring the damaged organizational infrastructure.

What, then, is the most effective deterrent against a movement whose leaders boast that every attack only makes it stronger and more respected among a broad swathe of the Palestinian public, a public that awards it points again and again, after each and every round of conflict with Israel, for what it considers a sacrifice?

In past talks with Al-Monitor, former Defense Minister and military chief of staff Shaul Mofaz claimed, probably justifiably, that the most effective weapon and deterrent against Hamas is the elimination of its political-diplomatic leadership. Mofaz was the main proponent of the two operations that wiped out the movement’s founder, Sheikh Ahmed Yassin, and his successor, Abdel Aziz Rantisi. Both were assassinated within a month, in March and April 2004, after which suicide attacks in Israel stopped.

What seemed like a quick and effective magic bullet in the spring of 2004, however, is far more complicated in the summer of 2014. In every military confrontation between Hamas and Israel over the past decade — and they have been countless — the only consideration stopping the IDF and decision-makers from recycling these two operations has been fear of a total loss of control in Gaza.

There is no greater paradox. Israel is forced to sustain the rule of Hamas in its current form for fear that wiping out its leadership will result in chaos in Gaza. It fears that Islamic Jihad or other extremist groups linked to the global jihad will succeed Hamas' leadership. In other words, Israel is concerned that the devil it knows will be replaced by one that's worse.

The main question is therefore how long can this paradox serve Hamas and work in its favor? According to Mofaz, the greater paradox is that Israel has become ensnared in the wizardry of the paradoxes it has created — and this is also its biggest mistake.