The propaganda film produced by Hamas' military wing showing Israeli soldiers kidnapped since the 1980s is nothing more than a sign of weakness. 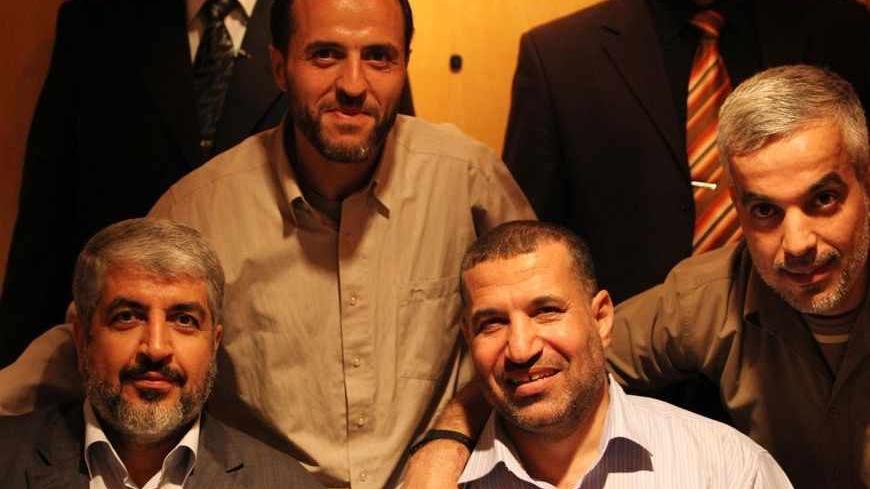 Hamas leader Khaled Meshaal (L) poses with Ahmed al-Jabari (bottom R), then the top commander of Hamas' armed wing, and Palestinian prisoners (back) freed in a prisoner swap deal between Hamas and Israel, in Cairo, Oct. 18, 2011. Israeli soldier Gilad Shalit and hundreds of Palestinians crossed Israel's borders in opposite directions in a thousand-for-one prisoner exchange; Jabari was later killed by Israel. - REUTERS/Hamas Office

Almost two years have passed since the Shalit deal was completed and signed in October 2011, yet the Izz ad-Din al-Qassam Brigades, Hamas’ military wing, still continues to recycle that “great achievement” ad nauseam.

In a video clip produced by the Qassam Brigades to mark the seventh anniversary of Gilad Shalit’s abduction, the group “took inventory” of those Israeli soldiers who were kidnapped ever since it was founded. Dramatic, almost Wagnerian, music accompanies the photos of Israeli soldiers Avi Sasportas and Ilan Saadon (1989), Alon Karavani (1992), Shahar Simani (1993), Yaron Chen (1993), Nachshon Wachsman (1994), Sasson Nuriel (2005) and Shalit himself (2006), who was returned to Israel five years after his abduction.

The clip includes never-before released photos of Shalit during his last day in captivity, up until he was brought to the Rafah Crossing (including that unforgettable scene in which Ahmed Jabari, the head of Hamas’ military wing, who was assassinated at the start of Operation Pillar of Defense, drags Shalit brusquely by the hand to where the prisoner exchange with Israel would take place).

The clip ends with a Hebrew text reading, “We’ve started toward our goal, and we will reach the end.”

Exactly what end is that? The use of Hebrew signifies that the clip was intended for Israelis, too, but was it an attempt at intimidation? And what exactly should Israelis be intimidated about?

The answer is simple: The military wing is doing everything it can to prove that it is still a player. It wants to demonstrate that changing attitudes toward the diplomatic process among the movement’s political leadership do not impact them and do not stop them from preparing for what is yet to come. This can also be set against another fact, which has already been presented on this site. Hamas’s arsenals have long been depleted, and there is no sign of them being restocked in the foreseeable future.

Shalit was abducted on June 25, 2006, just three months after Hamas established its first government in the Gaza Strip under Prime Minister Ismail Haniyeh. The election victory was something of a surprise to the Hamas leadership. By the morning of Jan. 26, 2006, when the first results were announced and the magnitude of the victory over Fatah first became apparent, Haniyeh, who headed the list, was already left with no choice but to keep his movement’s campaign promise of “Change and Reform.”

The change he promised was necessitated by the realities he faced, i.e., the miserable state of the Gaza Strip after the second intifada. The task that landed on Haniyeh’s shoulders was to concern himself with the day-to-day lives of average Palestinian civilians, who suffered under Fatah’s corrupt regime, and to restore personal security among the people. And he had to do this after those people had suffered for years during the intifada.

As a movement that sprung from the wretched and overcrowded refugee camps and from the dawah institutions (Hamas welfare organizations), Hamas tried to find a happy medium between being a militant Islamist jihadist movement and its commitment to tend to the most basic needs of its population. In effect, it was forced to choose between guns or food. In retrospect, seven years later, it is clear that Hamas has been unable to “provide the goods” in either case.

It was only after the elections that Khaled Meshaal, the head of Hamas’ political bureau, began sending his first feelers out to Israel in an effort to bring stability to Hamas for the first time in its history, as a legitimate political movement. He even offered then-Prime Minister Ehud Olmert’s government a diplomatic arrangement, which would have allowed the Hamas government to survive and keep its promises. But while members of the movement’s political bureau in Damascus were hard at work trying to find a formula that would allow Hamas to preserve its first government, Jabari and other senior members of the military wing conducted a mini-coup within the movement and destroyed any bargaining chips that Hamas had.

Jabari, along with two other organizations (the Popular Resistance Committees and the Army of Islam), assumed responsibility for the attack on Israeli military outpost Kerem Shalom and the abduction of Shalit. This presented the embarrassed political leadership with a painful fact with which to contend and a labyrinthine and risky way forward.

Backed by the military wing, Jabari forced the Hamas leadership to adopt the path of armed resistance. This cost the lives of thousands of Palestinians and resulted in an enormous economic crisis, which continues to plague the residents of Gaza up until today.

Following the attack on Kerem Shalom and the abduction of Shalit, the Israel Defense Forces launched its first military operation to bring about Shalit’s release. Some 500 Palestinians were killed in that operation, which was dubbed Operation Summer Rain. In addition to the cost in lives, the operation also caused severe damage to the local infrastructure. The destruction of most of the transformers at the electrical plant in the central Gaza Strip continues to affect Gaza today (the people of Gaza still suffer from serious shortages of electricity on a routine basis).

So, instead of carrying on the braggadocio with raucous, intimidating film clips, the senior members of Hamas' military wing would do better to look back and try to imagine what might have happened if it had not have violated the movement's pre-election diplomatic policies. Would the first Hamas government headed by Haniyeh have succeeded in becoming a governing movement that poses a real, responsible challenge to the PLO, which boasted for years that it was the sole legitimate representative of the Palestinian people? Would the world have accepted the Hamas government and allowed the people of the Gaza Strip to live a normal life? And what about the rift between Gaza and the West Bank, which continues until today? And the closure imposed on the Gaza Strip? And the economic collapse? The questions go on and on.

As it marks seven years since the attack on Kerem Shalom and the abduction of Shalit, the Qassam Brigades would do well to take these questions into consideration before releasing some boastful clip of the military wing dancing over spilled blood. Otherwise, they could well bring the entire movement to another dead end, even as its political leaders are striving to bring about “Change and Reform.”

Shlomi Eldar is a contributing writer for Al-Monitor’s Israel Pulse. For the past two decades, he has covered the Palestinian Authority and especially the Gaza Strip for Israel’s Channels 1 and 10, reporting on the emergence of Hamas.