Fatah leader on kidnappings: 'Everyone is in big trouble now'

In an interview with Al-Monitor, senior Fatah official Fares Qadura warns of escalation, saying that everyone knows that Israel will not negotiate a prisoners exchange for the three kidnapped youths. 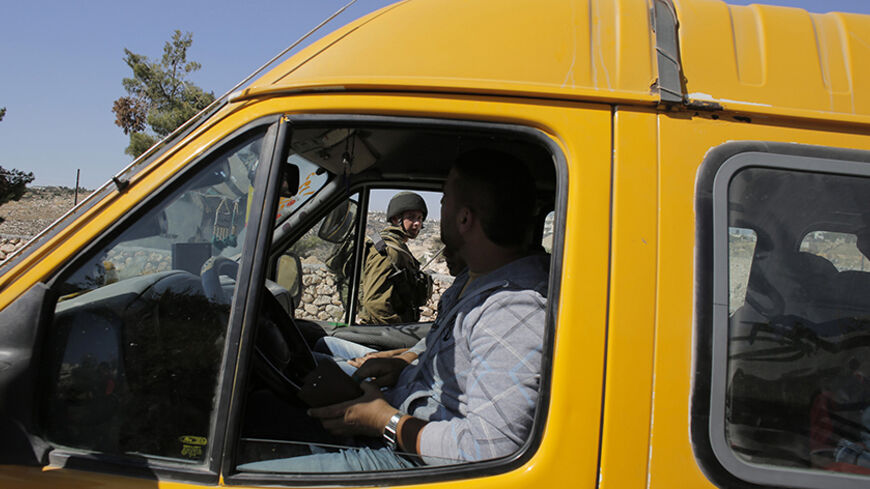 An Israeli soldier looks at Palestinians inside a vehicle during searches for three Israeli teenagers near the West Bank city of Hebron, June 14, 2014. - REUTERS/Ammar Awad

"This morning I can say what I was unable to say yesterday before the extensive wave of arrests of Hamas members in Judea and Samaria. Those who perpetrated the abduction of our youths were members of Hamas. … This has severe repercussions."

If Hamas did indeed carry out the abduction, it will be the fourth time that members of its military wing have set policy for the movement and forced the political leaders to fall into line with them — and this only two weeks after the Fatah-Hamas Palestinian unity government was formed in Gaza and Ramallah.

The Hamas movement has been trying to prove to everyone that it is a legitimate political movement, especially since its victory in the elections for the Palestinian Authority in 2006. But unlike other political movements whose heads and leaders pave the way forward, Hamas is a movement whose armed members force their leadership to deviate from their chosen path time and again, mainly when the movement reaches a crossroads.

In the middle of June 2003, at the height of the second intifada when late Palestinian Liberation Organization (PLO) leader Yasser Arafat was still locked away in the Mukataa Compound in Ramallah, a "hudna," or truce, was declared for the first time between all the armed Palestinian organizations and Israel. This agreement included the Hamas movement that had led the second intifada. Sheikh Ahmed Yassin, Hamas’ leader and founder, gave his blessing to the cease-fire and halting of suicide bombers in exchange for Israel’s commitment to stop its attacks on Gaza and the West Bank. Yassin even explained to those who wondered why he agreed, as related in my book "Eyeless in Gaza:" "It is allowed to make a hudna in order to have some rest and also in order to build up strength."

The hudna’s prime advocate was the prime minister of the Palestinian Authority (PA) at the time, Mahmoud Abbas. Abbas sent two emissaries to Damascus (Fares Qadura and Ahmad Ghanem) to meet with Khaled Meshaal, the head of Hamas’ political bureau, and Ramadan Abdullah Shalah, secretary-general of the Islamic Jihad. The hudna went into effect and everyone, especially the Palestinian public, felt that the intifada had ended and they could finally breathe easy.

On Aug. 19 of that year, only 52 days after the hudna went into effect, a Hamas activist from Hebron blew himself up on the No. 2 bus in Jerusalem, thus killing 23 Israelis. This attack, which killed children and youths returning from a bar mitzvah celebration at the Western Wall, was planned by the Qawasmeh clan from Hebron. They are the main foundation of Hamas in the city. This act came in retaliation for the liquidation of clan member Abdullah Qawasmeh, who then bore the title of head of the military wing, the Izz ad-Din al-Qassam brigades, in the city.

The Qawasmeh family is one of the three largest clans in Hebron. At least 15 of its sons were killed during the intifada, either in conflicts with the Israel Defense Forces (IDF) or in suicide bombings. The power of this clan in Hebron was and is so strong that they do not abide by the general line dictated by Hamas leadership. They do not even obey the movement’s founder Sheikh Ahmed Yassin, who, as previously mentioned, supported the hudna at the time. The collapse of the hudna brought about by the Qawasmeh family eventually also led to the liquidation of the movement’s leaders in Gaza.

Seven months later, in the course of the blitz of assassinations of Hamas heads (including Yassin and Abd al-Aziz Rantisi), Meshaal offered a cease-fire to Prime Minister Ariel Sharon via mediation by then-Egyptian Intelligence Minister Omar Suleiman. Hamas committed itself to halting attacks against Israel, and Israel agreed in exchange to stop eliminating Hamas’ political leadership.

The understandings between the sides endured for exactly half a year. On Aug. 31, 2004, Imad Qawasmeh sent two people (one of them his cousin Ahmed) on a mission from Hebron to carry out a suicide bombing in Beer Sheva. This terror attack killed 16 Israelis, most of whom were youths enjoying their last day of summer vacation in the southern city. Meshaal was then forced to explain to the Egyptian intelligence minister that this was a local, independent job, and that Hamas' political leadership would do everything in its power to impose its authority over the military branch, including local armed structures. This never happened.

Only three months after the Hamas government headed by Prime Minister Ismail Haniyeh was formed in Gaza, the movement’s leaders were still trying to prove to the world they were no longer a terrorist organization but a legitimate, elected political movement. Meanwhile, head of the military wing in Gaza Ahmed al-Jabari joined forces with the leader of the Popular Resistance Committees Jamal Abu Samhadna. Together, they carried out the attack near kibbutz Kerem Shalom, in which soldier Gilad Shalit was kidnapped. The political leadership in Damascus and Gaza had no knowledge of al-Jabari’s plans and conspiracies, which were run underground and behind their backs. Thus, all the attempts by Meshaal and the members of the political bureau to whitewash the Hamas government in the international community were doomed to fail. Even more than that, Meshaal and the political bureau members were forced to maneuver around the obstacle course placed by al-Jabari. After the Hamas victory in the elections for the Palestinian Authority and establishment of their first government ever, the military wing people led Hamas on a dangerous path with severe ramifications. This, too, was at one of the movement’s critical junctures. For more than five years, hundreds of Palestinians were killed and thousands injured in a series of military operations on the Gaza Strip, on the backdrop of the abduction of Gilad Shalit.

If the Hamas bastion in Hebron is indeed once more behind the abduction of the three rabbinical college boys, then they’ve done it again. Only two weeks after the founding of the Palestinian unity government, when reconciliation with Fatah assures Hamas a lifeline from the tremendous pressures now faced by the movement, it seems the Hamas infrastructure in Hebron has doomed the fate of the unity government with Mahmoud Abbas — just now, after the government has earned international recognition.

Fares Qadura, head of the Palestinian Prisoners Club in the West Bank and a Fatah head, admitted in an interview with Al-Monitor that the abduction of the youths is a real game-changer that has reshuffled all the cards, precisely at a time when the Palestinian prisoners’ hunger strike has gained ground and won international public interest.

Al-Monitor:  If this is indeed a Hamas cell, this time, not only Hamas has a problem. The Palestinian Authority and Mahmoud Abbas also have a problem.

Qadura:  If Mahmoud Abbas is in hot water, that doesn’t mean that Netanyahu isn’t in trouble. Everyone is in big trouble now. Someone has to think how to extricate ourselves quickly, and not entangle Mahmoud Abbas even more. How will it help Netanyahu if Mahmoud Abbas gets into trouble; where will that lead to?

Al-Monitor:  As a former prisoner, a field leader, how do you interpret the response to the kidnapping on the Palestinian street?

Qadura:  The Palestinian street is frustrated and desperate at the circumstances, thus anything that angers Israel gets a counter-response. People think with their guts, not their heads. Still, I can tell you that there is a lot of concern over the future and great worry over what will happen next.

Al-Monitor:  Do people believe that Israel will release prisoners in exchange for the three youths, like in the Shalit prisoner-exchange deal?