The Hebron-based Qawasmeh family may not be under the direct control of Hamas, but its actions have placed Hamas in Israel's sights with regard to the kidnapping of three Israeli students. 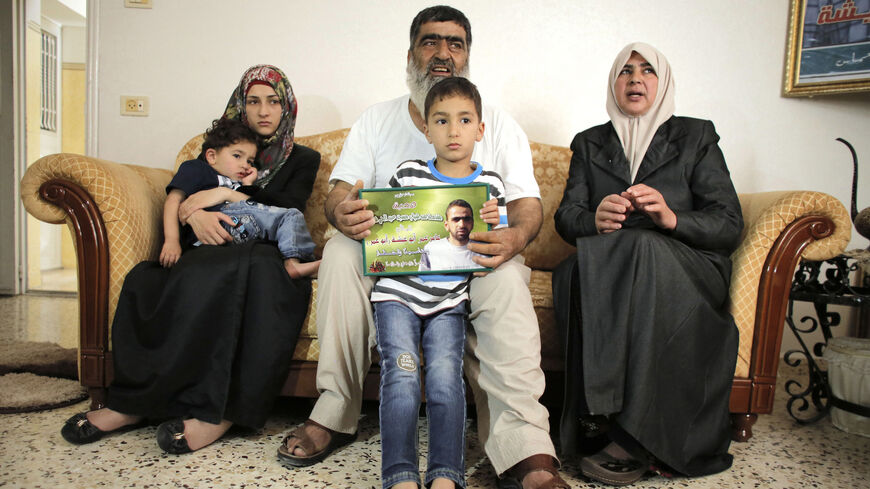 A son of Amar Abu Aisha holds his father's picture as he sits with his grandfather (C), grandmother (R) and his mother in their house in the West Bank city of Hebron, June 27, 2014. - REUTERS/Ammar Awad

On June 26, the Shin Bet allowed the release of the names of the two men suspected of orchestrating the kidnapping of the three yeshiva (religious high school) students in the Etzion settlement bloc. The suspects are Marwan Qawasmeh and Amar Abu Aisha.

According to Palestinian sources, Palestinian security forces had already reported to Israel that these two suspects had disappeared from Hebron within 24 hours of the abduction. That was the first clue in the investigation and the reason why Israel pointed an accusatory finger at the Hamas infrastructure in Hebron. But while Israel continues to accuse the Hamas movement and its leadership of being responsible for the abduction, Palestinian security forces attribute the abduction to the Qawasmeh clan of Hebron specifically. Though the clan is known for identifying with Hamas, it also has a well-earned reputation as troublemakers. Not only does it tend to ignore the movement’s leaders. It even acts counter to the policies being advocated by the movement.

That is why officials in the Palestinian Authority (PA) were shocked by the timing of the three boys’ abduction, just two weeks after the establishment of a Palestinian unity government. After all, the very creation of this new coalition came with the assumption that the Hamas leadership had come to terms with reality and moderated their positions.

Enter the Qawasmeh clan. The total number of people belonging to the clan is estimated at about 10,000, making it one of the three largest clans in the Mount Hebron region. At least 15 members of the family were killed during the second intifada, nine of them while committing suicide attacks against Israel. All of the terrorists lived in the Abu Qatila neighborhood, within a radius of less than 1 kilometer (0.6 mile) from one another. Whenever the head of the terrorist organization within the clan was assassinated or arrested by Israel, one of his brothers or cousins was selected to replace him.

For instance, when the head of the group, Abdullah Qawasmeh, was assassinated during the second intifada, he was succeeded by his cousin Basel Qawasmeh. When Basel was assassinated by Israel, the person selected to succeed him was Imad Qawasmeh, who was apprehended by the Israel Defense Forces (IDF) in October 2003.

Marwan Qawasmeh, the man behind the abduction, emerged as a dominant figure in the clan after Israel arrested Imad Qawasmeh and sentenced him to life in prison.

Each time Hamas had reached an understanding with Israel about a cease-fire or tahadiyeh (period of calm), at least one member of the family has been responsible for planning or initiating a suicide attack, and any understandings with Israel, achieved after considerable effort, were suddenly laid waste. If there is a single family throughout the PA territories whose actions can be blamed for Israel’s assassination of the political leadership of Hamas, it is the Qawasmeh family of Hebron.

On Aug. 19, 2003, after a tahadiyeh was reached between Israel and all of the Palestinian factions, with the support of Hamas leader Sheikh Ahmed Yassin, two suicide bombers blew themselves up on the No. 2 bus in Jerusalem. Some 23 Israelis were killed in the attack, including seven children. All of the passengers on the bus were on their way back from prayers at the Western Wall to mark the end of the Sabbath. Most of them were yeshiva students. The attack put an abrupt end to the tahadiyeh just 52 days after it was announced. The bombing was intended to avenge Israel’s assassination of Abdullah Qawasmeh three days before the tahadiyeh came into force. The Qawasmeh family planned and implemented the attack during a cease-fire, which was supposed to have ended the second intifada, a cease-fire that had the support of Yasser Arafat, then-PA chairman, his Prime Minister Mahmoud Abbas and, of course, Yassin, the leader of Hamas.

Two days later, Israel assassinated one of the most prominent leaders of the political wing of Hamas in Gaza, Ismail Abu Shanab.

Abu Shanab was considered one of the more moderate members of the movement at the time. In a conversation he had with Hasan Abu Zayad, an Arabic-language reporter for the Israeli Public Radio (Kol Israel), Abu Shanab said that the attack in Jerusalem was a serious error by people who disobey orders, that the matter should be investigated and that those responsible should be punished. Instead, what happened was that Abu Shanab was assassinated by Israel, the intifada heated up again, and as part of the armed conflict, Israel assassinated the two senior leaders of Hamas, Yassin and his heir, Abd al-Aziz Rantisi.

Nor did the Qawasmeh family comply with the understandings reached between Israel and Hamas after the assassination of the movement’s senior leaders. Following these assassinations, Israel contacted the head of the movement’s political bureau, Khaled Meshaal, through the Egypt’s then-Minister of Intelligence Omar Suleiman, saying that if Hamas stopped its attacks, Israel would reciprocate by putting a stop to its assassination campaign. It was because of these understandings that Hamas did not avenge the assassination of its leaders. Half a year later (Aug. 31, 2004), however, two terrorists, Nassim Subhi Jabari and Ahmed Qawasmeh, left Hebron to launch a double suicide attack on two buses in Beersheba, killing 16 Israelis.

So once again, Suleiman was forced to call then-Prime Minister Ariel Sharon with a message from Meshaal that what had happened was a mishap. The armed gang from Hebron had been acting counter to Hamas’ new policy.

The same is true now. Marwan Qawasmeh and Amar Abu Aisha have brought Hamas to a place where its leadership never intended to go. By kidnapping the three Israelis, the Qawasmeh family decided to take the leaders there anyway. In each of the previous events, Hamas’ political leaders were forced to align themselves with the movement’s military wing. Not one of them dared to say anything. They wouldn’t dare condemn a kidnapping ostensibly intended to release Palestinian prisoners held by Israel, or to denounce some terrorist attack, ostensibly launched in retaliation to the assassination by Israel of some Hamas activist or other.

And now for the dispute between Israel and Abbas. We have already noted that Israel holds Hamas responsible for the abduction, while the PA considers the actions of the Qawasmeh family a “gray area,” which cannot be used as an indicator for what is happening within Hamas. That is why Abbas is not taking apart yet the unity government he formed just two weeks before the abduction, a government that was supposed to represent a fresh start in the relationship between Fatah and Hamas.

That is also why Meshaal said in an interview with Al Jazeera, “We cannot deny nor can we confirm that Hamas committed the kidnapping.” Meshaal also added that he has no idea where the abducted teens are.

At this point, it is quite possible to believe Meshaal when he says that he knew nothing about the kidnapping and that he has no idea what happened to the teens. But Meshaal and the leaders of Hamas have a problem. As long as they don’t denounce the Qawasmeh family, and as long as they let the family take them down a dead end time after time, the leaders of the movement will be forced to pay the price.

Abu Shanab, Yassin and Rantisi paid with their lives for what the Qawasmeh family did. Hamas is all tangled up in the same trap, with and Israeli sword hovering over them again. This time, however, when the sword lands, Hamas will not be able to lay all of the blame on the rebellious Qawasmeh clan from Hebron.