Past experience should teach Israel that the most efficient deterrent against Hamas terror is to threaten its hegemony in the Gaza strip — and point out that this time around, no Arab country will come to its rescue. 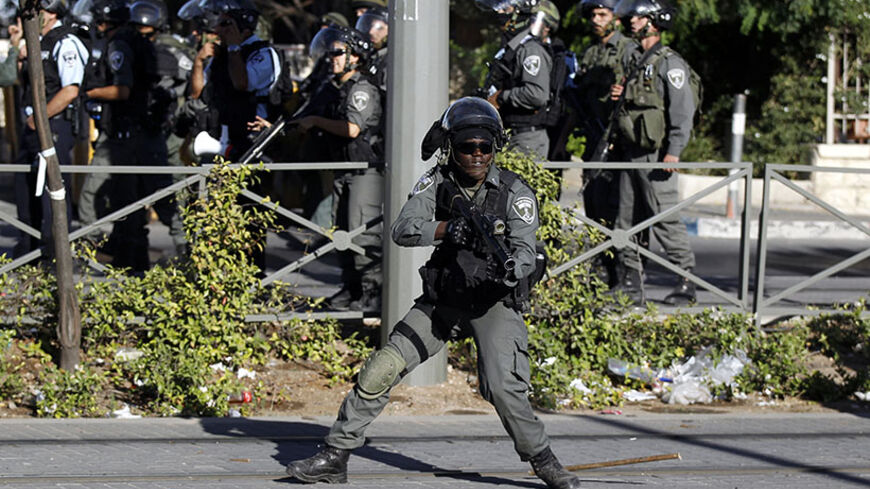 An Israeli border police officer takes position during clashes with Palestinian stone-throwers in Shuafat, an Arab suburb of Jerusalem, July 2, 2014.

“Hamas is responsible and Hamas will pay,” said Prime Minister Benjamin Netanyahu at the emergency Security Cabinet meeting June 30 following the discovery of the bodies of Gil-Ad Shaer, Naftali Frenkel and Eyal Yifrach. Now it emerges that the three kidnapped youths were murdered by their abductors 18 days ago, close to the time of their June 12 abduction.

The desire to extract a steep price from Hamas is more than just an expression of anger and an attempt to assuage the Israeli public's desire for vengeance. It is also meant to deter Hamas. The question is: What are effective means of deterrence?

In the course of the second intifada, then-Defense Minister Shaul Mofaz used to convene a brainstorming team every Thursday in an effort to halt the wave of suicide bombers that flooded Israel. The team included the highest echelons of the defense system (Shin Bet, Mossad, Israel Defense Forces and police) and occasionally psychologists and sociologists were also invited. The goal: to formulate creative ideas for effective, efficient deterrence of the terrorists and their dispatchers.

Almost all the proposals were put into practice, including destroying the homes of terrorists, expelling terror activists, administrative detentions and waging an all-out war against the dawa institutions (Hamas’ welfare institutions). The assumption was that the planners and executors of terror attacks would hesitate to engage in murderous missions if they knew that Israel would extract a steep price from their family members. But suicide bombers continued to blow themselves up in the centers of Israel’s cities.

The wave of terror stopped only when Israel began eliminating Hamas leaders. In retrospect, it became clear to the heads of Israel’s security system that the main thing that deterred Hamas was the loss of public support for the movement. The top priority of Hamas leaders is to preserve the movement’s status and survivability.

If we translate the conclusions of Mofaz’ brainstorming team to the reality we face today after the boys' murder, the most important thing to Hamas is to maintain its regime and status as a popular movement. Over the years of its existence, Hamas was forced to make decisions that totally opposed its worldview, its ideology, the Hamas Charter and its basic principles when its leaders felt they had no other choice. On these occasions, not only were suicide attacks halted, but also the incitement and encouragement of martyrs so central to Hamas' worldview.

After this latest, heinous murder, Hamas must be made to feel that its regime is threatened.

After the Muslim Brotherhood regime in Egypt was overthrown, the new government closed the tunnels to Gaza and declared Hamas an illegal organization. At that point, Israel opened Gaza’s border crossings almost completely to foodstuffs and raw materials. The message was clear, even to Hamas' leaders: Israel has an interest in preserving their regime. But the sense of security that the status quo gave Hamas turned out to have been exaggerated.

Anyone who kept tabs on the statements by the movement’s speakers since the beginning of the abduction affair could not help but wonder how Hamas' leaders, who bowed their heads in anguish and worry to new Egyptian President Abdel Fattah al-Sisi, still dared to threaten Israel at the top of their voices. And this time, they did it from the standpoint of partners to the Palestinian Authority’s national unity government.

While the abduction took Hamas by surprise, it chose to react by verbally attacking Israel and threatening to use a “new weapon” against it. Those who listened to the threats of Hamas leaders Ismail Haniyeh, Mahmoud al-Zahar and even political bureau chief Khaled Meshaal could not help but grimace and wonder: What is the source of such exaggerated self-confidence when they have fallen to one of their lowest points ever? Their movement is isolated and unable to provide a livelihood for their armed activists and workers in Gaza.

Sami Abu Zuhri, Hamas’s spokesman in Gaza, told the al-Aqsa television channel immediately after the bodies were found, “We don’t want another confrontation with Israel, but if it is forced on us, things will look like they did on previous rounds.” He added, “Israel needs to be prepared for the price it will pay.”

Abu Zuhri rose in Hamas’ ranks through his outstanding success in the study of Islamic law at Islamic University. I became familiar with Abu Zuhri during the years I worked in the Gaza Strip and can testify that he is not disconnected from reality, but well aware of the limits of Hamas’ power. His current statements, like the ones made by Meshaal and Izzat Rishak (Hamas’ foreign relations chief), testify most of all to the movement’s fear of the consequences of the murders. They fear the price that Israel will attempt to exact from them.

Everyone knows that another round of conflict will not look like the previous ones. The Rafah border crossing will not be flung open this time, and no diplomatic delegations will emerge from Egypt and the Arab world to support Hamas leaders and encourage them to stand firm. Egyptian leaders won’t threaten Israel with revoking the peace agreements. On the contrary, Egypt's anger at Hamas is so extreme that we can assume any blow delivered by Israel to Hamas will be welcomed there.

Only a few hours after the bodies of the abducted youths were discovered in the Halhul region in Hebron, an IDF force blew up parts of the houses of suspects Marwan Qawasmeh and Amar Abu Aisha. Simultaneously, the Israeli air force attacked dozens of targets in the Gaza Strip. The goal: to show the Hamas leadership that Israel will not remain silent in the face of the murders and is intent on exacting a price from Hamas, even if the organization was not the one to give the order.

But as stated, following the conclusions of Mofaz’ brainstorming team, the leaders of the movement in and outside Gaza must understand that their regime and status will be imperiled if an escalation takes place. Hamas is caught these days between Israel and Egypt with no way out, no outside assistance and none of the regular weapon supplies it had once had. Hamas activists have launched rockets into Israel, but the IDF says that these are old and obsolete weapons with low range and precision. This failure demonstrates the limits of Hamas’ military capabilities after most of its tunnels between Gaza and Egypt were sealed.

When Israel looks for a way to make Hamas pay, it should also address another issue: those members of the so-called 'Qawasmeh family' in Hebron who have been implicated in this latest crime. Some members of the clan have a well-known history of operating as lone agents in the field, including planning and implementing terror acts in opposition to the Hamas leadership.

Senior Palestinian security officials are convinced that the problem with those members of the Qawasmeh clan involved in terror requires in-depth "root canal" treatment, separate and distinct from that addressing the Hamas movement. A Palestinian source suggested in a conversation with Al-Monitor that key Qawasmeh militants be expelled to the Gaza Strip and that the rest of the group who are under suspicion in Hebron remain under continuous surveillance.

It is doubtful whether pressure on those members of the Qawasmeh family implicated in terror will change the nature or actions of its members. In the current charged atmosphere of Israeli-Palestinian relations, it's not just about one family that wants to renew terror activity against Israel. Signs on the ground over the past months indicate that another stormy era is approaching. Therefore, Israel and the Palestinian Authority must act together, and wisely, so that things don’t get out of control.