The government of Israel has set a course for collective punishment in response to the murders of the three Israeli youth, in violation of international law. 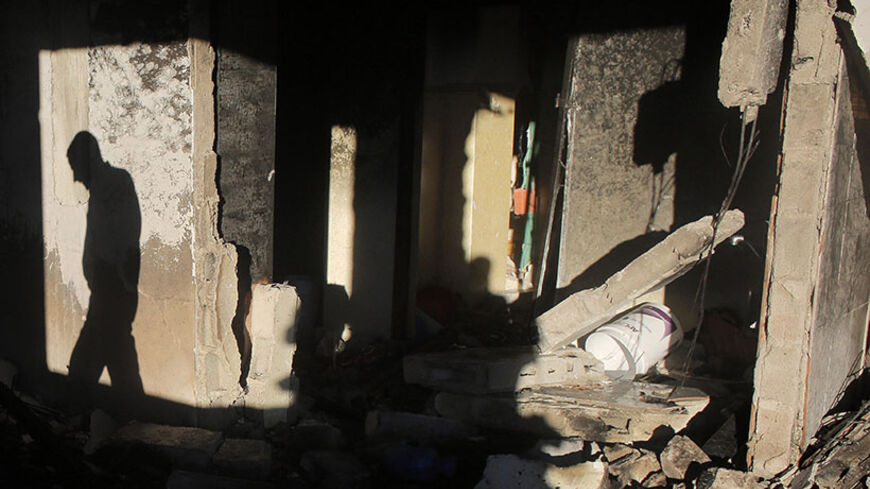 The shadow of a Palestinian man in Hebron is cast as he inspects the family home of an alleged abductor after Israeli troops reportedly set off an explosion on the top floor, July 1, 2014. - REUTERS/Ammar Awad

Twelve days of constant media coverage, often 24-hour live reporting and repeated accusations from the very top of the Israeli government of the involvement of Hamas in the kidnapping and killing of the three Israeli youths, have reached the level of hysteria.

The Israeli army, well-armed Jewish settlers and even members of the press have taken up these calls, acted on them, expounded on them and justified them.

The news of the discovery of the bodies has triggered an unprecedented wave of bloodthirsty demands of revenge that has been supported by the Israeli prime minister. Speaking to reporters, Israeli Prime Minister Benjamin Netanyahu justified acts of revenge. “Vengeance for the blood of a small child, Satan has not yet created; neither has vengeance for the blood of three pure youths, who were on their way home to meet their parents, who will not see them anymore. Hamas is responsible — and Hamas will pay,” Netanyahu said.

Not long after the news of the discovery of the bodies of the three Israeli teenagers, army units demolished a Palestinian suspect's home, and ran bombing raids on the Gaza Strip.

Settlers have also taken up their own acts of revenge. On the roads, Palestinian media reported two cases of Palestinian children being run over by settler cars. The situation in Hebron was nothing short of a volcano waiting to erupt.

But some of the worst reaction to the despicable act of killing the Israeli teens has come from politicians and pundits. When the incitement comes from the very top of the government, it is no wonder how the rest of the population acts.

International humanitarian law and the basic principles of justice are based on the concept of individual responsibility. Justice is served when violators are tried in a fair court and personally punished. Holding an entire family, clan, city or a nation responsible is nothing short of barbarism. Some Israelis justify their reaction by saying that the act of the killing of the three Israeli hitchhikers was barbaric and a result of the collective responsibility of a community that created the killers.

Such arguments lack the basic contextualization of a 47-year-old foreign military occupation coupled with an illegal settlement policy, which is in violation of the Fourth Geneva Convention banning an occupying power from transferring its people to occupied territories.

One of the worst aspects of this unbridled hatred that has been spewing on Palestinians has been the blaming of extended families for the acts of one of their members.

This stereotypical argument was fleshed out by Al-Monitor’s Shlomi Eldar in a piece that is full of this sense of collective responsibility.

In his piece, which appears to have been sourced by Israeli security officials without any attribution, the author singles out the Qawasmeh family for collective responsibility.

This accusation that the Palestinian government holds the Qawasmeh family responsible is strange, considering that Khaled Qawasmeh was until the creation of the unity government a minister for local government.

His sister, Sahar Qawasmeh, is an elected member of the Palestinian Legislative Council representing the Fatah movement.

Their father, the late Fahed Qawasmeh, was the mayor of Hebron until Israel deported him, and then he was assassinated in Amman by a radical Palestinian group. The spokesman of Fatah in Hebron is none other than Usama Qawasmeh.

Eldar castigates this large Hebron family of having a “well-earned reputation as troublemakers.”

It's totally unacceptable in the 21st century for a UN member state that is violating international law to push for solutions to a conflict it created using tribal justice.

According to Eldar, “As long as they [Hamas] don’t denounce the Qawasmeh family, and as long as they let the family take them down a dead end time after time, the leaders of the movement will be forced to pay the price.”

So an entire, large family numbering more than 10,000 must be denounced because of the alleged acts of a suspected rogue member of their community, for the Palestinians to avoid being collectively punished?

This tribalism and collective reprisal is nothing short of the age-old eye-for-an-eye doctrine that led to India’s Mahatma Gandhi's famous rebuttal: “An eye for an eye leaves the whole world blind.”