Israeli settlers are still carrying out gang assaults on Palestinians in the West Bank, with Christian clergy among their latest victims. 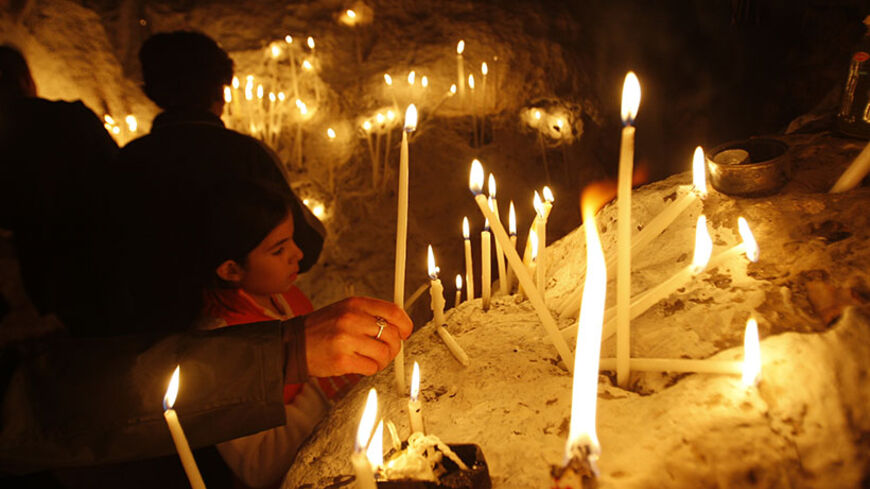 A Palestinian girl looks at candles as they are lit inside an old cave that residents say is used as a church in the West Bank village of Aboud near Ramallah, Dec. 16, 2010. - REUTERS/Mohamad Torokman

The Rev. Atallah Issawi, pastor of a Protestant church in the West Bank village of Aboud, and his wife, Hilda, were driving home the night of July 5 after attending a wedding in Ramallah. Issawi's church, along with an excellent private school in their predominantly Christian village, had been established by missionaries from the US-based Church of God in the 1960s. Traveling with the Issawis was another couple, Rev. Musa Allawi and his wife, Palestinian citizens of Israel from Ramleh.

The four passed an Israeli army checkpoint, where they were told to be careful because a group of angry settlers was roaming around. After continuing on their way, they fell into a trap and were ambushed by stone-throwing settlers.

Issawi told Al-Monitor that he felt that he was about to be killed. The Palestinians managed to speed away, despite a broken windshield and other damage to the car. All the passengers escaped injury and worse. The settlers followed them but quit the chase when the Palestinians found refuge in the nearby village of Deir Abu Mishaal. Palestinian residents there protected and comforted the travelers while they waited a few hours for the Israeli army to decide to respond to the settlers' hooliganism and order them off the roads.

Such settler attacks are occurring alongside officially sanctioned Israeli army roundups of Palestinians, including parliamentarians. The total number of prisoners has reached nearly 700 according to the Palestinian Prisoners Club. Arrests have continued after the discovery of the bodies of the three missing Israelis that resulted in the latest round of detentions.

The attack against the pastor and his companions is only one of many such incidents taking place daily involving an unarmed and rather helpless Palestinian population and settlers who are armed and ultimately protected by the Israeli military. The army rarely acts against the settlers, and the same frequency applies to attempts to punish or deter them.

Israeli authorities could not, however, allow the tragedy that befell the Abu Khdeir family to pass. On July 2, their son Mohammed, 15, was abducted from his Shuafat neighborhood in East Jerusalem, and his charred body was discovered later that day in a forest not far from the site of the 1948 Deir Yassin massacre. The security cameras of the Abu Khdeir's nearby store recorded the car used in the kidnapping and two of the abductors. The discovery of Mohammed's body triggered demonstrations that spread throughout Palestine. Accusations that the killing was an act of revenge were not restricted to Palestinians. The Latin American cartoonist Carlos Lattuf depicted Israeli Prime Minister Benjamin Netanyahu as "the fuel" that burned Mohammed alive.

The demonstrations spread so quickly in Palestine, as well as among Palestinians in Israel, that both Israeli and Palestinian leaders tried to calm the situation. Palestinian security forces summoned dozens of activists in the Dheisheh refugee camp on July 5.

Bilal, an activist with the Popular Front for the Liberation of Palestine, told Al-Monitor that officials from the Preventive Security Services summoned him and others in an attempt to persuade them to stop protesting. Large numbers of security forces were also deployed near Rachel’s Tomb, in Bethlehem, in an effort to publicly display the Palestinians' desire to lower tensions.

Israel allowed Palestinian Prime Minister Rami Hamdallah to pay condolences to the bereaved family, an act that was understood by some as possibly helping to restore order. In Nazareth, leaders of the Palestinian community in Israel met to discuss the situation and try to calm the hundreds of angry youths who had blocked main roads and confronted Israeli police in an act of solidarity with their brethren in Jerusalem.

Palestinians in the once-affluent Shuafat neighborhood were further traumatized to learn of the failed attempt to kidnap another child, Musa Zaluum, on July 1, the night before Mohammed was abducted. The Israeli police did not pursue the incident. Protesting residents of Shuafat took out their anger on the Israeli light rail system that transports residents of Jewish settlements in East Jerusalem to West Jerusalem and passes through Shuafat.

The killing of Mohammed and the brutal police beating of his cousin Tariq, an American citizen, have overshadowed the original case of the abduction and killing of the three Israeli settlers. It seems that the Israeli government may have been premature in trying to pin the killings on Hamas and two Hebron-area individuals, Marwan Qawasmeh and Amer Abu Aisha, who have disappeared, given that a Palestinian man, who is not from either family, has been arrested in connection to the killing.

If the investigation proves to absolve Qawasmeh and Abu Aisha of responsibility, it will be a blow to Israeli credibility and to the credibility of those Israeli journalists, including Al-Monitor’s Shlomi Eldar, who jumped on the bandwagon of accusation against the Qawasmeh family. Israeli gag orders have proven to be highly political and lacking in security motivation. This was evident during the last two days, when Israel prevented the release of the name of a Jewish suspect who had confessed, although having possibly defamed Palestinian individuals without proof of its allegations.

The killings of the three Israelis and the Palestinian Jerusalemite have sparked a discussion about discrimination. Mohammed Abu Khdeir's father exposed an Israeli double standard when he asked if the government would destroy the homes of the Israeli suspects involved in his son’s murder. He said to the Los Angeles Times, "I am asking Bibi Netanyahu to do what he did in Hebron. Let's see what he does." Of course Abu Khdeir spoke rhetorically, knowing well that Israel would take no such action although the homes of the two Palestinian suspects, who might turn out to be innocent, were destroyed as collective punishment.

The brutal killing of young Israelis and Palestinians and the whipping up of nationalistic rhetoric has exposed the rawness of the ongoing conflict and the search for a way to address the underlying causes. The killings have triggered angry responses and attempts at revenge throughout Palestine and Israel. The attack on the Christian pastor near Ramallah is a sample of what is happening and what will continue to happen absent any real seriousness in tackling the big issues. Attempts by Israeli officials to calm the situation without owning up to their responsibility for it will not do. What is needed are sincere efforts to address the root causes of the conflict — the occupation and the settlement monster it created.