Israel's open opposition to the Palestinian reconciliation agreement is the driving force behind its offensive on the Gaza Strip. 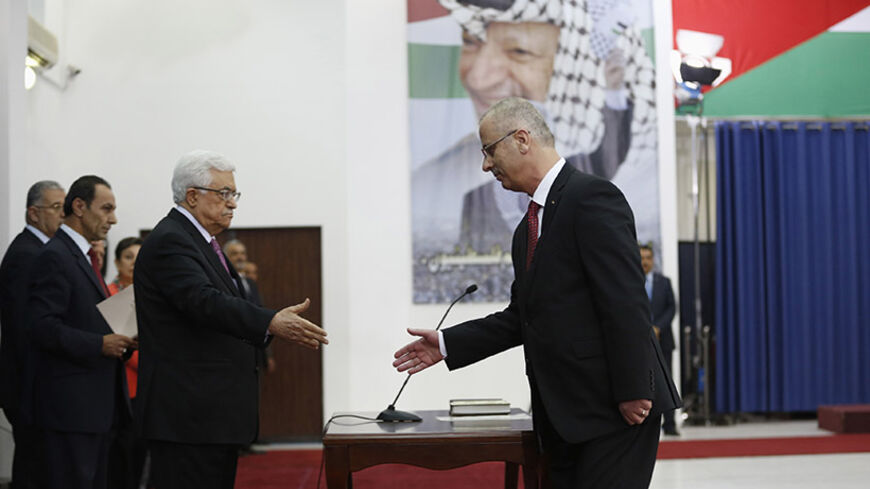 After his July 10 speech at the UN Security Council, Israel’s representative Ron Prosor said, “It’s time for the international community to right the wrong of the embrace between Hamas and Fatah. … Unity does not equal impunity.”

While Israel repeats that it is conducting a defensive war to stop the rocket attacks from the Gaza Strip, it has publicly declared its opposition to the Fatah-Hamas unity government. Ever since the agreement was announced, the Israelis have been attacking it as an act of legitimization for the Islamic movement. The new unity government includes no members of Hamas and the government’s program adheres to the conditions put forth by the Quartet following Hamas' victory in the 2006 Palestinian legislative elections.

Hamas' security control of the Gaza Strip has for some time been the Achilles' heel of the Palestinian negotiating team. Israel has often rhetorically asked the Ramallah-based negotiators whether they also speak for Palestinians in Gaza.

Palestinian President Mahmoud Abbas has been pushing for a reconciliation that will end up in new elections as the best way to cease Hamas rule in Gaza. When Hamas’ political leadership capitulated and accepted all the PLO’s conditions, the unity government was formed without any Hamas members. Israel felt that this gave a new life to the Islamic movement.

Ironically, opposition to the reconciliation agreement was not restricted to Israel. Hard-line Hamas leaders like Mahmoud Zahar, who has ties to the Izz ad-Din al-Qassam Brigades, was clearly not fully supportive. When the Ramallah leadership refused to pay the salaries of Hamas-appointed civil servants, the Hamas military supported workers' efforts to stop the banks from processing any salaries coming from Ramallah.

Israel seemed to believe that after the fall of President Mohammed Morsi in Egypt and Hamas' political bureau chief Khaled Meshaal left Damascus, Hamas was on its way down. It seemed to Israel that Abbas provided Hamas a lifeline by signing the reconciliation agreement with them.

The kidnapping and killing of three Israeli teens near Hebron was a perfect opportunity for Israel to create the kind of conditions required to carry out a major assault on Gaza and the Islamic movement. With no evidence to support the claim, Israel’s Prime Minister Benjamin Netanyahu accused Hamas of being behind the kidnapping, thus encouraging the Israeli propaganda machine to whip up public sentiment against the organization.

Although Israel was certain that the three Israelis had been almost immediately killed, a gag order was issued for political purposes and the public was incited specifically against Hamas. Israel used the accusation to round up Hamas activists in the West Bank, including elected members of the Legislative Council. Former prisoners who had been released during the Gilad Shalit exchange were also rounded up in violation of the Egyptian-sponsored deal. Specific targets in Gaza were shelled by the Israeli air force, still without any evidence of Hamas' involvement in the kidnapping and murder of the settler teens. After international pressure mounted, Israel declared that two Palestinians from Hebron who were active with Hamas and had gone missing were suspects in the kidnapping. No specific evidence was given, yet the Israelis demolished the homes of Marwan Qawasmeh and Amer Abu Aisha. Israelis also defamed one of Hebron’s leading families and sympathetic journalists were used to carry out a smear campaign against the Qawasmehs. Later, the Israeli authorities arrested a Palestinian who was not from either family. They showed no remorse for having blown up the homes of the two falsely accused Hebron families.

The Israeli military establishment and to a lesser degree the Hamas military wing have their own reasons to ramp up the conflict and test their latest military equipment. The war on Gaza is an unnecessary war. The calm from the previous cease-fire was holding until Netanyahu and company decided to piggyback on a heinous crime against three Israeli settlers. Their aim is to accomplish far-reaching political goals that include crushing a legitimate political movement.

Movements based on ideology, like Hamas, can’t be crushed by military power. Palestinians and Israelis have gone through endless cycles of violence and war to know that the only way out is a political solution that includes an end to the Israeli occupation. With no political horizon and little to lose, Palestinians will continue to resist Israel. The way to break the cycle of violence is at the negotiating table and not on the battlefield.