Hamas-Fatah reconciliation an opportunity for Israel

Israel should realize that, by virtue of Hamas' integration into PLO institutions, the group has tacitly come to terms with Israel's existence. 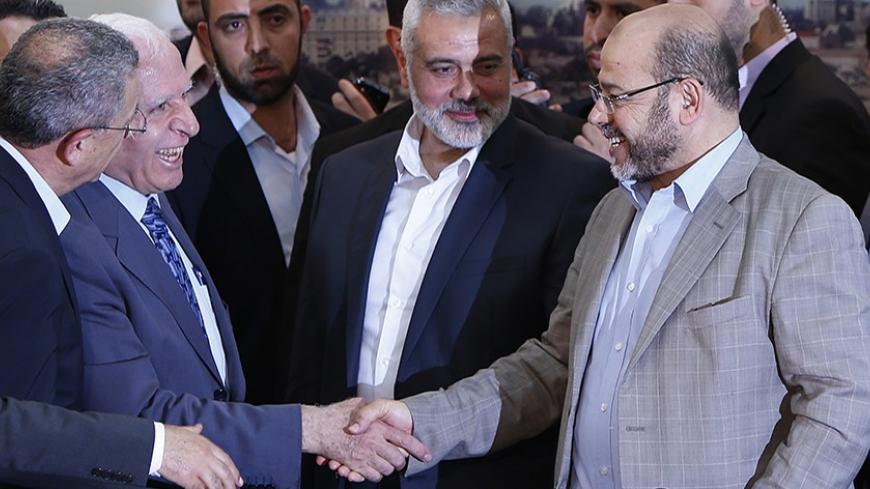 The reactions in Israel were livid. Shortly after the reconciliation agreement between Hamas and Fatah was announced on April 23, Avigdor Liberman, the Israeli foreign minister, declared this was the end of the negotiations. Benjamin Netanyahu, the Israeli prime minister, gave Mahmoud Abbas, the Palestinian president, two choices: either reconciliation with Hamas or negotiations with Israel. But the internal Palestinian reconciliation produces a golden opportunity for Israel to have the Gaza Strip return to the Palestinian Authority (PA) instead of perpetuating it as a fortified Hamas stronghold. It is therefore incumbent on Israel's leadership to thoroughly gauge the significance of the current reconciliation.

It was against the backdrop of the targeted killing of its leaders during the second intifada that Hamas started undergoing a change, namely shifting from a terrorist organization, whose main calling was jihad against Israel through suicide bombings, to a life-seeking political movement. Those military operations posed a threat to Hamas. If it continued dispatching suicide bombers to Israel, its existence would be in peril.

Hamas' preparations for the PA elections, which were held in January 2006, further precipitated the changes in the movement, as did its unexpected victory in those elections. Hamas representatives made up the Palestinian government that was headed by Ismail Haniyeh. All of a sudden, it found itself responsible for the fate of the Palestinians, including the residents of the Gaza Strip.

It goes without saying that responsibility also mandated discretion. Having always sought to foil the agreements between the PLO and Israel, the movement came to grasp the vast difference between ideology and reality. It was a tough dilemma. On the one hand, it wanted to lead jihad against Israel. On the other hand, it wanted to prove that it could rule and provide Palestinians with a normal, civil life.

Things did not always work out for the movement. It did not always weigh its course of action wisely and did not understand the limits of its power. Generally speaking, however, Hamas changed its spots, from a movement whose entire agenda was decided by its military arm — the Izz ad-Din al-Qassam Brigades — to a movement with a civilian outlook and a desire to show legitimate authority. It was for this reason that Hamas and Israel were able to reach cease-fire arrangements and hold an almost direct dialogue.

Yet for all of this, Israel's leadership continued to adhere to the narrative that was cemented when Hamas was founded in Gaza at the start of the first intifada in 1987. Over the years, Israel believed that the movement could be eradicated, yet found out each time anew that it was a mission impossible. Hamas was — and remains — deeply rooted in civil society. Not only has it not been eradicated by military means, but it has flourished and thrived, the climax of which was when Haniyeh became the first prime minister of the PA on behalf of Hamas in 2006. Overnight, the movement was given what it had always dreamt of since its foundation: legitimacy and proof that the PLO was not the exclusive representative of the Palestinian people.

But even when the change took place and Hamas turned into a political movement that shouldered responsibility for the residents in the territories, chiefly those in the Gaza Strip, Israel refused to recognize it. Even today there are still voices in Israel calling on bringing down Hamas' rule. But the movement — despite its distress in the wake of the fall of the Muslim Brotherhood in Egypt — will not vanish.

Israel should change its concept and take advantage of the return of the PA to Gaza. The Israeli narrative of eradicating Hamas should be replaced by compelling the movement to finish the process of change that began as soon as it felt it was in jeopardy. As noted, this happened after the assassination of its leaders. And it is also happening now as Gaza is being quarantined from all sides and Egypt is waging a ferocious war against it and its parent movement, the Muslim Brotherhood.

The reconciliation agreement with Fatah, if completed and implemented, will force Hamas to change. For instance, dismantling its security bodies, including Izz ad-Din al-Qassam Brigades, and having them incorporated in one military framework under the responsibility of the chair of the PA.

In recent months, Hamas has had trouble paying full salaries to its administration and security forces. Gaza's pressure cooker has long been simmering. Before blowing up in Hamas and Israel's face, it would be better if Abbas took over responsibility in cooperation with Hamas.

In the past, Israel demanded that Hamas accept the terms of the Quartet, including the recognition of Israel, the acceptance of the past agreements that were signed with the PA and the discontinuation of terrorism. Hamas will not declare that it recognizes Israel. According to its leaders' worldview, such a move is deemed religious heresy. That is why it will let Abbas and PA leaders oversee civilian and diplomatic matters vis-a-vis Israel. It will not fight the agreements that were signed and put into force, as it did in the past.

Furthermore, by virtue of being integrated into the institutions of the PLO, which signed the Oslo Accord with Israel, the movement tacitly recognizes the existence of Israel. Over the years, Hamas has come to the realization that Israel is a fait accompli. However, publicly acknowledging this would be tantamount to conceding failure of its way and its belief. And that's already asking too much.