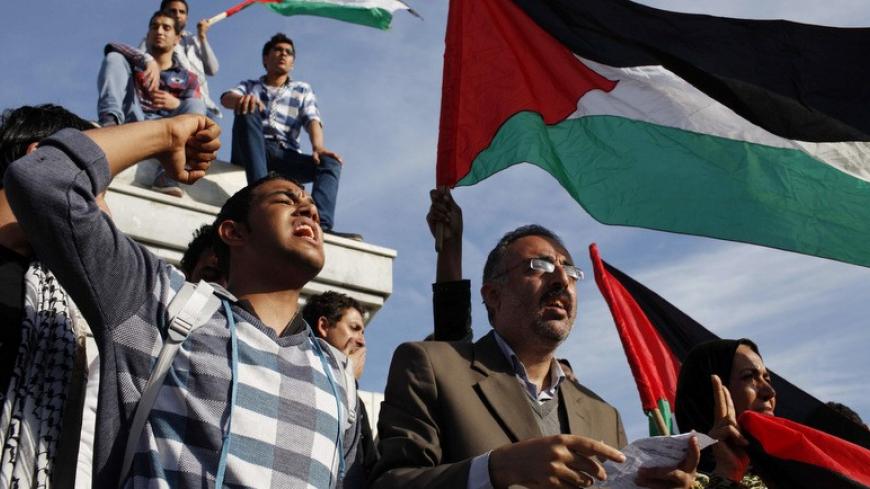 Palestinians wave national flags as they celebrate after an announcement of a reconciliation agreement in Gaza City, April 23, 2014. - REUTERS/Ibraheem Abu Mustafa

On April 23, Fatah and Hamas signed the Palestinian National Reconciliation Agreement, which implements two previous agreements signed in Doha (February 2012) and Cairo (May 2011).

The agreement calls for an interim government to be formed in five weeks consisting of political independents (aligned with neither Hamas not Fatah), followed by executive and legislative elections in six months.

PLO Chairman Mahmoud Abbas considers the unification of the Palestinian people in the West Bank and Gaza Strip as one of his legacy issues. Although Asmaa al-Ghoul reported that Gaza’s streets were mostly quiet after the announcement of the agreement, Abbas’ move is a boost to his sagging popularity and a likely mortal blow to any challenge from Mohammed Dahlan and other potential rivals if elections go ahead.

Abbas is playing the stronger hand relative to Hamas, whose domestic and foreign policies were in crisis, especially after Egyptian President Mohammed Morsi was deposed.

Adnan Abu Amer, who attended some of the reconciliation talks last week, reports: "A key interest for Hamas in the reconciliation deal is ending its crippling isolation, according to a Hamas leader who participated in the reconciliation efforts. He told Al-Monitor, 'The living conditions in Gaza have reached an unprecedented level of suffering, and there is no light at the end of the tunnel with regard to the deteriorating relationship with Egypt. This has sped up the reconciliation. [Hamas] is hoping that this reconciliation with Fatah will rekindle ties with Cairo, or at least put an end to the prevailing tension.'"

The May 2011 Cairo document stipulates that a “Higher Security Committee … will be formed by a decree of the Palestinian president and will consist of professional officers in consensus," although the fate of the Izz ad-Din al-Qassam Brigades has been deferred, as Abu Amer reported.

Daoud Kuttab suggests that, if the agreement holds, the answer may be a “Lebanon model” for the next Palestinian government:

Israel responded to the reconciliation agreement by suspending negotiations with the Palestinian Authority (PA), and US Rep. Ileana Ros-Lehtinen, R-Fla., chair of the House Foreign Affairs Subcommittee on the Middle East and North Africa, called for a halt to US aid to the PA, as Julian Pecquet reported. Abbas told Kerry on April 25 that "any government that is formed will be his government and represent his policies," implying it will recognize Israel and renounce violence, according to State Department spokeswoman Jen Psaki, who added that Kerry sees recent developments as “a moment of transition and part of the process.”

According to a fact sheet from the General Delegation of the PLO to the United States, "The April 23 agreement should have no impact on peace negotiations. The PLO will continue negotiating a peace agreement with Israel, supporting non-violence to end the occupation and upholding previous agreements signed with Israel. The interim government will adhere to those commitments and the PLO's political agenda."

Shlomi Eldar and Ben Caspit suggest that Israel should see the agreement as a potential opportunity, not a catastrophe. Eldar writes:

"In the past, Israel demanded that Hamas accept the terms of the Quartet, including the recognition of Israel, the acceptance of the past agreements that were signed with the PA and the discontinuation of terrorism. Hamas will not declare that it recognizes Israel. According to its leaders' worldview, such a move is deemed religious heresy. That is why it will let Abbas and PA leaders oversee civilian and diplomatic matters vis-a-vis Israel. It will not fight the agreements that were signed and put into force, as it did in the past.

"Furthermore, by virtue of being integrated into the institutions of the PLO, which signed the Oslo Accord with Israel, the movement tacitly recognizes the existence of Israel. Over the years, Hamas has come to the realization that Israel is a fait accompli. However, publicly acknowledging this would be tantamount to conceding failure of its way and its belief."

"Skepticism aside, one should not forget that this move should be given a chance. Is it perhaps possible that Hamas is forgoing terrorism and is actually entering the negotiation tent? Is it possible that Hamas will not form a direct part of a new government but will extend Abbas credit to continue the negotiations vis-a-vis Israel? Under certain circumstances, such a development could be deemed a positive response to the Quartet's three conditions (that Hamas recognize Israel, accept past agreements between Israel and the PLO and renounce armed struggle). If this is indeed the case, this portends a historic development. Will this be the case? History, statistics and logic suggest that it will not, yet hope should be allowed to flicker."

Neither Abbas nor Israeli Prime Minister Benjamin Netanyahu can count on much of a breather, even if their respective maneuvers play well with their constituencies, as Alon Pinkas warns.

Akiva Eldar draws attention to Jerusalem’s District Planning and Building Committee’s decision to allow a settler organization to build a seven-story building adjacent to the Old City, which could lead to its “Hebronization.”

"Putting up grandiose buildings in the eye of the storm, and populating East Jerusalem with Jewish rabbinical college students — all with full and official permission — are part of the city’s 'Hebronization.' Just as in the 'City Of the Patriarchs,' a government comes and a government goes, and settlers conquer another lot in an Arab neighborhood," writes Eldar.

Caspit writes that the Temple Mount has become the central fault line for an escalation of violence, if it is to happen:

"This time around, as well, the ingredients are securely packed inside the powder keg — bogged-down talks, clouds hovering over the 'diplomatic horizon' and growing tensions on Temple Mount. On April 20, two Israeli policemen and a few dozen Palestinians were wounded in the rioting that breaks out on the mount almost on a daily basis. Despite being ready and taut down to the last officer, the police are forced to bow their heads and allow hundreds of Muslim rioters, some of whom are Hamas militants, to close off the Temple Mount to Jewish worshipers. The parties are bickering over sovereignty, freedom of religion, status quo and what have you. When it blows up, if it does, we will all have forgotten the exact reason for it. Instead, we will start counting body bags."

Al-Monitor is pleased to announce the launch of its Arabic, Hebrew and Turkish newsletters to highlight our original reporting and analysis in those languages, as well as translations from articles from other Pulses.

The Arabic and Hebrew newsletters are sent Monday and Thursday, and the Turkish newsletter on Tuesday and Friday.