The conflict around the Temple Mount is increasing as Israeli-Palestinian peace talks might be on the verge of collapse. 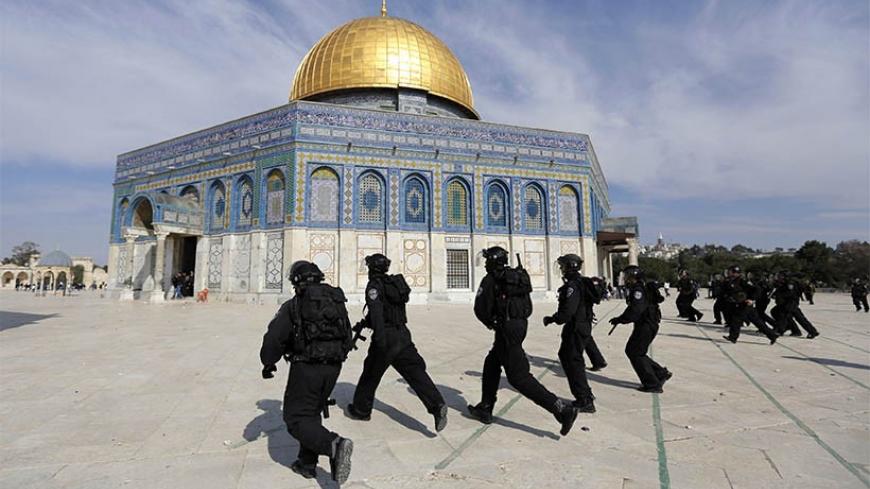 Israeli policemen run in front of the Dome of the Rock during clashes with stone-throwing Palestinians after Friday prayers on the compound known to Muslims as Noble Sanctuary and to Jews as Temple Mount in Jerusalem's Old City, Feb. 7, 2014. - REUTERS/Ammar Awad

Assessments of the situation as well as in-depth intelligence reviews by the Israel Defense Forces (IDF) regarding mounting tensions in the territories do not, for the time being, include warnings about a possible violent conflagration between the Palestinians and Israelis. For now, a third intifada is not featured among the working papers, forecasts or charts of plausible scenarios and expectations for the coming year. To extricate itself from its serious diplomatic and operational isolation and improve its standing among the Palestinian public, Hamas is trying to set the territories on fire. As a result, the number of terrorist attacks has risen steadily as has the number of disturbances.

The above notwithstanding, we are not talking about the orchestrated activity of organized cells, but more about what Israelis call “mood-based attacks.”

According to IDF and Shin Bet assessments, there is still no pent-up, popular energy just waiting for a volatile incident to turn it into a wave of violence. The Palestinian public has yet to forget the horrors of the previous intifada, which left some 4,000 Palestinians and more than 1,000 Israelis dead. Israel’s greatest fear is a “diplomatic intifada” — called here the “South African intifada” — which will be inflicted on it in UN institutions and accompanied by a series of international boycotts and anti-Israeli measures.

On the other hand, a well-known adage in the Israeli air force goes, “The one that will shoot you down is the one you can’t see.” With or without intelligence assessments, tension in the territories is growing. Clashes on the Temple Mount — pitting Palestinian youths, Hamas militants and Salafist activists against thousands of Jews, mostly right-wingers attempting day after day to get to the Temple Mount to exercise their freedom of religion — have reached a new peak during this year's Passover holiday in April.

Until about two years ago, events surrounding the Temple Mount were the exclusive domain of a few dozen, lone right-wing Israeli militants considered to be from the surreal, messianic margins of society. Following intensive daily activity, broad public campaigns and a number of Knesset members and politicians jumping on their bandwagon, thousands of right-wing Jewish activists, including key Knesset members, have been flocking to the Temple Mount in recent years. Going the extra mile in recent days is Miri Regev, chairman of the Knesset Internal Affairs Committee and a retired brigadier general who served as IDF spokeswoman. On April 20, she declared that if the Temple Mount is closed off to Jews, she will demand that it be closed off to Muslims as well. Although from a moral standpoint this appears to make sense, her statement is appalling at the practical level. The last thing Israel wants is to turn the Israeli-Palestinian conflict into a religious war.

Of late, the number of Israeli politicians not embarrassed to call the conflict a “war of religion” has been growing. By doing so, they cooperate with those on the Palestinian side who want to turn it into a religious conflict rather than a territorial-national dispute. The issue of the Temple Mount, which to date has not taken center stage in the conflict’s agenda, is paving its way into becoming a main topic on both the Israeli and Palestinian agendas. Dozens of organizations advocating the application of Israeli sovereignty on the mount as well as freedom of religion for Jews inside the compound have united under one umbrella. Daily issuing several reports to the media, they also bring dozens (and at times hundreds) of Israelis each day to the complex, where they are met by organized and ever-growing Palestinian violence on the one hand and conspicuous police incompetence on the other. The Temple Mount, the holiest site for Judaism, is also one of the holiest places for Islam. It's a powder keg waiting for a match. This is taking place as the talks between the Israelis and Palestinians are, at least for now, stymied.

It is into this mix that two weeks ago Naftali Bennett, chairman of the HaBayit HaYehudi Party and minister of economy and trade, introduced his Stability Initiative, which is what he calls his old diplomatic plan for partial annexation of the territories to Israel. Stability is the last thing that Bennett's plan will introduce to the region. When Prime Minister Benjamin Netanyahu’s current government was formed, Bennett declared that he would not be opposed to negotiations with the Palestinians, although he had no faith in the talks and despite being opposed to a Palestinian state. I will leave the government, he said, only when the negotiations come to the practical stage of evicting settlements. Bennett, however, is breaking his promise these days. Having threatened to blow up the coalition against the backdrop of the possible release of prisoners, he is now exploiting the dead-end and the breakdown in negotiations to promote his own diplomatic objectives.

Despite being a fledgling politician, Bennett has nonetheless accumulated a good deal of experience and confidence. Identifying a vacuum, he launched his plan accompanied by a catchy, captivating and sassy video clip in a typically high-tech fashion. Contending that there is no chance of obtaining a permanent status agreement between Israel and the Palestinians, the video also claims that the establishment of an independent Palestinian state between the Mediterranean Sea and the Jordan River would pose an existential threat to Israel. In light of this, Bennett proposes the annexation of lands to Israel.

The territories are divided into Areas A, B and C. The Palestinian Authority (PA) has security and civilian control in Area A. In Area B, it has civilian control but Israel is in charge of security. Area C is under full Israeli control. Bennett proposes that Israel apply its sovereignty in Area C, or in other words, annex it. According to Bennett in the video, Area C would incorporate all Jewish settlers in Judea and Samaria, about 350,000 people, and only 48,000 Palestinians. The remaining Palestinians would live in Areas A and B. Again, according to Bennett’s proposal, in the highly Palestinian-saturated Areas A and B, Palestinians would have full autonomy as well as transportation contiguity. They would be able to run their own affairs without Israeli external intervention. This will bring calm on the ground, allaying tensions and reducing friction between Israelis and Palestinians. All’s well that ends well.

As Bennett came out with his plan, the hectic talks between the Israeli team, headed by Tzipi Livni, and the Palestinian team, headed by Saeb Erekat, and brokered intensively by the Americans, continued. (Martin Indyk, former US ambassador to Israel and special US envoy, receives logistical, mental and creative support from the current US ambassador to Israel, Dan Shapiro.) The chances for a breakthrough to extend the negotiations until 2015 remained unclear. On April 10, Bennett gave Netanyahu an ultimatum to the effect that if Arab-Israeli prisoners were released within the framework of the deal with the Palestinians, he would leave the government. Without Bennett, Netanyahu has no coalition, but without the release of those prisoners, there is no deal with the Palestinians.

One of the creative ideas that has emerged proposes revoking these prisoners’ Israeli citizenship as soon as they are released, thus allowing Bennett to get off his high horse. Either way, the deadline for the deal is April 29. On this date, the nine-month period initially allotted for the negotiations will come to an end, at which point the parties will be in limbo. According to one account, unless a solution is reached by that date, the Americans will publicly announce that they are pulling the plug on their mediation efforts, leaving Israel and the Palestinians to wallow in their mutual pool of blood.

As far as Bennett is concerned, this is a once-in-a-lifetime, historic opportunity that must not be missed. The fact that PA President Mahmoud Abbas turned to the United Nations and signed petitions to join 15 treaties just hours before Israel was poised to approve the extension of the negotiations made Bennett jump out of his skin. This is our chance, he told Netanyahu and the other Cabinet ministers. We can win the blame game. The Palestinians are proving that they are not a partner. It's high time this farce ended. To complete the victory lap, Bennett immediately launched his diplomatic plan. Playing right into Bennett’s hands were PA members, who (as they invariably do) leaked to the media their intention to “return the keys,” abolish the PA and have Israel take charge of the Palestinian population in the territories. Bennett could not have expected a better reception than such a leak, which repeats itself with every new round of negotiations.

So what’s next? Everything hinges on next week. If the contacts produce an agreement, we all must hope that Netanyahu’s government survives it. An agreement to extend the negotiations could drag Netanyahu into calling an early election. If the talks blow up, the area might follow suit. The last time talks broke down, after Camp David in 2000, the then-chairman of the opposition, Ariel Sharon, visited the Temple Mount in October. It was that visit that blew up the region, subsequently taking the sky apart and raining the second intifada on us.

This time around, as well, the ingredients are securely packed inside the powder keg — bogged-down talks, clouds hovering over the “diplomatic horizon” and growing tensions on Temple Mount. On April 20, two Israeli policemen and a few dozen Palestinians were wounded in the rioting that breaks out on the mount almost on a daily basis. Despite being ready and taut down to the last officer, the police are forced to bow their heads and allow hundreds of Muslim rioters, some of whom are Hamas militants, to close off the Temple Mount to Jewish worshipers. The parties are bickering over sovereignty, freedom of religion, status quo and what have you. When it blows up, if it does, we will all have forgotten the exact reason for it. Instead, we will start counting body bags.