The third intifada is here

Preventing Jews from ascending Temple Mount seems to be the only solution to avoid further conflict in Jerusalem and the risk of another "Al-Aqsa intifada." 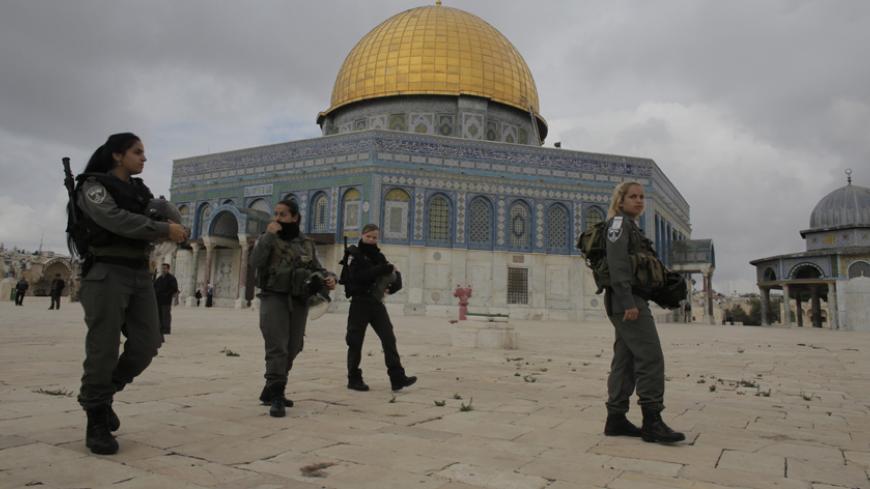 Israeli border police officers walk in front of the Dome of the Rock in the compound known to Muslims as Noble Sanctuary and to Jews as Temple Mount in Jerusalem's Old City, Nov. 5, 2014. - REUTERS/Ammar Awad

A third intifada. People have been talking about it for more than a year already, threatening that its eruption is just around the corner and that it’s likely to be more violent and hellish than its two predecessors.

Periodic situation evaluations of the Israel Defense Forces’ (IDF) highest command echelons warned that the harsh economic situation, lack of a diplomatic horizon and overall feeling of frustration and that there is no way out are likely to be the catalysts. Shin Bet assessments disseminated in 2013 even showed worrisome data regarding growing unrest in the West Bank, and painted the picture of the lone terrorist going out on his own to carry out an attack without the backing of organizational infrastructure. These assessments even led to closer security cooperation between Israel and the Palestinian Authority with the goal of detecting and thwarting the first signs of terrorist organization if and when they appear on the ground.

But apparently the Israeli security system didn't imagine that the third intifada it had anticipated, warned against and prepared for would erupt specifically in Jerusalem, and with such intensity.

The vehicular terror attack carried out on Nov. 5, and the one committed two weeks previously on Oct. 22 claimed the lives of three Israelis and wounded many others. When we add the attempted murder of right-wing activist Yehuda Glick on Oct. 30, one of the prominent members of the Temple Mount Faithful group, there is no room left for doubt: An additional ''Al-Aqsa intifada” (as the second intifada was named) is taking place now, and Jerusalem is both the battlefield as well as the cause of the unrest. Or, to be more precise: the Temple Mount is the catalyst for the eruption of the current intifada in Jerusalem. We can deduct this from the words of relatives of two terrorists who carried out the recent vehicular terror attacks in the city.

Family members and neighbors of Abed a-Rahman a-Shaludi from Silwan, who rammed his vehicle into the train station, killing the infant Chaya Zisel Braun and Karen Yemima Muskara, told reporters who arrived in the neighborhood on Oct. 23 that nothing would pacify the crowd as long as Jews ascended to the Temple Mount.

The 16-year-old son of Ibrahim al-Aqari, the terrorist who committed the vehicular attack this week in which border police officer Jidan Assad was killed, made comments in a similar vein. “When I got home, I heard about the attack and I was very happy. What is happening at the Al-Aqsa Mosque is something that no one should accept.”

Aqari’s wife described her husband’s motive for going on a killing spree. “From the morning hours he kept close watch on what was happening at Al-Aqsa. He saw the blood, the wounded, the desecration and everything that was going on. He quickly left the house and went to the place of the attack to earn a place for himself among the shahids [martyrs] and heroes.”

In September 2000, then-opposition head Knesset member Ariel Sharon ascended to the Temple Mount, accompanied by Likud Knesset members. The visit was during a trying and tense time period — after the failure of the Camp David talks. It was viewed at the time as provocative and inflammatory, and indeed it lit a fire. Then, too, the argument was heard regarding the right of Jews to ascend the Temple Mount and pray, but the end of the story is well known: The day after the emotionally charged visit on Sept. 29, 2000, in the course of the Friday prayers, rioting broke out on the Temple Mount. Seven Palestinians were killed by border police forces and the police, and the conflagration spread rapidly throughout the West Bank. The second intifada had begun.

The second intifada could have maybe been halted at the very beginning, but the IDF, carrying out orders from the political echelons, chose to strike back with a strong hand instead of trying to calm the territory while understanding the destructive results of a conflict with the Palestinian population. According to a 2002 investigative report published at the time by my colleague Ben Caspit in the Israeli daily Maariv, the IDF fired about a million bullets in the first days of the intifada.

Fourteen years have passed since then. In light of the lessons learned from the second intifada, Israel must decide which direction to take. Is Israel interested in an armed confrontation with the Palestinians, one that no one knows when and how it will end?

Perhaps in the past understandings could have been reached with the Palestinians to allow Jewish groups to ascend to the Temple Mount and pray. But that was not accomplished. Solutions were not obtained, not even in the course of peace talks between the Israelis and Palestinians, talks that have collapsed in the meantime.

What was not accomplished in the past through dialogue and understandings cannot, so it seems, be created now, when the earth in Jerusalem is burning under our feet and there is concern that a “second Al-Aqsa intifada” may well spill over into the West Bank. At that point, no security coordination will be able to stop it. Apparently, there is only one way to try to halt the downward spiral, before we again use a million bullets and transform the bus stations in the capital city into shelters: to close the Temple Mount to Jews.

On the advice of Internal Security Minister Yitzhak Aharonovitch and the Jerusalem police, it was decided to place concrete railings around bus stations and underground train stations to protect pedestrians. While these may give some local protection to travelers, they ostensibly won’t be able to stop assailants from among the residents of East Jerusalem who believe that they are engaged in a religious war.