How outlawing the Islamic Movement could backfire on Israel

The decision to outlaw the northern branch of the Islamic Movement in Israel might actually strengthen its status among Palestinians there. 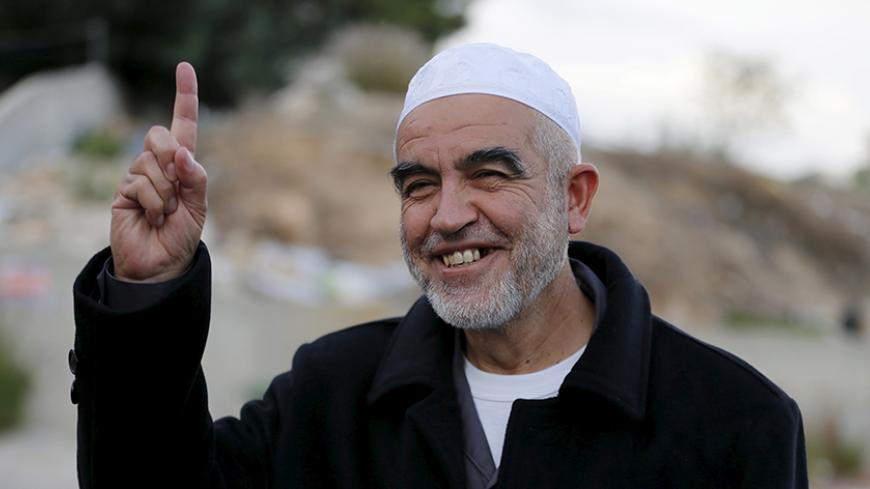 Sheikh Raed Salah, leader of the Islamic Movement's northern branch in Israel, poses for a photo after the Israeli government outlawed the group, in Nazareth, Nov. 17, 2015. - REUTERS/Ammar Awad

Following months of consultations, checks and assessments, Israel's diplomatic-security Cabinet decided on Nov. 17 to outlaw the northern branch of the Islamic Movement in Israel. This means any activity affiliated with this organization will be a criminal offense and could entail a prison sentence. Shortly after the announcement, the Shin Bet froze the bank accounts of nonprofit associations affiliated with the movement. Property was impounded, and cease-and-desist notices were issued to 17 foundations and nonprofit organizations operating in the north (Nazareth and Umm al-Fahm), in the south (the Bedouin town of Rahat) and Jaffa.

Prime Minister Benjamin Netanyahu has tried for nearly two years to outlaw the organization, but his efforts were bogged down mainly by objections from the Justice Ministry, when it was headed by Tzipi Livni. The ministry held that the move could not be defended before the Supreme Court. In May 2014, an interministerial team was established to come up with a solution, but Operation Protective Edge, the general elections and concern over deepening the rift between the Israeli establishment and Palestinians in Israel delayed the decision.

Convening a press conference on Oct. 8, just when the current wave of violence broke out, Netanyahu singled out the Islamic Movement's northern branch and its leader Sheikh Raed Salah as the main agitators in relation to the Temple Mount. “We are in the midst of a wave of terrorism with knives, firebombs, rocks and even live fire,” Netanyahu said. “While these acts are mostly unorganized, they are all the result of wild and mendacious incitement by Hamas, the Palestinian Authority, several countries in the region and — no less and frequently much more — the Islamic Movement in Israel, which is igniting the ground with lies regarding our policy on the Temple Mount.”

In recent weeks, the move to outlaw the movement picked up momentum thanks to the work carried out by Public Security Minister Gilad Erdan as well as senior police and Shin Bet officials and the Justice Ministry under Ayelet Shaked. During the deliberations, it became apparent that Shin Bet Director Yoram Cohen was opposed to outlawing the Islamic Movement, arguing that his organization had no information that directly links the movement to terrorist activity. Cohen further told the ministers that the northern branch consisted of more than 10,000 followers and that it would be impractical and unwise to have all of them declared felons overnight. According to him, the move would embolden the organization, causing more damage than good. The Israel Defense Forces also apparently could not come up with any proof of a close link between the Islamic Movement and terrorism.

Incitement, however, is a whole new ball game. Ever since the Islamic Movement splintered into two branches in 1996 — the northern branch under Salah’s leadership and a southern one — Salah has instigated incitement and provoked unrest at the Temple Mount. In 2010, he took part in the Mavi Marmara flotilla that sailed from Turkey to the Gaza Strip in a bid to break the Israeli blockade on Gaza.

In September 2000, Salah’s name came up in connection with the incitement and unrest in the wake of the visit by then-opposition leader Ariel Sharon to the Temple Mount, which subsequently led to riots at the compound and the outbreak of the second intifada. The Or Commission — a commission of inquiry tasked with reviewing the violent clashes between Israel’s security forces and the Arab-Israeli public — unequivocally determined, based on evidence, that Salah’s call to “defend the Mount” contributed to the flare-up and violent outburst.

Since then, Salah and his movement have continuously accused Israel of causing harm and defiling Al-Aqsa Mosque. In 2007, for example, during a sermon he delivered not far from the Old City in Jerusalem, Salah told his disciples, “The most beautiful moments in our destiny is when we face Allah as martyrs inside Al-Aqsa Mosque.” As soon as the sermon was over, riots erupted between the worshipers and police forces, leading to the injury of three police officers. In the wake of the sermon, he was charged with incitement to violence and racism. He was convicted and will be sent to prison probably at the end of the month. Last month, following an appeal to overturn his conviction that the court denied, Salah told reporters, “I will go to prison on behalf of Jerusalem and the blessed Al-Aqsa. The bombs and the bullets that you fire at us in Al-Aqsa will not intimidate us. In spirit and in blood we shall redeem Al-Aqsa. I say to the occupation: We love life, but if we have to, we will die for Al-Aqsa.”

Several of his supporters told Al-Monitor on condition of anonymity that Salah truly believes that Israel plans to introduce major changes to the Temple Mount and appropriate large sections of the compound. According to them, Salah is motivated solely by his religious faith and nothing else.

There is no doubt that Salah has been at the forefront of an unrelenting struggle concerning the Temple Mount and that in many cases his statements were inflammatory. “Al-Aqsa is in danger” is his motto, which has swept up thousands of Palestinians in Israel as well as Palestinians from the territories. Salah also masterminded the establishment of the Mourabitoun and Mourabitat at the Temple Mount, both funded by the Islamic Movement.

The question remains whether these facts are enough to outlaw this movement, which, as noted, has some 10,000 followers. The law stipulates the punishment for incitement, and Salah is going to jail for that. When there is no proof that activists are engaged in an illegal activity — including, of course, the planning or promotion of terror attacks — outlawing a religious movement is a problematic measure. Israel has been trying to identify the incendiary centers that triggered the recent wave of violence, and as far as Netanyahu is concerned, incitement by the Islamic Movement and the Palestinian Authority is the culprit.

But there is more to the causes of the recent wave of terror than just incitement. At a Cabinet meeting earlier this month, Director of Military Intelligence Maj. Gen. Herzi Halevi told the ministers that frustration and despair on top of incitement in social media are what drives young Palestinians to carry out terror attacks.

But Israel’s political establishment only hears what it wants to hear, taking the easy way out and finding justifications to outlaw a branch of the Islamic Movement when in fact it could have tried its leaders, should they be found to be involved in incitement or terror. As noted, the court decided to sentence Salah to 11 months in prison for incitement, whereas the movement’s other supporters, who have been careful to weigh every step they make knowing that any slip-up could send them to jail, may now feel they have nothing more to lose.

The main downside of this measure is that the Arab-Israeli public, now that the movement and its doctrines are anathema, might perceive it as a victim, and as a result the movement may actually gain strength. If so, the rift between Palestinians in Israel and the Israeli establishment at large might only grow bigger.