Does Bibi know more than the Israeli intelligence service?

Despite recommendations by the Shin Bet to outlaw the Muslim Brotherhood, the Netanyahu government decided instead to side with the police and outlaw the northern branch of the Islamic Movement. 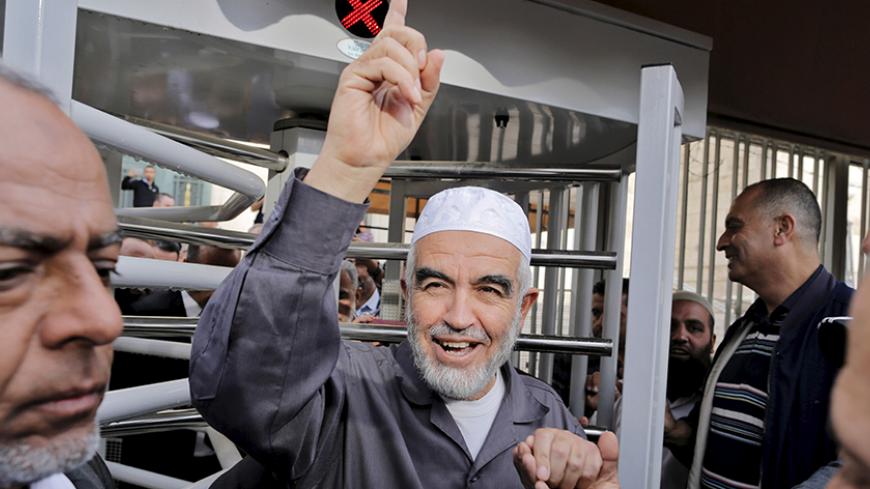 Leader of the northern Islamic Movement Sheikh Raed Salah gestures as he leaves the district court in Jerusalem, Oct. 27, 2015. Israel outlawed the Islamist group that officials claim has played a central role in stirring up violence over a Jerusalem holy site in a wave of bloodshed that began two months ago. - REUTERS/Ammar Awad

About two weeks ago, the Israeli Cabinet had already decided to outlaw the northern branch of the Islamic Movement in Israel, but the decision was kept secret. Prime Minister Benjamin Netanyahu looked for a convenient time to publicize the decision that would turn some 10,000 Islamic Movement members, Israeli citizens, into lawbreakers. The terror attack in Paris on Nov. 13 presented him with the ideal opportunity to do so. Now, when France and all of Europe are on high alert due to extreme Islamic terror, Israel demonstrates how to fight subversive Islamic elements located inside the state and exemplifies the “defensive democracy” concept.

Not everyone supported this decision. The Shin Bet has opposed this step for more than 15 years, not out of love for extreme Islam but out of pragmatic considerations. The charisma of Sheikh Raed Salah, also called “Al-Aqsa sheikh,” has been dissipating in recent years. The sheikh, who heads the northern branch of the Islamic Movement in Israel, is viewed as the one fanning the flames of incitement regarding the Temple Mount and the one who funds the Mourabitoun and Mourabitat (Palestinian activists — men and women — operating on the Temple Mount compound) that were outlawed Sept. 9. Recent years have seen a decline in the number of attendees at the Islamic Movement’s annual rally. Arab-Israeli youth are not attracted to this organization in large numbers, and the Shin Bet feels that outlawing the movement may arouse antagonism among Palestinians in Israel and make it more difficult to track the radical elements within extreme Islam in Israel.

In contrast to the Shin Bet, Public Security Minister Gilad Erdan presented the opinion of the Israeli Police, backed up by classified intelligence reports. The police supported this step enthusiastically, despite the concern that it would only cause the movement to go underground. Such a setup could actually create a buzz that would only make the movement more attractive and push it into an accelerated Islamic State-like transformation process. The police feel that any agitation arising among Israeli Arabs will be insignificant and containable, while the legal tools given to the authorities to neutralize incitement and extreme Islam in Israel will be substantial.

Also, the view that outlawing the movement will transform the Islamic Movement into a romantic solution for embittered young Muslim radicals was not viewed as a serious threat. We’ll be able to deal with these phenomena, said police officials, and convinced the Cabinet. “At the end of the day,” a senior Cabinet minister told Al-Monitor on condition of anonymity, “we drew a straight line between the Islamic Movement’s activities and incitement campaign regarding the Temple Mount, with the harsh, violent incidents that erupted on the Temple Mount and its environs. The moment that such a direct connection is a proven fact, we have to make a decision — and that is exactly what we did.”

The Cabinet was presented with a “genealogical tree” of the dissemination of incitement and terror in the region. This tree shows the Muslim Brotherhood as the parent organization, under which Hamas in Gaza and the northern Islamic Movement faction in Israel share the same source of authority, the same ideology and the same funding channels. The Israeli Islamic Movement’s accounts contain more than 100 million shekels (some $25 million), an enormous sum when you take into account the fact that the movement is supposed to deal only with charity and benevolence work, without any political involvement.

The Cabinet decided not to accept the recommendation regarding the Muslim Brotherhood. This was due to the concern that such a step could harm what remains of Israel’s tattered relations with Turkey, since Turkish President Recep Tayyip Erdogan’s ruling party is a member of the Islamic Brotherhood organization. The same might be true even of relations with Jordan, in which the Muslim Brotherhood movement is also very active.

It is amazing to discover that it took Israel 15 years to finally outlaw the movement. The justification for such a step existed as far back as the Or Commission recommendations, in which High Court Justice Theodore Or examined the events that led to the eruption of riots in October 2000, and then to the second intifada. In a special chapter devoted to the Islamic Movement's northern branch and its leader Sheikh Salah, the committee found a clear correlation between the incitement conducted by the movement’s leaders, with the eruption of the riots. The chapter also brings examples of the movement’s radical ideology, according to which the Western Wall in Jerusalem is also part of Al-Aqsa Mosque, and therefore the presence of Jews there is also viewed as an act of violence that justifies “even more severe” Islamic violence in response, in their words.

The Or Commission recommendations include harsh quotes from the speeches of Salah and his associates, who call on Muslims to sacrifice their lives on behalf of the restoration of the “stolen homeland.” In the speeches, they enumerate cities and towns in Israel as part of that same homeland, and describe Israel as “a stupid and treacherous monkey from which the land must be cleansed.”

Despite all this, Israel has contained the Islamic Movement for a decade and a half, until the recent decision.

Nevertheless, there are no intentions to arrest all the members of the movement or shut down all its institutions. It was decided, on the recommendation of the Shin Bet, to act pragmatically and only take steps against the inciters and leaders. However, the institutions, nongovernmental organizations and foundations will only be closed down if it is proved that they disseminate incitement. Israel hopes that the outlawing of the movement will neutralize it and lead to the waning of its power, though quite a few security sources take into account the possibility of the opposite result.

One way or the other, Israel has no intentions of continuing to tolerate the riotous incitement campaigns carried out in mosques within the State of Israel. “Sisi closed down thousands of Muslim Brotherhood mosques because he understood that those were hotbeds of violence,” a high-placed security source told Al-Monitor this week on condition of anonymity. “We also understand this, though the tools at our disposal are limited in light of the fact that we operate within a democratic government and need judicial authorization [for our actions]. At some point, I hope that in Europe they will also understand that [fact]."

This week, French President Francois Hollande announced that each institute or place where terror is praised, will be closed, including mosques — thus proving that even in Europe they are starting to understand this reality. ​