Even Menachem Begin did not support annexation of West Bank lands. 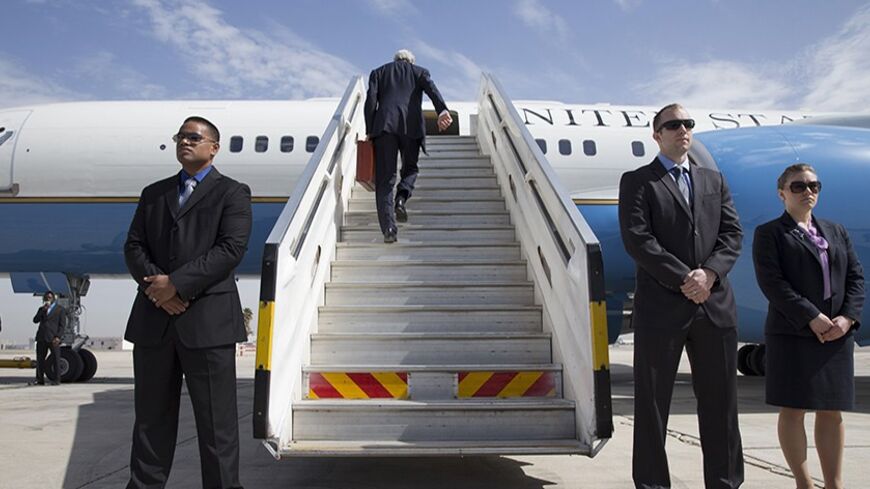 US Secretary of State John Kerry climbs up the stairs of the plane to leave Tel Aviv, April 1, 2014. - REUTERS/Jacquelyn Martin

Diplomacy is a binary endeavor. Either you succeed … or you fail. Even if discussions continue beyond the April 30 target date, when measured against the standard US Secretary of State John Kerry set when he embarked on his now grievously wounded diplomatic effort last July — a final status agreement in nine months — failure is the only honest verdict.

Whatever positive energy the Oslo process unleashed was dissipated long ago. In the late 1990s, I hosted quiet discussions between a prominent leader of the settlement movement and a top Yasser Arafat confidant. Both talked easily about the prospect of two states. My settler friend even commented positively and graciously on his opposite’s qualifications to be Palestine’s first president.

No longer. Rather than consider how to establish a Palestinian state in the wake of the undistinguished US diplomatic effort this last year, the center of gravity in Israel is turning on the question of how much of the West Bank it should annex — a step even Menachem Begin himself explicitly rejected.

Today’s conversation in Israel is being led by Begin’s heirs — right-wing politicians who, emboldened by the current state of affairs, see political value in promoting the expansion of Israeli sovereignty, not its delimitation — a clear, immediate and damaging consequence of Washington’s failed effort.

But failure comes in many colors.

Even today — after the canceled prisoner release, the new settlement declaration, the tentative turn to UN organizations and the yelling and screaming — neither Prime Minister Benjamin Netanyahu nor Palestine Liberation Organization (PLO) Chairman Mahmoud Abbas wants to walk away from the table. An agreement to release prisoners, freeze the PLO’s UN campaign and keep negotiating about negotiations will be described as a victory, however pale.

It is a fair bet that President Barack Obama's administration has not devoted much attention to the costs and consequences of a process that has gone “poof.” Indeed, Kerry’s overworked staff barely has enough hours in the day to labor in support of the negotiations’ success. Failure has simply not been an option, and its consequences have yet to be factored into the diplomatic equation.

But the downside risk is an ever-present reality, and those who ignore it will pay in the end for their negligence, one way or the other.

Both the PLO and the Netanyahu government are picking at the all-but-lifeless corpse of the Kerry effort, each seeking advantage at the other’s — and Washington’s — expense. Abbas’ offensive on the international plane is one example, Netanyahu’s effort to bring Jonathan Pollard into the mix and pocket American concessions on security and settlements is another.

No matter what happens on the negotiating front, a new era in the long history of the conflict has been opened in the wake of the American diplomatic campaign. Washington is said to be re-evaluating its next steps, although the meeting on April 8 between Kerry and the president has yet to produce any news on this front.

In any case, neither Abbas nor Netanyahu is waiting for Washington. No matter Kerry’s success in resurrecting his formula of negotiating about negotiations, new rules of the game are being formulated by the players themselves. The intent is not to build mutual confidence, but the opposite — to win advantage at the other’s expense, at the UN, in Abbas’ case, or on the West Bank itself, in Netanyahu’s.

Most attention has been paid to Abbas’ turn to international organizations to establish the PLO as sovereign representative of the state of Palestine. The PLO’s effort until now bears the signs of a successful, measured escalation — an unusual achievement for Palestinian diplomacy. Abbas’ action has moved the PLO's campaign a step forward without precipitating a total collapse in Kerry’s effort or sparking significant official countermeasures by Israel.

But while the PLO’s initiative has received prominent coverage, it stands to be one of the least consequential consequences of the implosion of the Kerry program.

Washington may be out of ideas. It may not have a plan B, but others do. Every day in the West Bank and Gaza there are incidents that have the potential to upend all the calculations of manicured diplomats. A provocation on the Haram al-Sharif (Temple Mount) — where two members of Congress recently visited in the company of an advocate for building the Third Temple on the ruins of Al-Aqsa Mosque — or a deadly incident at a checkpoint or in an olive grove could well force Israel out of its current complacency about the costs of continuing the stalemate.

Israel has succeeded for almost half a century in defying Palestinian and international demands for a reduction in its stranglehold on the West Bank. It remains the much stronger player, with far greater influence on the day-to-day conduct of occupation and settlement, and a long history of decisions intended to revitalize its hold on the West Bank and East Jerusalem. Unless the PLO’s effort produces a dramatic change in this unequal equation, the most far-reaching decisions about what course to take will be made in Israel.

The most prominent voice in this growing chorus is Naftali Bennett, leader of the HaBayit HaYehudi Party and a potential challenger to Netanyahu’s leadership.

"[Netanyahu] made a historic and strategic mistake with his declarations on a Palestinian state, and now we find ourselves in this hole," Bennett said April 10.

"If the pressure from Likud-Beitenu and Bayit Yehudi works out, it will be possible to move ahead and tell the nation that we are taking action. … There is an overwhelming majority of Knesset members and ministers in favor of annexing the settlement blocs," he said. "Hold a referendum and you will see the results. The time has come [for Israel] to initiate. We are constantly on the defensive, and we should outline Israeli interests and implement Israeli sovereignty over the [settlement] blocs."

The shortcomings of Kerry’s effort are being used as a political springboard in a campaign for Israel to unilaterally lay permanent claim to the West Bank. “Settlement blocs” have become part of the diplomatic narrative, but their concrete dimensions are intentionally vague. Bennett suggests that as a first step, Israel annex areas of the West Bank (Israel unilaterally expanded its laws and jurisdiction over East Jerusalem in June 1967) where approximately 300,000 of the current settler population of more than 350,000 reside. Palestinians living in these areas will be offered Israeli citizenship. The expansion of Israeli sovereignty over the remainder of settlements and settlers is Bennett’s “ultimate goal.” But this step will come later, when Israel extends its jurisdiction to all of Area C, comprising 60% of the West Bank and where settlement has created a Jewish majority. What remains — Areas A and B — where the Palestinian Authority nominally rules, and almost 3 million Palestinians live — will be forced upon Jordan or have an ersatz sovereignty imposed on it.

“The whole land of Israel,” Bennett has declared, “is a single bloc. There are those who say we can build inside the settlement blocs and others who say we may not be able to hold onto the towns outside the blocs. I have come to tell you what the Arabs already know — that the land of Israel is one [settlement] bloc.”

Not quite the legacy Washington intended to bequeath.