If reports are accurate, PLO Chairman Mahmoud Abbas agreed to allow 80% of settlers to remain in settlements annexed to Israel, a historic reversal of previous PLO positions. 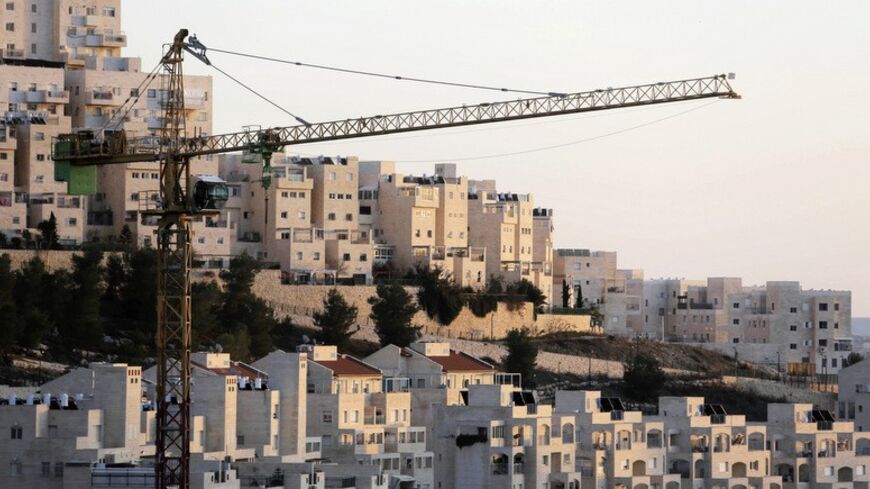 A crane is seen next to homes in a Jewish settlement near Jerusalem known to Israelis as Har Homa and to Palestinians as Jabal Abu Ghneim, Jan. 3, 2014. - REUTERS/Ammar Awad

Peace-making between Israel and the Palestinians has ended. In its place, the battle to explain or rationalize failure has begun.

Benjamin Netanyahu and Mahmoud Abbas trade accusations. Both blame the Americans. Washington takes an evenhanded approach. It sees culprits everywhere … except in the mirror.

All but lost in this noise is real news that many seem to have missed.

An unnamed US official, widely assumed to be lead US negotiator Martin Indyk, told Israeli journalist Nahum Barnea that PLO Chairman Mahmoud Abbas “agreed to the border outline so 80% of settlers would continue living in Israeli territory.”

In the rarified world of diplomatic code in which much of the official Israeli-Palestine dialogue is conducted, a Palestinian agreement to permit 80% of settlers to remain in settlements that would be annexed to Israel is a bombshell, marking a historic reversal of the PLO’s negotiating demands.

The only map that can be drawn according to that measure must include Israel’s annexation of at least 3% of the West Bank, and perhaps far more. This map would include the settlers and settlements of Maale Adumim, Givat Zeev, Har Homa and perhaps even Ariel — all of which the PLO has adamantly refused to formally surrender, at Camp David in 2000, at Annapolis in 2008, until now.

Inclusion of these major settlements, each anchoring an even larger and more populous expanse of “settlement blocs” throughout the West Bank, has long been a non-negotiable Israeli demand. At Camp David, Ehud Barak demanded Palestinians agree to a map enabling Israel to annex 95% of its settlers and almost 20% of the West Bank. The “napkin map” presented by Ehud Olmert to Abbas (who sketched the outline on a napkin) in September 2008 marked out Israel’s demand to annex almost 8% of the West Bank, including 87% of all settlers.

Abu Mazen acknowledged this exchange in a televised April 26 speech.

“Mr. Olmert,” charged Abbas, “did not refuse to discuss final stage issues the way his successor is refusing: the borders, Jerusalem, refugees, security and settlements. There was an exchange of maps, percentages and other things. This means that there was total seriousness about reaching a solution …”

While the PLO has consistently rejected the maps presented at Camp David and Annapolis, the PLO position has long acknowledged considerable concessions to Israel’s demands to retain large numbers of settlers and their settlements and annex them to Israel. During the Annapolis talks, the map presented by Abbas would enable Israel to annex almost 2% of the West Bank, including approximately 60% of the 1.5 million settlers living across the June 4, 1967 line. The settlements Abbas is prepared to surrender include all those established by Israel since 1967 in East Jerusalem, recently described by Abbas as Palestine’s “jewel in the crown,” with the prominent exception of Har Homa abutting Bethlehem.

Har Homa (population 10,000) was established by Netanyahu almost 20 years ago. Palestinians have also refused to surrender Maale Adumim, with a population of 40,000 that cuts the West Bank heartland in two, Givat Zeev (population 14,000), south of Ramallah, and Ariel (population 20,000), at the end of a salient reaching almost 20 kilometers (12 miles) into the West Bank east of Tel Aviv.

When talks began last summer, the PLO put its 2% map on the table. Netanyahu refused to even table a map outlining the breath of Israel’s appetite for the West Bank.

The US view supporting the Olmert demand for annexation of approximately 85% of settlers was inartfully noted at the outset of the talks by US Secretary of State John Kerry himself. Yedioth Ahronoth reported on Aug. 1, 2013, “According to one congressman, Kerry said he believed 85% of Israel's biggest settlement blocs will remain under Israeli sovereignty.”

Indyk’s revelations offer the first and most authoritative indication that the PLO position has moved so clearly in Washington’s — and Israel’s — direction. In a speech to the Washington Institute for Near East Policy, Indyk, amplifying his earlier unsourced remarks, said, “Just during the past nine months of negotiations, tenders for building 4,800 units were announced and planning was advanced for another 8,000 units. It’s true that most of the tendered units are slated to be built in areas that even Palestinian maps in the past have indicated would be part of Israel.”

It is no secret that Israel, during the course of negotiations, has continued to build and expand settlements everywhere throughout East Jerusalem and the West Bank, where the population now reaches 550,000. But if Indyk’s claim — now public and explicit — is true, Kerry has succeeded in winning Abbas’ formal support for Israel’s annexation of an expanded list of settlements and the vast majority of settlers residing in the very locations that Abbas has long refused to include.

One usually well-informed Palestinian source was equivocal in his response to Indyk’s comments. “I don’t know. I am not sure,” he commented. A top Palestinian official, however, was adamant, “There is no such agreement like that. It is simply not true.”

Washington’s disputed claim may simply be part of the effort by all parties to the diplomatic fiasco to cast responsibility for failure on anyone but themselves. Yet, one cannot escape a more sobering and lasting conclusion — that the US-led negotiating process continues to increase the burden of territorial concessions on an ever-shrinking Palestine.