Israeli-Palestinian peace talks not dead yet 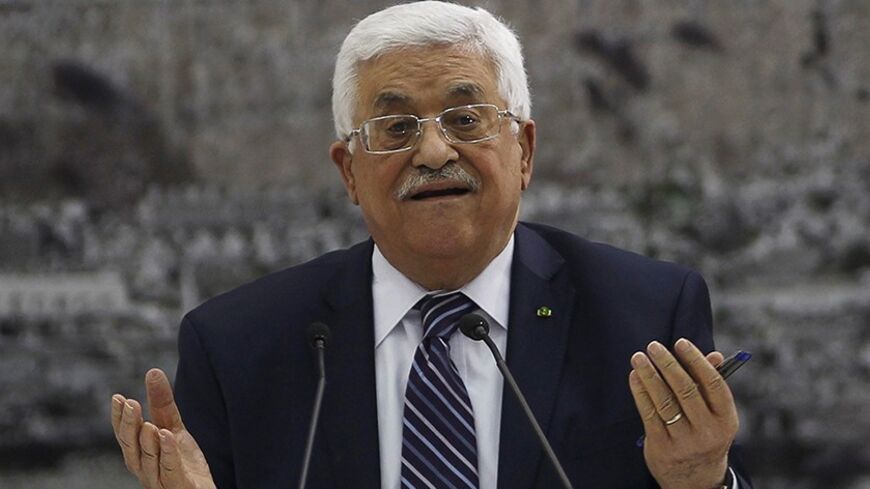 When US officials declare that Washington cannot want peace more than Israelis and Palestinians themselves, it’s a clear signal that the game is over — time to turn off the lights and hope for the best.

Hillary Clinton and George Mitchell were the last in a long line of US officials to invoke this assessment as a means to rationalize their failure to bring an end to Israel’s occupation and enable the establishment of a Palestinian state at peace with Israel.

Despite the current crisis atmosphere, we are not there … yet. This is no thanks to Palestine Liberation Organization (PLO) Chairman Mahmoud Abbas (Abu Mazen) and Israeli Prime Minister Benjamin Netanyahu, whose commitment these last nine months appears to be limited to accommodate US Secretary of State John Kerry just enough so as not to be blamed for his failure.

Even this intention, adopted by each in a zero-sum effort to escape Washington’s wrath, appears to have weakened in the escalating crisis precipitated by Netanyahu's decision to postpone release of the last batch of Palestinian prisoners agreed upon with Kerry last July. Abu Mazen's refusal to agree to continue discussions beyond April and his subsequent moves in the direction of the UN despite commitments to the contrary have added to Kerry’s mounting pile of troubles.

Judged solely by the time and effort Kerry has invested, we should have already been at the finish line, champagne corks a-popping. The experience of the last year offers a far different and more depressing story. At every turn, Kerry’s efforts to move the process out of the starting gate have been frustrated. The bilateral dialogue “facilitated” by Kerry appointee Martin Indyk was all but stillborn. Kerry next hit upon a US effort to address Israel’s security requirements in the Jordan Valley, thinking that once his experts completed their plan to make Israel secure on the eastern front in the context of peace, Kerry could move the parties to a discussion on borders. This intention too was frustrated.

Late last year, a framework agreement became the new diplomatic flavor of the month. When that proved beyond Kerry’s reach, the bar was lowered. The new goal was simply a framework for negotiations. The United States and Iran worked out a more comprehensive but similar document in a few businesslike sessions. On the Palestine-Israel front, however, it has been like herding cats — each wanting to go his own way with little concern for the other.

In recent weeks, the target of US efforts has become more modest still — a basic agreement not to walk away from the all-but-barren table Kerry has set with such effort since July.

From the outset, Kerry’s program has enabled both leaders to focus their negotiating efforts bilaterally with Washington rather than across the table from each other. As a consequence, the process has become an unequal contest between Netanyahu and Abu Mazen for winning and pocketing concessions from Washington — on settlements, borders, security, Jerusalem — without creating a workable diplomatic context in which to make progress on a broad range of final status issues.

In a brutal contrast to Kerry’s expectations, the tangible burdens of his effort are falling principally on the United States — Washington’s purported offer to free Jonathan Pollard fits neatly into this category. If the parties themselves do agree at all, it is that each believes that the overriding US interest in continuing the process offers them an opportunity to make gains at each other’s — and Washington’s — expense.

Kerry’s outsized effort is seen by the players to have become all but desperate in recent days. On Israel’s Channel 2 news last night, presenter Yonit Levy was incredulous at the offer to free Pollard in return for Netanyahu’s agreement to release prisoners, slow settlement expansion and continue discussions until the end of the year: “For this, Washington is prepared to release Pollard!”

The Pollard offer, which has invited almost universal criticism in the United States, is symptomatic of the predicament Washington has created for itself. Not surprisingly, Kerry’s effort to salvage the talks has encouraged brinksmanship by both leaders. Netanyahu has reneged on his agreement to free 104 long-term Palestinian prisoners in four staggered releases, and has continued what President Barack Obama himself described as Israel’s “aggressive” settlement campaign. Netanyahu’s coalition partners, including members of his own Likud Party, vie with each other to declare that they will not agree to release Palestinian prisoners, even in return for Pollard’s freedom. Even Pollard, the weakest link in this chain, claims that he opposes such a demeaning association.

In the wake of Israel’s freeze in the prisoner release, Abbas, for his part, declared in a rare public broadcast on April 1, that he considers himself free of his obligation not to turn to the UN and its associated institutions to win relief from Israel’s occupation policies.

All of this noise, generated in large part because of shortcomings in the US approach, obscures an essential point that is the indispensable advantage and may yet be the salvation of Kerry and the process he has doggedly pursued. At the end of the day, neither Netanyahu nor Abbas have an interest in walking away from the table Kerry has set before them, especially if as a result they are blamed for Washington’s failure.

Yasser Abed Rabbo, the secretary-general of the PLO, insisted on April 2 that the Palestinians are still in the game. "We hope that Kerry renews his efforts in the coming days," Abed Rabbo told a news conference. "We don't want his mission to fail."

There is still a better than even chance that the players will somehow find a way to kick the ball down the road after Kerry’s nine-month deadline expires at month’s end. This achievement may not be much, but this is where everyone's interests converge.