Israel should give Palestinian reconciliation a chance

The Fatah-Hamas reconciliation took Israel and others by surprise, and while intelligence sources are skeptical about the move, it should be given a chance because Hamas might be ready to enter the negotiating tent. 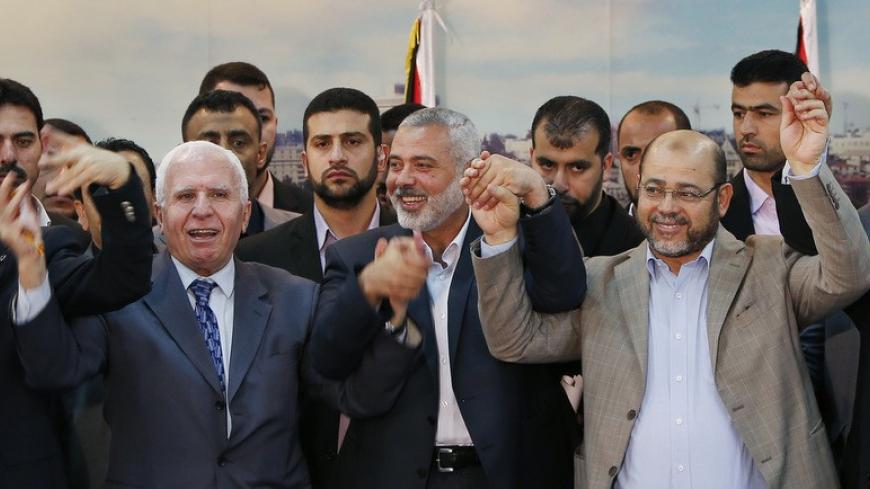 Let’s start with the good news. The reconciliation between Fatah and Hamas, between the Palestinian Authority (PA) and Ismail Haniyeh’s government, between the West Bank and the Gaza Strip — which rattled Israel, the United States and the international community — will help all parties to easily skip past the April 29 deadline of the Israeli-Palestinian negotiations while teetering onward toward the next stage.

On that date, the initial nine-month period allotted for the negotiations will have come to an end. As was to be expected, this pregnancy did not produce a healthy, smiling baby, but a probable continuation of the “blame game” between the two intractable parties. The greatest fear was that if they were unable to reach a deal to extend the negotiations, the whole affair would come to an end, at which time the Palestinians would campaign at the United Nations in a manner that would irreversibly kill the process. For now, at least, this concern has been dispelled.

Palestinian President Mahmoud Abbas, in a desperate attempt to atone for his serious tactical mistake, immediately declared after the reconciliation announcement that April 29 was not written in stone and that talks to extend the negotiations could take place thereafter. The cautious assessment in Jerusalem is that this is exactly what will happen, but in this region, cautious assessments kick the bucket with the same ease as they are born. You have been duly cautioned.

The Palestinian move took Israel, as well as its intelligence services, by surprise. At the April 24 security cabinet meeting, Foreign Minister Avigdor Liberman asked, with demonstrative anger, how it was possible that the intelligence services had failed to provide an early warning that a deal between Hamas and Fatah was brewing. His question was seconded by Finance Minister Yair Lapid and Justice Minister Tzipi Livni, Israel’s chief negotiator.

Maj. Gen. Aviv Kochavi, director of military intelligence, explained that such details had in fact been included in the intelligence reviews submitted to the ministers in recent weeks. He admitted, however, that they had not been highlighted, when perhaps they should have been. In fact, Kochavi conceded that even Israel’s military intelligence did not think that the reconciliation would happen so fast. The Palestinians have been talking about unification since the rift opened, seven years ago. They have already “unified” four times in the past. Each time, Israel panicked, but each time it turned out to be a public relations stunt that left no imprint on the ground. Incidentally, the current assessment is that this will also be the case this time around.

A former Shin Bet director once related the following story in a closed forum: Shortly after the 1993 Oslo Accord was signed and senior officials of the Palestine Liberation Organization (PLO), chief among them Chairman Yasser Arafat, returned to the territories, Israel decided to let the Palestinians exercise the “safe passage” between the Gaza Strip and the West Bank that had been agreed upon. A convoy of several buses with cheering Palestinians was allowed to travel via the Tarqumiyah crossing to Ramallah. “Three days later,” the director said, “I was approached by Ramallah’s Palestinian governor, who asked me to quickly shut down the safe passage and never reopen it.” Most of those who were able to make the crossing, the Shin Bet official related, were banished back to Gaza. Ramallah residents cannot stand the people from Gaza and vice versa. They are not the same people. The Palestinians are not monolithic. The unification between the Gaza Strip and the West Bank is artificial, which is why the reconciliation between these two entities needs real proof on the ground before we can believe in it. That’s as far as the story of the former Shin Bet director goes.

“Unification has yet to happen,” another senior Shin Bet official told me this week. “There is talk about unification, but it’s mainly a gimmick. It stands little chance of lasting. There are few and fluid common denominators between these two groups. Hamas is in a serious economic and diplomatic crisis. The Palestinian Authority, too, could lose part of the international economic support that keeps it going. They have found a temporary haven in each other’s lap. However, when it is put to the test, it will break down as it has so many times before. Hamas will not let Fatah into Gaza, and Mahmoud Abbas will not let Hamas get its foot in the West Bank’s door. I find it hard to believe that this will happen.”

During the April 24 cabinet meeting in Israel, a number of alternative courses of actions were proposed. Economy and Trade Minister Naftali Bennett, the most radical cabinet member, suggested immediately stopping the negotiations and implementing his plan to annex Area C to Israel. His proposal was rejected.

All in all, Israel’s reaction was proportionate and did not slam the door shut to future contacts. Prime Minister Benjamin Netanyahu quickly began a public diplomacy campaign, an opportunity virtually irresistible in such a case. The United States and Europe have both designated Hamas a terrorist organization. Abbas’ move is therefore a significant strategic asset for Israel in the blame game that has disguised itself as negotiations over the last nine months. As noted, however, for the time being it’s all talk on both sides.

During the cabinet meeting, a Shin Bet official expressed concern over the future of the tight security cooperation between Israel and the PA, thanks to which the resumption of a large-scale wave of terrorist attacks has been averted. It remained unclear, the official said, whether such cooperation could be maintained under the new circumstances. What would happen regarding arrests of Hamas militants, as well as those of people planning terrorist acts? Abbas, in one of his recent statements, addressed this concern: security cooperation will continue. The Palestinian security mechanisms will not be dismantled.

The truth of the matter is that a day before the reconciliation was announced, when Abbas received a large group of Israeli journalists in Ramallah, he sounded much more conciliatory and moderate. He talked about the possibility of dismantling the PA if the talks with Israel bogged down. He praised cooperation and swore that as long as he was alive, it would continue. The following day he did the exact opposite: He reconciled the “dissolving” PA and Hamas. Either he was not telling the truth on Tuesday, or he was not telling the truth on Wednesday. Those two days, however, during which Abbas contradicted himself and acted in diametrically opposing ways, cannot exist side by side.

The move by the Palestinian leader angered the Israelis, offended the Americans, deeply worried the Egyptians and the Saudis and embarrassed the Europeans. It was for Abbas a gross tactical mistake. According to several assessments, it was not only the Israelis and the Americans who did not believe that such a move would take place so quickly, neither did he. Realizing this a bit too late, Abbas tried containing the damage later in the week. In an unusual moment, even Hamas spokespersons demonstrated restraint.

Skepticism aside, one should not forget that this move should be given a chance. Is it perhaps possible that Hamas is forgoing terrorism and is actually entering the negotiation tent? Is it possible that Hamas will not form a direct part of a new government but will extend Abbas credit to continue the negotiations vis-a-vis Israel? Under certain circumstances, such a development could be deemed a positive response to the Quartet's three conditions (that Hamas recognize Israel, accept past agreements between Israel and the PLO and renounce armed struggle). If this is indeed the case, this portends a historic development. Will this be the case? History, statistics and logic suggest that it will not, yet hope should be allowed to flicker.

On the Israeli side, there is great relief. Once again, Netanyahu has been released from a dangerous deadline without the need for action on his part. As of now, the intransigent party is the other side. Meanwhile, Bennett, having climbed onto his high horse, declaring that he would leave the coalition if Israeli Arab prisoners were released, can slowly get off it without being humiliated. The danger of peace has been averted, for now. The coalition remains alive and kicking. We can continue doing nothing without paying a price, at least for the time being.