Israel's intelligence community does not think a Fatah-Hamas reconciliation will last in the long run, and the current Israeli government hopes it is right. 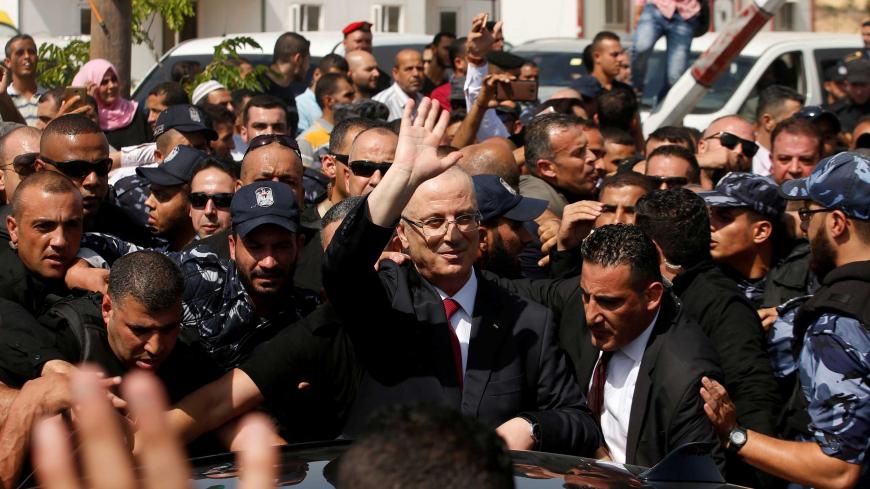 Israel's intelligence community has consistently maintained over the years that a viable reconciliation between the Gaza Strip and West Bank leaderships is unrealistic. Even if such an occurrence were suggested by an intelligence agency model, the relationship would be fragile and not last over time.

A former head of Shin Bet speaking to Al-Monitor on the condition of anonymity told the following story: Not long after the signing of the Oslo Accord (1993), Israel agreed to a trial period for a “safe passageway,” a route so Gaza residents could travel to the West Bank without having to pass through Israeli checkpoints. These were the early days of Oslo, when the winds of peace still blew in the region and optimism prevailed. “After less than a week,” recalled the former security chief, “the Ramallah governor turned to us and begged us to close the passageway. The Ramallah people simply didn’t want the Gaza people mingling with them.” He further said, “We are talking about two populations that are different and incompatible. There is no great love between Gaza and the West Bank, no real identification.”

Even today, with the passage of more than 20 years, Israeli intelligence continues to maintain that any reconciliation between Hamas and Fatah is a temporary meeting of interests and no more. It will not last long, intelligence sources have told Al-Monitor.

According to them, Hamas’ strategic goal continues to be ruling the Palestinian people, thus requiring that it push Fatah from its position of leadership. Sources in Israel say that this aim — even if seemingly far-fetched at the moment — was, and remains, Hamas’ ultimate goal. There are, in this respect, no differences of opinion between Hamas' past and present political and diplomatic chiefs, Khaled Meshaal and Ismail Haniyeh, and the movement's Gaza chief and former military leader, Yahya Sinwar.

On Oct. 2, a large Palestinian delegation from Ramallah arrived in Gaza for talks. Palestinian media celebrated the event, Egyptian media went out of their way to praise it, and people across the Arab world enthusiastically blessed the initiative. Hamas' top brass announced with great fanfare that the day of Palestinian national reconciliation had arrived.

Only Israel kept silent. As Shlomi Eldar wrote for Al-Monitor, the initial impression was that on this occasion Israel would not respond aggressively, like it did in 2014 to another reconciliation initiative. Instead, in 2017 it would remain relatively quiet and moderate, while keeping close tabs on the possibility that Palestinian President Mahmoud Abbas, who opposes the use of violence, might reassert authority over Gaza. The quiet lasted all of 24 hours.

Israeli Education Minister Naftali Bennett, chairman of the HaBayit HaYehudi, soon broke the silence, calling on the government not to transfer to the Palestinians the tax money collected on their behalf until three conditions are met: Hamas recognizes Israel, incitement against Israel ceases (along with payments to terrorists imprisoned in Israel) and Hamas returns the bodies of two Israeli soldiers it holds in Gaza.

A little later, Defense Minister Avigdor Liberman and Prime Minister Benjamin Netanyahu released denunciations of the Palestinians' actions. Liberman called the reconciliation between Fatah and Hamas a “blame game,” each going along with the move so it doesn't get blamed for the lack of unity. According to Liberman, Abbas is not willing to reconcile with Hamas and adopt the model Hezbollah has constructed in Lebanon, according to which the Lebanese government supplies civil services, and Hezbollah controls security with its armed forces. Liberman added that Israel should adopt a wait-and-see approach, but remain vigilant.

Netanyahu, not wanting to cede the floor to Bennett, announced, “We are not prepared to accept bogus reconciliations in which the Palestinian side apparently reconciles at the expense of our existence. Whoever wants to make such a reconciliation, our understanding is very clear: Recognize the State of Israel, disband the Hamas military arm and sever the connection with Iran, which calls for our destruction.”

As usual, a complicated drama is playing out behind the scenes: Israel has no real interest in a successful Hamas-Fatah reconciliation. A Palestinian unity government is likely to invigorate President Donald Trump’s efforts to promote a peace process, the last thing Netanyahu and his right-wing coalition want. In this respect, Israel finds itself almost completely isolated: The American administration backs the attempt at unity, because it views reconciliation as a significant tailwind behind Trump’s efforts to exhaust diplomatic negotiations. The Egyptians, in particular President Abdel Fattah al-Sisi, are investing everything in the unification effort.

Sisi loathes Hamas, viewing the Muslim Brotherhood as Egypt’s first and foremost strategic enemy. Therefore, the Palestinian Authority's return to controlling Gaza would be a significant achievement for him. Only Netanyahu is watching worriedly from the sidelines. Why he did not denounce the reconciliation before it began and instead wasted precious time before opening his mouth after Bennett is simple: As opposed to 2014, in this instance he does not face former President Barack Obama, but instead his “great friend” Donald Trump. It is difficult for Netanyahu to come out against initiatives backed by Trump. Difficult, but not impossible.

Members of Netanyahu’s inner circle believe that the main reason Abbas agreed to an ostensible reconciliation with Hamas is his fear of his archnemesis: former Fatah member Mohammed Dahlan. Abbas has kept a close, worried eye on the consolidation of plans for Dahlan’s return to Gaza in one role or another. To head off Dahlan, Abbas decided simply to preempt him. It began with the sanctions he imposed on Gaza, until the Hamas leadership got the message and decided to make up.

Sinwar has discovered that the day-to-day governance of Gaza is no piece of cake. The territory's isolation was increasing: a hostile Egypt loomed from the south, the enemy Israel glowered from the north, and stormy oceans prevailed in the West. For Sinwar and Haniyeh, an attempt at the “Hezbollah model” was acceptable as a last resort to the impasse at which Hamas found itself.

Will the current reconciliation, which seems more serious than previous attempts, really put down permanent roots? Egypt hopes it will, and so does the Ramallah leadership — but most of all, Washington hopes so. By contrast, Israel prays it will fall apart and predicts that is what will happen.

Netanyahu’s tribulations extend to other areas as well. The Americans continue to keep a tight lid on construction in the occupied territories. Thus, Netanyahu is not able to fulfill the numerous promises he has made to the settlers when Trump rose to power. Meanwhile, Haaretz reported on Oct. 4 that the American president had told UN Secretary-General Antonio Guterres that in terms of the feelers he put out for diplomatic negotiations, he found “Netanyahu more difficult than Abbas.”

None of this bodes well for Israel. At this point, however, all Netanyahu can do is keep up with the news and hope for the best.