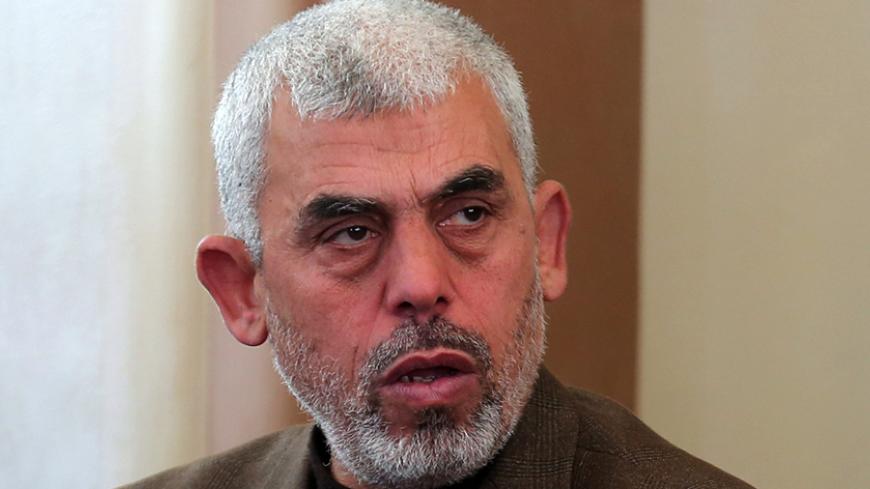 Yahya Sinwar, the new leader of Hamas in the Gaza Strip, attends the opening of a new mosque in Rafah, Gaza Strip, Feb. 24, 2017. - SAID KHATIB/AFP/Getty Images

Yahya Sinwar, the leader of Hamas in the Gaza Strip, held a series of meetings June 10-11 in Cairo, including with former senior Fatah official Mohammed Dahlan. Samir Mashrawi, a Dahlan associate who also attended the meetings, told Al-Monitor that the Hamas delegation and the delegation that arrived with Dahlan had met four times and discussed various issues to resolve the crisis in Gaza. Sinwar traveled to Cairo at the head of a Hamas delegation to discuss tightening security on the Gaza border with Egypt, increasing the power supply from Egypt to Gaza and extending the hours of the Rafah border crossing between Gaza and Egypt.

Al-Monitor has learned that the heads of Egyptian intelligence facilitated the meeting between the two men. Dahlan and Hamas had had a channel of communication in the past, and top Hamas officials had used it to convey messages to Egyptian President Abdel Fattah al-Sisi.

From Egypt's perspective, Dahlan is one of the few people able to raise donations and budgets from the wealthy Gulf states to help avert the impending humanitarian crisis in Gaza, a scenario that poses a threat to Cairo as well as Hamas. In fact, the Egyptians have an additional interest in a rapprochement between the former Fatah official and the Hamas leader, who were once bitter enemies.

Sisi is hoping that through his close friend Dahlan, he can get Hamas to mount more determined action against his government’s Islamist enemies in the Sinai Peninsula. If Dahlan goes along with the plan, he would be throwing a lifeline to Hamas by helping it maintain power in Gaza. Along with this carrot, there’s a stick: If Sinwar, who took office four months ago, fails to bolster security along the border with Egypt and sever ties with radical Islamist Salafist organizations in Gaza, he would risk the aid that Dahlan is supposed to obtain for Hamas.

Dahlan and Sinwar grew up together in the Palestinian refugee camp of Khan Yunis in the Gaza Strip. They played football together as children, but they went their separate ways when they grew up. Sinwar joined the Muslim Brotherhood’s Palestine branch, which became the basis for Hamas, while Dahlan helped found the Shabiba, Fatah’s youth movement in Gaza. They had not met since their teens.

Israel expelled Dahlan from the West Bank to Jordan in 1988 — a year before Sinwar’s arrest by the Israelis on charges of murdering Palestinians who collaborated with Israel — only to return to the territories in 1994 with the Palestinian leadership as a result of the Oslo Accord. Israel released Sinwar from jail in 2011 as part of the deal to obtain the release of an Israeli soldier, Gilad Shalit, held by Hamas.

A Dahlan associate told Al-Monitor on condition of anonymity that at the start of their meeting in Cairo, Dahlan and Sinwar reminisced about their childhood experiences in Gaza before getting down to business. The Hamas leader, according to the source, knows that only Dahlan can extricate Gaza from the severe crisis gripping it. Dahlan — since being expelled from the West Bank for the second time and from Fatah in 2011 on the orders of Palestinian President Mahmoud Abbas, who regards him as a threat — has been living in Dubai, where he has amassed significant political influence. He is also close to the Egyptian president, who worked hard to bring about a Dahlan-Abbas reconciliation, efforts that failed and resulted in a crisis between the Palestinian Authority (PA) and Egypt.

Until several years ago, Hamas regarded Dahlan as a bitter enemy. He had headed the PA's security forces and waged war on the movement's political and military leadership. Had he not left Gaza for urgent back surgery a month before Hamas overthrew Fatah in the territory in June 2006, Hamas would likely have executed him, a Gaza friend of Dahlan's said, speaking on condition of anonymity.

Now, due to Gaza's dire economic straits under Hamas' rule, an agreement with someone considered a devil until not so long ago could be welcomed by the movement. The previous Gaza head of Hamas, Ismail Haniyeh, recently named the movement’s political chief, sought Dahlan’s help in opening a channel of communications to Sisi after Egypt, in January 2015, declared Hamas a terror organization, a decision an appeals court rescinded several months later, in June.

Dahlan’s friends in Gaza insist that Abu Fadi, as he is also known, in trying to raise money for newlywed couples and impoverished families and to establish clubs for youths and the elderly in Gaza's refugee camps, is motivated by a desire to help his people. Dahlan’s actions, however, like those of Hamas and Egypt, are not devoid of politics and self-interest. Dahlan also wants to be able to return occasionally to Gaza to visit his family. “He misses his home, his people, his friends from the days of the Shabiba and Fatah, and the people who fought with him against the [Israeli] occupation whom he has not seen for over a decade,” said Dahlan's friend.

As for Dahlan's political interests, personal denials aside, Dahlan sees himself as Abbas’ successor. “He doesn’t want to be a president of a split Palestine. He wants to reunite Gaza and the West Bank into one united state,” a Dahlan associate said.

In the meantime, Dahlan has promised Sinwar to help raise funds to restore Gaza’s power supply. In the short term, he will try to convince Sisi to boost the electricity flow from Egypt. In the long term, he will attempt to mobilize funds for building a large power station in the Rafah area.

The Cairo meeting between Dahlan and Sinwar lasted two hours, at the end of which they agreed to stay in touch. “Convey my regards to the friends, and tell them to behave themselves,” Dahlan told Sinwar as he took his leave, according to the friend. Sinwar, said Dahlan’s friend, got the hint. He knows he will have to act responsibly if he wants help from his organization’s greatest enemy, who has recently become its greatest hope.