The mysterious meeting between Abbas and Sisi 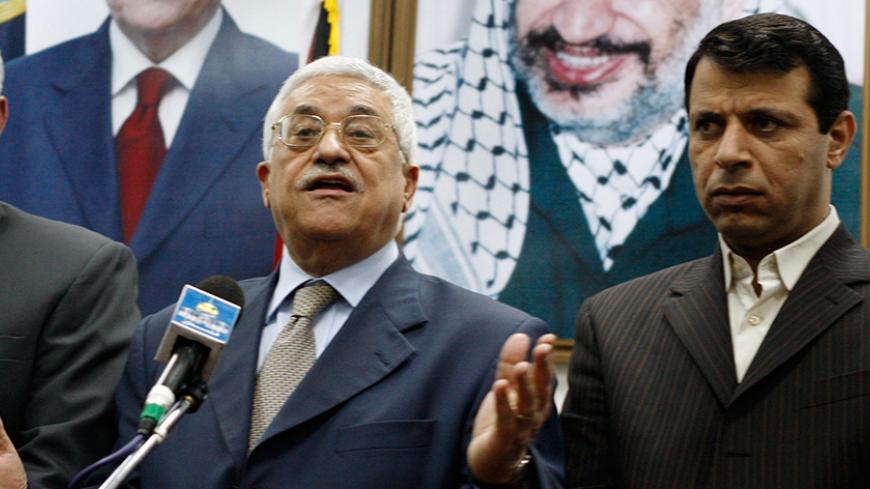 The ongoing conflict between Mohammed Dahlan, the former head of Fatah, and Palestinian President Mahmoud Abbas has soured relations between the Palestinian Authority (PA) and Egypt. A senior Palestinian source in the Gaza Strip told Al-Monitor that as long as the crisis between the two is not resolved, Egyptian President Abdel Fattah al-Sisi is unwilling to deal with Abbas.

In November 2015, Abbas met with Sisi in Cairo. At the end of the meeting, an official announcement was made that they had discussed “the humanitarian and security situation in the occupied territories and the growing crisis as a result of the security violation at the religious sites [in Jerusalem] and the ongoing settlement construction.” But the reason for Abbas' invitation to Cairo was something else entirely. The Palestinian president discovered, to his surprise, that Sisi had prepared a plan, a sort of “road map,” intended to “clean up” the Palestinian political arena. The plan demands, among other things, reconciliation between Abbas and Dahlan, who is now considered a close ally of Sisi.

The plan Abbas was presented with includes three interconnected demands:


The task of advancing the Egyptian plan was put to Khaled Fawzy, the head of the Egyptian General Intelligence Directorate, who holds the Palestinian portfolio in Egypt. Fawzy met with Abbas when he visited Cairo and explained to him how Sisi sees the regional map, the Palestinian arena and its relationship with Egypt. Fawzy also presented Abbas with a tentative timetable.

Sisi said at those meetings that he has no problem pursuing reconciliation with his rival Dahlan, and even promised Fawzy that when he returns to Ramallah, he would send two representatives to handle the timetable and mechanisms needed to advance the “road map” presented by the Egyptians.

It seemed that a meeting between Dahlan and Abbas could have taken place in Cairo at that time, and the Egyptian media, which showed much interest in Abbas' talks with Sisi, even reported this possibility. However, something happened that infuriated the Egyptians and caused a deep crisis in their relationship with Abbas.

Fatah spokesman Ahmad Assaf said in a press release that all the talks of reconciliation between Fatah and Abbas and Dahlan were false. “We will not make peace with Dahlan. We have no interest in reconciling with someone who has hurt Palestinian interests and was removed from the Fatah ranks,” he said.

According to the Palestinian source, Sisi and Fawzy were furious at the behavior of the Palestinian president. In their view, it was a dirty trick and a slap in the face of Egypt.

Why does the Egyptian “road map” depend on reconciliation between Dahlan and Abbas? What is the secret of Dahlan’s power? How has he been able to influence Sisi and succeed in building such a tight and impressive relationship with leaders of the Arab world? After all, Dahlan — formerly a commander of the Preventive Security Services in Gaza, a national security adviser and a minister in the PA — was banished from the Palestinian territories by Abbas, who also removed him from Fatah and presented him to the Palestinian public as the "enemy of the people."

“God is on his side,” the Palestinian source said. “We are surprised at how far he has gotten. Everyone was against Dahlan and despite that he grew stronger. He controls the field more than anyone else in the current Palestinian leadership, and he has regional support based on his familiarity with Hamas and the Muslim Brotherhood.” The same source also explained that Dahlan plays an unseen regional role, saying, “Thanks to him, the ties between Abu Dhabi and Egypt and Saudi Arabia are maintained.”

When the Egyptians asked people close to Abbas why he acted the way he did, the answer was that the Palestinian president felt enormous opposition within Fatah to reconcile with Dahlan, and so at this time he cannot advance such a move.

It is no secret that Dahlan had and still has many enemies within the Fatah movement. One of them is senior Fatah official Jibril Rajoub, Dahlan’s former friend. According to the Palestinian source, the crisis of faith between the two has been resolved, and the impression of senior Fatah members is that Rajoub would be “next in line” for banishment by Abbas after Dahlan.

As the situation of the PA deteriorates and its coffers are depleted, it appears that there is a chance that Abbas would accede — if only to save his rule and his position. On the other hand, he knows that reconciliation with Dahlan means that his rival would become the next Palestinian president. And he simply cannot stand that idea.