US, Israel on standby as Egypt pushes Palestinian reconciliation

The United States and Israel are laying low while Egypt tries to end the rift between Fatah and Hamas, which Cairo sees as an obstacle to regional peace and security. 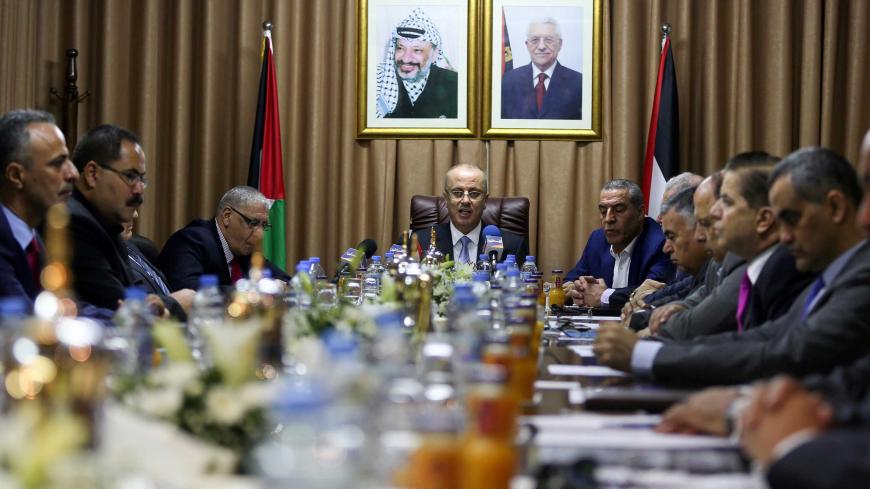 Israel facilitated the entry of Palestinian Authority (PA) Cabinet ministers into Gaza on Oct. 2 to attend a reconciliation meeting between Fatah and Hamas. It took Israeli Prime Minister Benjamin Netanyahu a day to respond to the event. Speaking at a Likud meeting in the West Bank settlement of Ma’ale Adumim, Netanyahu said, “We expect everyone who talks about a peace process to recognize the State of Israel and, of course, to recognize a Jewish state.” He added, “Whoever wants to make such a reconciliation, our understanding is very clear: Recognize the State of Israel, disband the Hamas military arm, sever the connection with Iran, which calls for our destruction.”

Contrary to past statements by Netanyahu opposing Palestinian reconciliation, his props this time did not include threats against Palestinian President Mahmoud Abbas or warnings of sanctions. Most of all, his choice of words differed in expression from that in April 2014, when Hamas and Fatah announced the establishment of a national unity government. “Abbas would rather have unity with Hamas than peace with Israel,” Netanyahu had tweeted.

Netanyahu's foreign minister at the time, Avigdor Liberman, concurred, saying that Abbas had to decide whether he wanted to make peace with Israel or with Hamas. Liberman described the signing of the unity agreement as “tantamount to a signature on the end of negotiations between Israel and the Palestinian Authority.” This time around, at least for the moment, Liberman is keeping quiet. In fact, it was the Defense Ministry, which he now heads, that was responsible for the Palestinian delegation getting into Gaza for talks.

Indeed, Israeli military authorities oversaw the arrangements allowing the 350 Palestinians from the West Bank to cross quickly and efficiently through the Erez crossing into Gaza. The delegation included PA Cabinet members, advisers, officials and security teams. “It went over like a well-coordinated military operation,” an Israeli military source told Al-Monitor, speaking on the condition of anonymity.

Thus, on Oct. 3, a new Palestinian unity government convened in Gaza for a special session, and the previously estranged sides ceremoniously announced that the decadelong rift between them had ended and that a new chapter in their relationship had begun. As reported in Al-Monitor, however, true reconciliation is still far off.

Despite the discernible difficulties clear to the leaders on both sides, a sense of heady optimism nonetheless prevails. On the evening prior to the festive meeting, news broadcasters in Gaza and the West Bank announced that this would be the last night of division, as both sides had chosen to restore the unity of the Palestinian people for the sake of the national interest.

So why didn’t Netanyahu threaten Abbas with sanctions or condemn him for an alliance with those who aspire to destroy Israel? Why did Liberman order Defense Ministry officials to arrange for the efficient entry of the Palestinian delegation into Gaza? Why didn’t Liberman condemn Abbas in his usual manner?

“This time is different,” a top Fatah official explained to Al-Monitor on the condition of anonymity. “Israeli threats against the Palestinian Authority, sanctions or even just [verbal] attacks on the PA and Mahmoud Abbas would, in fact, constitute direct threats against Egypt and its president, Abdel Fattah al-Sisi, who is sponsoring the reconciliation talks.”

According to the Fatah source, Egypt notified the United States and Israel on the progress of the rapprochement, making it clear that a Palestinian unity government is not only in Egypt's interest, but has positive implications for Israel and the Palestinians as well. Egypt regards such an agreement as vital to a regional peace deal, in which it hopes to play a major role. From Cairo's perspective, the Palestinian split between the West Bank and Gaza is an obstacle that must be removed for a diplomatic breakthrough on resolving the Israeli-Palestinian conflict.

The United States appears to share this view. President Donald Trump’s Middle East envoy, Jason Greenblatt, who visited Israel and the West Bank at the end of September, updated Netanyahu on the American position on the reconciliation and the significance of such a move for a US peace blueprint soon to be unveiled.

Trump had promised Abbas at their brief, Sept. 20 meeting in New York to present the principles of his blueprint within a few weeks. Yet it now seems clear that he will not do so until the fate of the internal Palestinian negotiations, due to continue in Cairo next week, becomes clearer. That means that as far as the Trump administration is concerned, the Israeli-Palestinian conflict will only be resolved under a regional umbrella, with Egypt playing a central role.

Should the Palestinians actually reconcile, it remains unclear what the Americans might consider a good agreement. Meanwhile, one cannot ignore that the Americans, like the Israelis, have not issued an official response to the talks in Gaza, even with Hamas still on the Department of State's list of foreign terrorist organizations.

As noted previously in Al-Monitor, Palestinian intelligence chief Majid Faraj enjoys a warm relationship with the Trump administration. CIA Director Mike Pompeo and Greenblatt see him as a moderating, calming influence that provides stability to Abbas’ regime and serves the interests of the United States and Israel’s security. Faraj is a pivotal participant in the Gaza talks. He is among those engaging with Hamas' leader in Gaza, Yahya Sinwar. The core issue on which everything depends is whether Hamas is willing to hand Abbas security control of Gaza. Israel would regard such an agreement by Hamas as a positive development, and the United States would see it as removing a major obstacle to launching Israeli-Palestinian negotiations. That is why Israel and the United State have decided to lay low, at least until they see whether Sisi’s plan withstands the test of reality.

Meanwhile Netanyahu, while careful not to threaten Abbas, is thinking several steps ahead. His words have been intended first and foremost for American ears. He is already trying to block whatever diplomatic initiative the Trump administration might present in the near future.