Prime Minister Benjamin Netanyahu exploits the Hamas-Fatah reconciliation in order to set impossible conditions for resuming talks with the Palestinians. 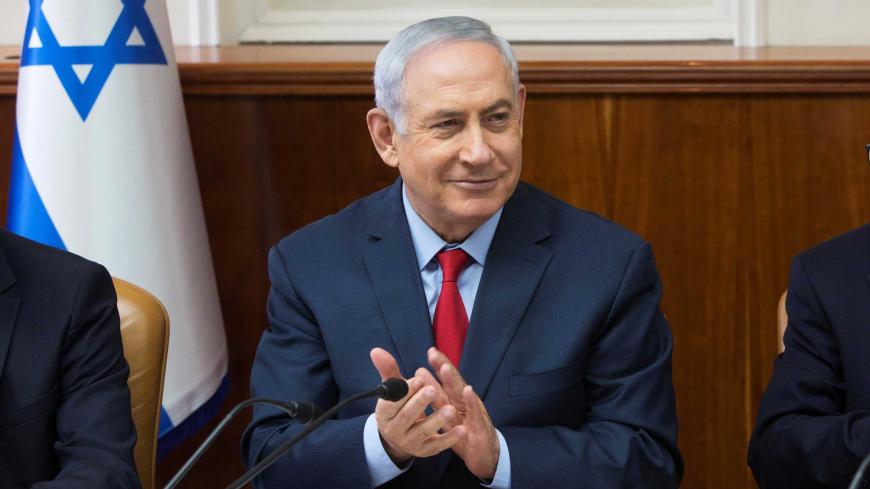 Israel's security Cabinet convened in special session Oct. 17 to discuss the recently signed reconciliation agreement between the two major Palestinian factions, Fatah and Hamas. Since Prime Minister Benjamin Netanyahu made clear his view on the deal after it was signed Oct. 12, there did not seem to be any reason for a nonscheduled meeting to adopt decisions that were hardly urgent. Netanyahu told members of his Likud Party Knesset faction Oct. 12 in the settlement town of Maale Adumim, "We expect everyone who talks about a peace process to recognize the State of Israel and, of course, to recognize a Jewish state." Unlike 2014, when Netanyahu threatened to impose sanctions against Palestinian President Mahmoud Abbas in the wake of the failed Hamas-Fatah agreement, this time there were no threats.

As previously noted here, neither Netanyahu nor his Defense Minister Avigdor Liberman wanted to, or could, vigorously protest the agreement reached with Egyptian mediation and in Egypt's clear-cut interests. The Americans, too, understood that Palestinian reconciliation at this stage could boost the prospects of an Israeli-Palestinian peace process and enhance the standing of Abbas, in addition to garnering broad Palestinian public support.

The series of decisions adopted by Israeli ministers do not affect any fundamental change in Netanyahu's Maale Adumim statements. However, a Cabinet seal of approval, or even a rubber stamp, was needed in order to present the US administration with an Israeli decision that enjoys the backing of ministers tasked with responsibility for Israel's most sensitive diplomatic and security issues. The Prime Minister's Office was quick to announce the decisions, saying Israel would not conduct negotiations with any Palestinian government based on Hamas.

The sides have not conducted any negotiations since the April 2014 collapse of talks between Israel and the Palestinians mediated by then-US Secretary of State John Kerry. Netanyahu met with Abbas only once since then, at the September 2016 funeral of former Israeli President Shimon Peres. There, in front of the cameras, Netanyahu's wife Sara Netanyahu invited the Palestinian leader to dinner at their home, but the dinner never took place.

Now, apparently fearing that a peace initiative by the Trump administration was imminent, Netanyahu, backed by his Cabinet, decided to take preventive measures to scuttle any US initiative with a series of preconditions.

These conditions include demands that Hamas recognize Israel and desist from terrorism, per the Quartet principles; lay down its arms, sever ties with Iran and hand back the bodies of Israeli soldiers killed in Gaza as well as Israeli civilians held there. That was not the end of the unconditional Israeli stipulations. They also included a demand that Abbas' government obtain full security control of the Gaza Strip (still under Hamas rule), including its borders, prevent smuggling into the Palestinian enclave and continue foiling Hamas' terror activity in the West Bank. The Cabinet also authorized Netanyahu to impose sanctions on the Palestinians in the future, such as withholding Palestinian taxes collected by Israel for the Palestinian Authority to offset its debts.

In order to understand the urgency of the special Cabinet meeting and its demands (some of them obvious, such as the return of the bodies, and others far less likely, such as Hamas' publicly recognizing Israel), one has to go back to remarks Netanyahu made at a Sept. 24 security Cabinet session. Netanyahu reported that US President Donald Trump was working on an Israeli-Palestinian peace plan and was determined to push it forward. Netanyahu came to this conclusion after meeting with Trump on the sidelines of the UN General Assembly meeting in New York in mid-September. "I presented our positions to the president. Trump is very determined and wants to reach the ultimate deal," he reportedly told the ministers.

Abbas came away with the same impression from a brief meeting with Trump in New York on Sept. 20. The same is true for his associates' meetings with American envoys Jared Kushner and Jason Greenblatt. The two envoys apparently promised Abbas in August that a diplomatic road map was in the works to serve as the basis for Israeli-Palestinian negotiations. In fact, Greenblatt visited Ramallah again this week on Oct. 16, when with Palestinian Prime Minister Rami Hamdallah, and discussed the reconciliation.

A senior Palestinian diplomatic source told Al-Monitor on condition of anonymity that Netanyahu's moves were obvious and that Abbas said as much to his American guests. "[Netanyahu] waited for an opportunity to stifle the American initiative. We saw this a long time ago," the source said. According to the source, even before the reconciliation deal Netanyahu had set forth recognition of Israel as the Jewish state as a precondition for any talks, knowing it was a nonstarter that would preclude any progress.

Meanwhile, it seems that the US steps in line with the Israeli Cabinet. Greenblatt declared Oct. 19, "Any Palestinian government must unambiguously and explicitly commit to nonviolence, recognize the State of Israel, accept previous agreements and obligations between the parties — including to disarm terrorists — and commit to peaceful negotiations. If Hamas is to play any role in a Palestinian government, it must accept these basic requirements."