Palestinians to give Trump team ultimatum on peace plan

Palestinian President Mahmoud Abbas will reportedly present US envoys Jason Greenblatt and Jared Kushner with an ultimatum when they arrive this week: If no real progress is made on their peace plan within 45 days, he will go to the UN instead. 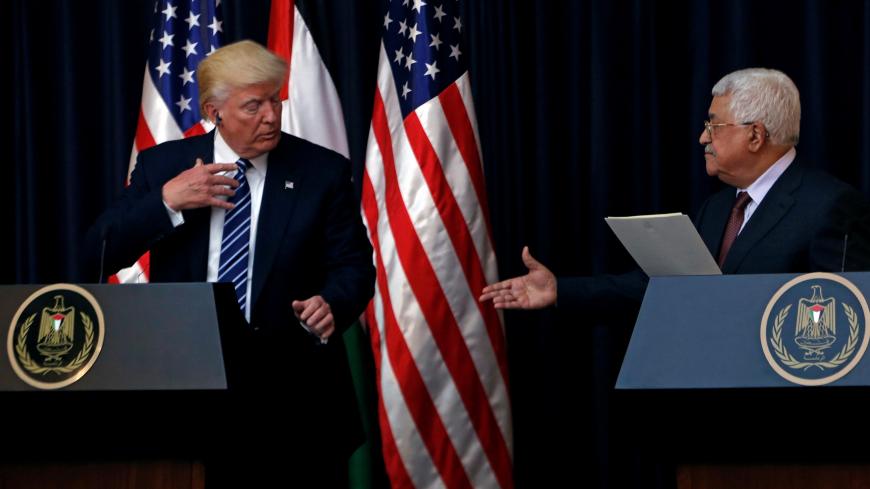 Palestinian President Mahmoud Abbas extends his arm to shake hands with US President Donald Trump during a joint news conference at the presidential headquarters in the West Bank town of Bethlehem, May 23, 2017. - REUTERS/Mohamad Torokman

Palestinian President Mahmoud Abbas surprised participants of an Aug. 20 meeting at his Ramallah headquarters with members of the left-wing Israeli Meretz Party when he launched a broadside attack on the Trump administration just days ahead of a planned visit to the region by Trump's top envoys, Jared Kushner and Jason Greenblatt. Abbas said he had met with the American representatives 20 times since Trump took office in January, but he was no closer to understanding what Israeli-Palestinian peace plan they have in mind. “Each time they reiterate their commitment to a two-state solution and the stop to settlement building. I urge them to tell [Prime Minister Benjamin] Netanyahu that, but they refrain,” he said.

The Israelis were not the only ones taken aback by Abbas’ remarks. Senior Palestinian officials present at the meeting were, too. The Palestinian Authority (PA) has, after all, trod wearily with the Americans until recently in an effort to achieve legitimacy in the eyes of the new administration. Abbas set up a top-level team, including experts on US politics, in a bid to decipher the nature of the new president and the best way to approach him. The group even scored some points: Trump rolled back his election campaign commitment to move the American Embassy from Tel Aviv to Jerusalem and even hosted Abbas last May at the White House less than four months after moving in. But since then, the Palestinians are under the impression that the Trump administration is not interested in getting entangled in the complex task of restarting the moribund Israeli-Palestinian negotiations, which have been the undoing of many previous administrations that were far more focused. “I don't understand their conduct toward us, as inside his country the administration is in chaos,” the Palestinian president was quoted as saying.

Al-Monitor has learned that Abbas’ remarks to the Meretz delegation were only the prelude to far harsher talking points he has prepared for his Aug. 24 meeting with the Trump envoys. A senior Palestinian source who spoke on condition of anonymity said a decision had been reached after lengthy negotiations at top PA levels, including consultations with its team of Trump experts, to present Kushner and Greenblatt with a clear ultimatum: Unless progress is made within 45 days on launching talks with the Israelis, the Palestinians will consider themselves no longer committed to the US channel and will turn to an alternative plan on which they have been working for the past two years.

The Palestinian source explained that Abbas is running out of the time he has to govern and cannot spend what little time he has left as president on “games.” The source believes a month and a half is sufficient time for the White House to decide whether to take an active and real part in mediating between the Palestinians and Israel — in other words, whether the administration plans to publicly declare that the United States regards the two-state solution as the only solution and demand that Netanyahu stop creating facts on the ground (that is, building settlements) and settle down to real negotiations. “If we don’t hear within a month and a half that the American team has stopped talking and started doing, Abbas intends to mobilize anyone and everyone he can for the UN General Assembly session on the establishment of a Palestinian state, regardless of the Israeli and American reactions,” said the official from Ramallah.

The Palestinians understand that the current occupant of the Oval Office tends to act impulsively, and such a move could prompt him to take out his anger on Abbas — but “we have no choice,” said the source. He was referring to the fact that the stalemate in talks with Netanyahu’s government has put Abbas in a bind. His domestic enemies are growing and getting stronger, the crisis with Hamas is deepening despite reconciliation attempts and at the same time Israel keeps brazenly expanding its West Bank settlements. According to the Israeli Bureau of Statistics, the year 2016 saw 2,630 housing units constructed or partially constructed in West Bank settlements — an increase of 40% compared with the year 2015.

This past month, the PA has renewed its contacts with European states and other states that backed it at previous UN votes. Ties with China have also grown considerably closer. President Xi Jinping told Abbas during a visit to Beijing last month that China plans to initiate a peace plan of its own to advance talks between Israel and the Palestinians. Xi even termed the Palestinian people “friends, partners and brothers.”

Palestinian Ambassador in Washington Husam Zomlot, a senior member of the Abbas advisory team on US issues, could hardly have been clearer about Palestinian despair over the handling of the peace talks issue by the Trump administration. At a meeting he convened with journalists Aug. 17, Zomlot said the PA could revive its international campaign for recognition as an independent state, and he hinted that the impending Kushner-Greenblatt visit was crucial to the Palestinian decision on its next moves. His comments were intended as an initial trial balloon designed to make clear to the Americans that the Palestinians had lost patience. The remarks were met with American indifference, which resulted in Abbas’ harsh criticism of the Trump administration in his meeting with the Meretz representatives.

The Palestinian official who spoke with Al-Monitor said that even though this change in attitude could result in serious damage to the PA’s relationship with Washington, these were not empty threats and the ultimatum to Kushner and Greenblatt had been carefully thought out. Ramallah wants to know within 45 days which way the Americans are heading on the Palestinian issue so that it can decide in October on the diplomatic path it intends to take.