By refusing to reconcile with Hamas, Palestinian President Mahmoud Abbas is blocking an Israel-Hamas agreement that would rock Palestine during a delicate transition in leadership. 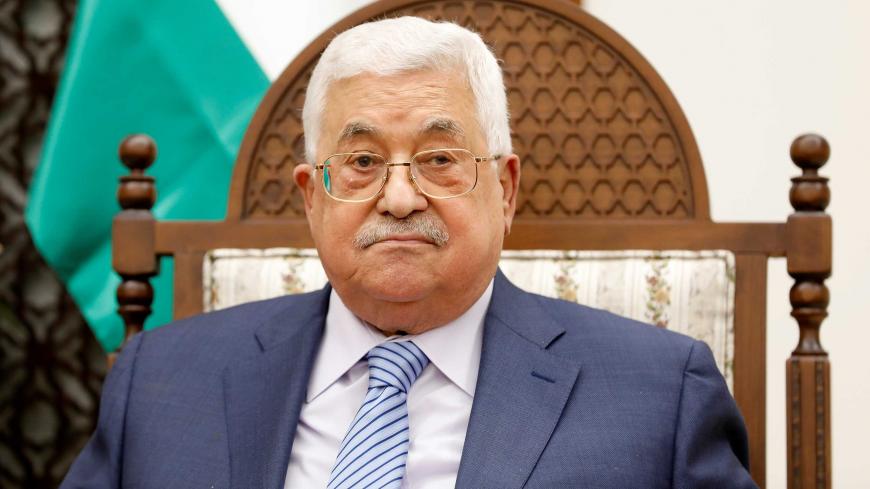 Hamas leader Yahya Sinwar's deputy, Khalil al-Hiyya, criticized Palestinian President Mahmoud Abbas on Aug. 30 for his refusal to reconcile with Hamas and remove another obstacle on the road to an arrangement with Israel.

In a speech in Gaza, Al-Hiyya said, “The only ones who insist on not removing the siege are Fatah and Abbas.” Al-Hiyya, who was a part of the Hamas delegation to the recent talks in Cairo, added that the Palestinian leadership in Ramallah is working against the interests of the Palestinian people residing in Gaza. Later in his speech, he hinted that the Palestinian Authority is interested in leading Hamas to an armed conflict with Israel, because if no cease-fire is reached, Hamas’ struggle against the siege will intensify.

Sinwar said similar things a day earlier in a five-hour meeting with journalists in Gaza. In that conversation, he laid out Hamas’ capabilities if it is forced into an armed conflict with Israel and said that Abbas is the obstacle to an arrangement.

The two movement leaders are not wrong. Abbas has until now opposed the intra-Palestinian reconciliation despite the pressure on him to endorse it. In recent months all attempts to bring Fatah and Hamas closer, and thus enable a rehabilitation plan for the Gaza Strip, have failed. Fatah leaders have explained that Abbas insists on upholding the principle of “one weapon, one authority,” which means that Abbas insists on controlling the Gaza Strip, both on the civil administrative level and on the security one. His associates have explained that he is not interested in being a fig leaf for Hamas, on doing the hard work in the Gaza Strip and paying the political and diplomatic price for it, because he would quickly find himself trapped between Israel and Hamas.

A Hamas source told Al-Monitor that Abbas says this to reduce the pressure on him. According to the source, a member of the political arm of Hamas, the Egyptians offered to Abbas’ representatives at the reconciliation talks in Cairo a comprehensive action plan and collateral that were acceptable to the head of the delegation, Azzam al-Ahmad, who is responsible for intra-Palestinian reconciliation within Fatah. But every time the representatives returned to Ramallah, the tone changed and all of Egypt’s suggestions were rejected.

Sinwar also confirmed this account. In his conversation with journalists in Gaza he claimed that the Fatah representatives’ responses to the latest Egyptian suggestions were even worse than their responses to previous ones.

According to Al-Akhbar, Fatah representatives to the reconciliation talks announced that they will not continue the talks in their current format. Their recurrent argument is that Abbas insists on holding all authority in the Gaza Strip and is not willing to budge a inch.

A senior source in Fatah who is not one of Abbas’ supporters told Al-Monitor that there are other reasons for Abbas’ refusal. “If President Abbas really wanted reconciliation, he would have accepted or amended the reconciliation suggestions,” said the source on condition of anonymity. According to him, Abbas is not so naive that he believes that Hamas would give over all security authority over to him at once, and even Israel and Egypt agree that it must happen gradually.

According to this source, there are other reasons that Abbas is raising obstacles and prevents any advance in intra-Palestinian reconciliation, even at the expense of the suffering of Gaza residents and threats from Hamas that without an arrangement another bloody war will soon break out.

The main reason, he said, is that Abbas is very ill and at the end of his political career, and lacks the strength to deal with the challenge of Gaza. Israel’s Channel 10 reported Aug. 30 that sources in Abbas’ office told the channel’s analyst Zvi Yehezkeli that the president is accompanied by a doctor at all times and that senior Fatah members who recently visited his office were astonished to find he has difficulty recognizing them.

The Fatah source added that Abbas is not the only obstacle to reconciliation. In view of his health condition, senior members of the Fatah movement are readying for a battle over succession, and anyone who sees himself as a contender for his office is preparing for a violent struggle and recruiting armed forces who would stand on his side if needed.

According to the source, Abbas’ deputy, Mahmoud Al-Aloul, Chairman of the Palestinian Soccer Association Jibril Rajoub and the head of general intelligence, Majid Faraj. estimate that the entry of Palestinian Authority forces to the Gaza Strip in the framework of reconciliation with Hamas could harm their chances of being chosen to replace Abbas. Entering Gaza would change the rules of the game, and each candidate prefers to keep the status quo they know so well. Al-Aloul, Rajoub and Faraj, who are all close to Abbas, are influencing him not to agree to reconciliation because of the “one weapon, one authority” principle, but according to the source, they themselves don’t believe in it, but are rather considering their personal interests.

The widespread of opinion of many Fatah members is that the expected changes in the movement's leadership, the leadership of the Palestine Liberation Organization and the Palestinian Authority don’t allow dramatic decisions to be made at this point in time, a move that could greatly strengthen the rival movement, Hamas. The election of a new Fatah leader will likely lead to general Palestinian elections, and none of those who see themselves as candidates are prepared at this stage to change the rules of the game for fear that Hamas would win in these elections, if and when there’s an agreement to hold them. Thus, the popular belief is that reconciliation between Hamas and Fatah could be realized only after a few more years, after a successor is chosen for Abbas and the Palestinian Authority is stable following all the expected upheaval.

But there’s another reason that blocks advancement toward a cease-fire with Israel. Leaders of the Fatah movement, starting with Abbas and ending with the last of its activists, are not interested in any connection with the Donald Trump administration, which they consider hostile. Washington is to be found behind the scenes in the reconciliation and arrangement talks in Cairo. Jason Greenblatt, Trump’s emissary to the Middle East, attacked Abbas for his refusal and argued that the Palestinian Authority should be part of the solution for the Palestinians of Gaza. As far as Fatah and Palestinian Authority leaders are concerned, attaching Trump’s name to the process is another reason to oppose it.