The war over Fatah leadership has begun 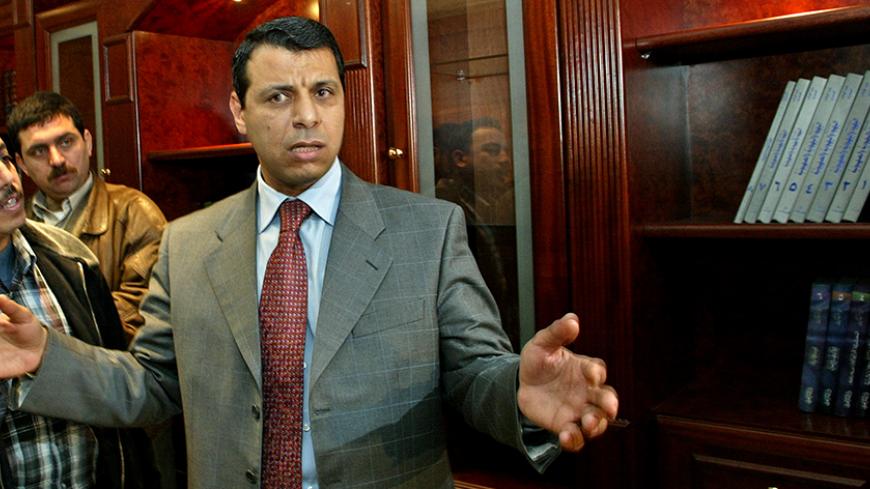 On the eve of his departure to Ankara on June 24 to meet with Turkish President Recep Tayyip Erdogan, Khaled Meshaal, the head of Hamas' political bureau, invited journalists to his hotel in Doha to react to the expected reconciliation agreement between Israel and Turkey. "There is a regional plot to parachute someone from the outside to rule Gaza and Ramallah," he cautioned.

Although he did not name the person he believes is poised to threaten Hamas' rule in Gaza and Palestinian President Mahmoud Abbas' rule in Ramallah, the prevailing belief is that he was alluding to former senior member of Fatah, Mohammed Dahlan. Ever since Avigdor Liberman was appointed Israel's new defense minister on May 30, rumors have been spreading about the intention to "crown" Dahlan as Palestine's next leader.

According to Palestinian and Israeli sources, in January 2015, Liberman, who then served as the foreign minister in Netanyahu's previous government, secretly met with Dahlan in Paris in a meeting brokered by their joint friend, Austrian businessman Martin Schlaff. The two reportedly discussed "Palestinian Authority affairs."

Back then, Liberman and Dahlan emphatically denied those reports, yet Abbas did not believe the denials. Then-Shin Bet Director Yoram Cohen scrambled to the PA headquarters (Muqata) in Ramallah to placate the irate Palestinian president, reassuring him that the meeting had not been facilitated by or on behalf of the Israeli government.

Not only have the clouds of conspiracy hovering over Gaza and Ramallah not dissipated since the news of that meeting was leaked, but they have in fact become heavier and more ominous. The new tune coming out of the Israeli Defense Ministry in Tel Aviv in the wake of Liberman’s appointment is that Abbas is an "obstacle" and that another military operation in Gaza is "inevitable."

The PA has already started the countdown toward the end of Abbas' rule. The identity of his successor has been preoccupying the Palestinian leadership more than ever in view of mounting estimates within the PA that Abbas plans to step down in 2016.

Dahlan has many supporters willing to follow him come rain or shine, yet at the same time he has racked up bitter rivals, one of whom is senior Fatah official Jibril Rajoub. Like him, many senior Fatah members regard Dahlan as an existential threat to the PA and the Fatah movement in general.

The mere mentioning of a Liberman-Dahlan nexus — whether true or not — is enough to stigmatize Dahlan and provide his rivals with much ammunition (which they use repeatedly).

In the Gaza Strip, the situation is even more complex. Dahlan's relations with Hamas have remarkably improved thanks to the close ties he has fostered with Egyptian President Abdel Fattah al-Sisi. The leaders of the Gaza-based movement had hoped that Dahlan would help them mend fences with Sisi. They also welcomed the infusion of money from the Dahlan Foundation in the Gaza Strip aimed at promoting projects and helping the needy. Hamas leaders in Gaza cannot afford to reject generous financial aid even if Dahlan is the sponsor. Whether or not the latter's actions stem from sincere concern for his own people, it is patently clear that those national projects bolster and cement his standing.

Al-Monitor has learned that a battle has been raging in recent months within the Hamas movement — with Meshaal and the movement's leadership in Qatar against the leaders in the Gaza Strip — concerning the generous aid Dahlan has been extending to Gaza. A Palestinian source associated with Dahlan has told Al-Monitor on condition of anonymity that Meshaal is doing whatever he can to sabotage important projects in the Gaza Strip that are financed with "Dahlan's money," including those seeking to help the residents of the refugee camps. The spanners he has been throwing in the wheels of those projects, the Palestinian source said, has greatly upset the leaders of the Gaza Strip, especially in view of the fact that the project to rehabilitate Gaza has been stymied by Abbas, Dahlan's arch rival.

The attitude toward Dahlan within Hamas highlights the tensions and different opinions between Hamas' two leaderships — the one in Gaza and the one in Qatar. Operating outside of Gaza, Meshaal is motivated by political considerations and dispassionate interests. The leaders in Gaza, by contrast, weigh things according to the end result. The reconciliation between Gaza-based Hamas leaders and Dahlan and their attitude toward the person who was considered a bitter enemy from the time he was the head of the Palestinian Preventive Security in Gaza, does not stem from love or true friendship. Rather, it is based on pure interests.

According to two senior Hamas leaders, Ismail Haniyeh and Mahmoud al-Zahar (who in the past lambasted the person who humiliated him in the intelligence cellars of Preventive Security), only Dahlan can serve as a bridge between them and Sisi. Furthermore, the projects he has been promoting in the Gaza Strip, including assistance to the needy and young couples, help to reduce pressure on them as well as slightly decrease the criticism leveled at them by Gaza residents.

Hamas, much like Fatah, cannot let go of the thought that the massive power Dahlan has gathered thanks to his ties and the money he has been infusing into Gaza and the West Bank pave his way to the Muqata in Ramallah to replace his bitter enemy Abbas. However, to contend that this is a regional plot is far-fetched.

Indeed, Meshaal did not tell the journalists whom he invited to his hotel in Doha who the regional players are in on the "plot." Yet it seems everyone understands the imaginary axis he was depicting. He suspects that Egypt, Israel, the United States and even Saudi Arabia, which has recently extended aid to the Gaza Strip, are all collaborating with the "devil," to wit, Dahlan.

That being said, anyone who thinks that Dahlan faces smooth sailing from here on underestimates his opposing forces in the West Bank. Ever since he stepped into the PA after the 1993 Oslo Accord, Dahlan's main power emanates from the Gaza Strip. His opponents and enemies in the West Bank rallied around his former friend now-turned rival Rajoub. They won't be serving him the PA on a silver platter. They're lurking around the corner.