Who benefits from the appointment of Abbas’ deputy? 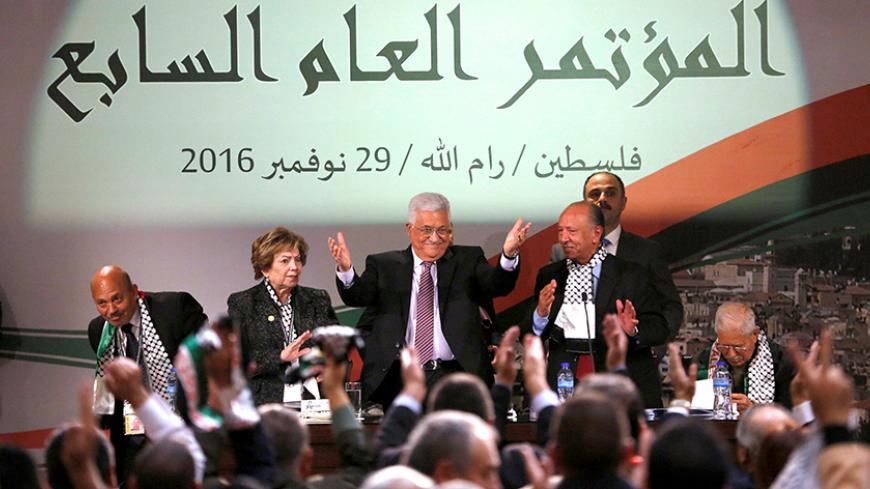 Is the Fatah movement's choice of Mahmoud al-Aloul as deputy to Palestinian President Mahmoud Abbas surprising? It depends on whom you ask.

Many West Bank residents paid close attention to Fatah's recent internal elections on the chance of getting a hint about who will one day succeed the 81-year-old president. They were certainly surprised to see Aloul “dropped into the post.” He is a relatively unknown figure who has not held a senior position in the movement for years. One group that was not surprised by the decision was the cadre of Fatah veterans. Over the years, they have learned, often with their flesh, that Abbas will do everything and use every means to distance anyone who might pose the slightest shadow of a threat to his leadership.

Aloul — a former Nablus governor, member of the Fatah Central Committee since 2009 and head of the Tanzim, Fatah's military wing, in the West Bank — is considered a hawk. Following the abduction and murder of three Israeli teens in the Etzion settlement bloc in June 2014, Aloul claimed that it was all part of an Israeli ploy to bring down the Fatah-Hamas unity government. Members of Fatah told Al-Monitor that the election of a hawk as Abbas' deputy at a time when the president is trying to give the Palestinian Authority (PA) and Fatah a more moderate, pragmatic image is bewildering.

Although he is the head of the Tanzim, Aloul has no base of supporters. He certainly lacks the power base of someone like Jibril Rajoub, who spent his years in the PA actively recruiting a base of supporters who would follow him through fire and water. Regardless of whether they were surprised by the choice, everyone admits that Aloul lacks the charisma needed to one day become the leader of the movement. At this stage, however, that is precisely his greatest advantage. He does not pose a threat to Abbas. In fact, throughout his years in Fatah, Aloul has failed to show the kind of desire for leadership that would keep Abbas awake at night.

In contrast to Aloul, Rajoub was only elected secretary-general of the movement. While he will not admit it publicly, his inner circle told Al-Monitor that he knows that Abbas fought tooth and nail to prevent him from being elected as his new deputy out of concern that Rajoub would accumulate even more power for the impending battle over the succession. While being elected deputy to Abbas hardly ensures that the winner will one day take over from the leader, it undoubtedly grants the newly elected deputy a senior position in the withering Fatah movement, which has not had an infusion of fresh blood for years.

There are those who are praising Aloul's election to the second-most important position in Fatah. These include, among others, supporters of former senior Fatah member Mohammed Dahlan, who admit that they were particularly pleased with Rajoub's rejection. They know that Abbas' insistence on distancing people with charisma, talent and ambition from positions of power helps advance the return of Dahlan to the Palestinian political arena as a unique individual who will tower over everyone else. That is exactly what made Abbas portray Dahlan as a bitter rival and enemy of the people.

A Palestinian source in the West Bank close to Dahlan’s supporters told Al-Monitor on the condition of anonymity that Abbas has acted uncharacteristically and shot himself in the foot. “He has always acted against Dahlan. He fervently opposes any efforts at reconciliation by Egyptian President Abdel Fattah al-Sisi, all out of concern that [Dahlan] will amass power and throw him out of office. At the same time, however, Abbas has also weakened those people who could form an opposition force to Dahlan.”

Though rivals now, Rajoub was once Dahlan's closest friend. After working side by side with late PLO leader Yasser Arafat in Tunis, they returned to the territories after the signing of the Oslo Accords in 1993 to serve as heads of the Preventive Security Force (PSF) in the West Bank (Rajoub) and Gaza (Dahlan). Then after the Israel Defense Forces destroyed PSF headquarters in Beitunia during the second intifada, Rajoub accused Dahlan of collaborating with the Israelis against him. The two best friends became bitter rivals, with each believing that he was the preferred candidate to head the PA. They each have acted in their own way to achieve this goal.

This does not mean that when the time comes, Dahlan and Rajoub will not forge a coalition to overthrow Abbas or possibly share his position if Abbas resigns voluntarily. “In politics, everything is possible,” a source close to Dahlan told Al-Monitor on the condition of anonymity. As an example, the source cited the reconciliation between Dahlan and the Hamas leadership in Gaza, which considered him a mortal enemy for years and deemed him worthy of elimination. Dahlan was targeted for killing during Hamas' 2007 coup in Gaza, and activists from the Izz ad-Din al-Qassam Brigades, Hamas' military wing, destroyed his villa in Gaza. Now, however, Dahlan is the man who was able to build bridges between Hamas and Sisi in an attempt to ease the closure on Gaza and launch a dialogue between the two parties.

Meanwhile, Abbas continues to wield considerable power within the Fatah movement. At the movement's congress last November in Bethlehem, the president made a point of expelling activists suspected of supporting Dahlan or of being what he considered “disloyal.” The election of Aloul as his deputy and the pushing aside of Rajoub are proof of his power. However, at the same time, Abbas also reinvigorated an old-new opposition to him, one with considerable potential at that. While a Rajoub-Dahlan coalition is not yet on the table, a senior member of Fatah told Al-Monitor that the worst possible thing that could happen to Abbas is that the two most powerful people in Fatah, Rajoub and Dahlan, come to see him as a dictator and an obstacle to the future.