Stakes rise as battle over Abbas’ successor heats up

Palestinian President Mahmoud Abbas' decision to promote Mahmoud al-Aloul as his deputy is perhaps the surest sign yet that the end of the Abbas era is imminent. 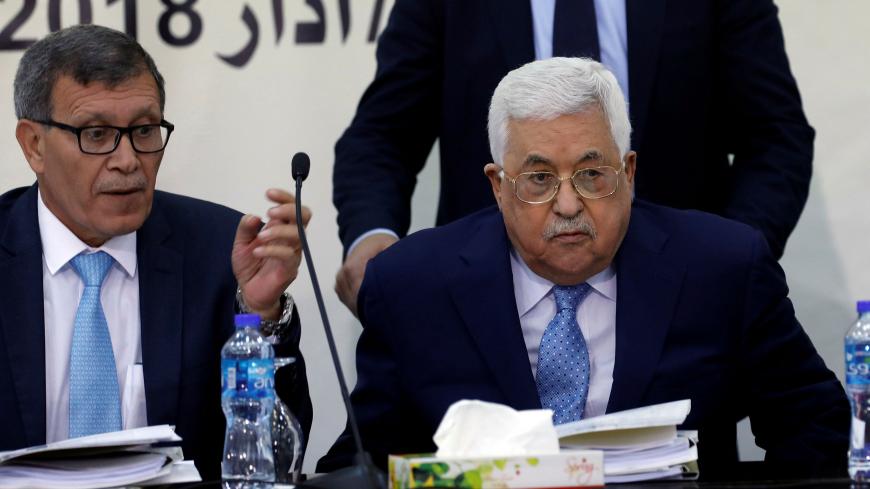 The reports surfacing about the impending resignation of Palestinian President Mahmoud Abbas are nothing new. Over the past year, similar rumors emerged repeatedly only to be proven false. Now, however, all indications suggest that the end of the Abbas era is imminent.

The PLO and its largest faction Fatah, both headed by Abbas, are preparing for a change of guard. A Palestinian source told the popular London-based Al-Hayat newspaper that when the Palestinian National Council convenes in May, the PLO institutions are expected to name a successor to the president, with Abbas lobbying for his associate Mahmoud al-Aloul. In February 2017, the Fatah Central Committee meeting in Bethlehem chose Aloul as deputy head of the party, a post that had not previously existed. He had served as the commander of Fatah’s armed wing, the Tanzim, but was a relatively unknown figure and his appointment surprised many.

Top Fatah officials claimed that Abbas chose Aloul to head off more popular would-be successors, among them Palestinian senior official Jibril Rajoub, chief Palestinian negotiator Saeb Erekat and even senior Fatah member Marwan Barghouti, who is serving several life sentences in an Israeli prison. The officials also said Abbas did all he could to prevent the participation of representatives from the Gaza Strip in the Central Committee meeting, fearing they would sway the vote in favor of his bitter enemy from Gaza, former Fatah senior Mohammed Dahlan.

A year on, Abbas now appears determined to name his deputy as his successor to lead the Palestinian Authority (PA).

According to the latest reports, Fatah may not even wait until the Palestinian National Council meeting in May, as previously reported by Al-Hayat, and would announce Aloul’s appointment in the coming days or weeks given Abbas’ deteriorating health.

Al-Akhbar reported March 5 that at a meeting of the Fatah Revolutionary Council last week in Ramallah to discuss the crisis in ties with the United States and the demise of President Donald Trump’s promise of an “ultimate deal” for Israeli-Palestinian peace, Abbas told participants that it might be their final meeting. He also sought to change the Fatah bylaws so that Aloul could stand in for him in case he was absent until the movement holds elections.

Concern for the 82-year-old leader and the upheaval his departure is expected to generate prompted Egyptian President Abdel Fattah al-Sisi to call Abbas this week and inquire about his health. No other information has been made available about their conversation.

Abbas’ recent hospitalization in Baltimore strengthened speculation that he is ill with cancer, although his aides insisted the chairman had simply undergone routine tests. Upon his return to Ramallah, he was quick to convene the Revolutionary Council and begin proceedings to change the bylaws concerning the appointment of his successor.

Aloul’s impending appointment is a clear sign that we are nearing the end of the Abbas era and the start of a succession battle. Anyone who thinks Aloul’s appointment will find smooth sailing within Fatah is wrong.

A Fatah source told Al-Monitor on condition of anonymity that Abbas will not disappear from the Palestinian political arena “tomorrow morning.” He declined to confirm or deny reports about Abbas’ health, but said, “One thing is clear: It’s important to establish a protocol so that everything goes smoothly once the president decides he wants to step down.” He said senior Fatah officials will support the changes Abbas seeks and will act to forestall chaos in the PA.

However, a Palestinian source close to Dahlan said on condition of anonymity that the changes could encounter obstacles “if no consideration whatsoever is given to the role or wishes of Dahlan.” This source claimed most Palestinians hate Abbas and will be happy to see a different leadership take over. He pointed to reactions on social networks, saying, "People are expressing joy and saying it’s time for him to go.” Popular social activist Fadi Elsalameen, who in the past exposed corruption scandals within the PA, demanded that Abbas inform his people that he has cancer so that all Palestinian institutions can properly prepare for a change in government and avoid chaos in the West Bank. “People have started buying weapons, and the West Bank will turn into a battleground among Palestinian factions warring for control of the PA,” he warned.

According to Dahlan’s associate, “I don’t foresee a war and bloodshed, but there will certainly be tension. People will not be willing to accept a leader picked by Abbas.” He noted that Dahlan will not make any political moves for now and would not do anything to harm his people — certainly not try to take power by undemocratic means. Nonetheless, he once again cautioned that the Palestinian people will not want to see an Abbas loyalist assuming his role at the helm of the PA.

Abbas has been serving as Palestinian president for 14 years, since the death of PLO leader Yasser Arafat in 2004. He will probably strive to steer the leadership change gently in small, measured steps to preserve the PA’s integrity. However, he will not escape blame for consistently undermining any potential successor who enjoys public support. If the process of succession deteriorates into chaos and even violence, Abbas will be held accountable.