What do Palestinians think about Egypt's peace initiative?

Hamas leaders are unhappy about the Egyptian initiative, which positions Palestinian President Mahmoud Abbas as Israel's only interlocutor, but fear to express loudly their objections. 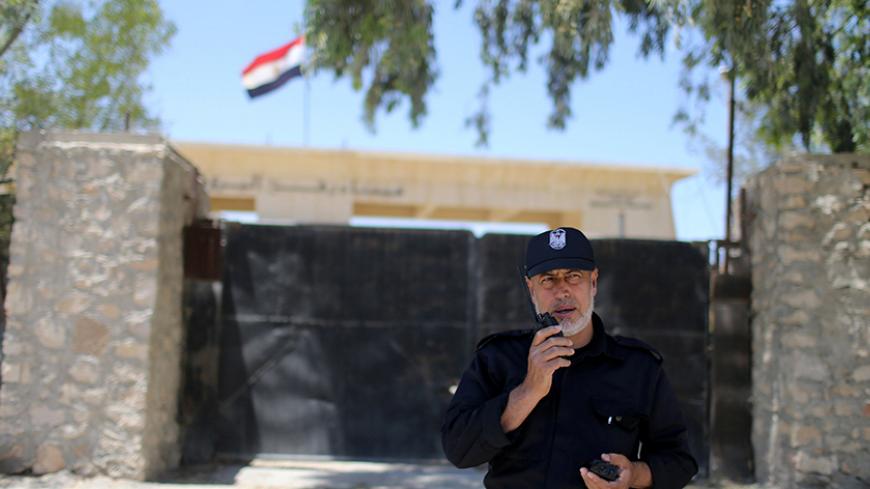 A member of the Palestinian security forces loyal to Hamas speaks on a walkie-talkie at the Rafah border crossing between Egypt and southern Gaza Strip, May 19, 2016. - REUTERS/Ibraheem Abu Mustafa

One day after the first visit in nine years of an Egyptian foreign minister to Israel on July 10, a senior Israeli official told Bloomberg that in recent years Israel has been striking Islamic State (IS) targets in the Sinai Peninsula in coordination with Egypt, and with its blessing. The use of drones in Sinai is directed at IS fighters, which Hamas leaders are keenly aware of. However, they have been careful not to set out against Egyptian President Abdel Fattah al-Sisi concerning the cooperation with Israel, so as not to further exacerbate the already strained relations between them.

The timing of the recent report was no accident. It sought to provide proof to the countries in the region — specifically to the Palestinians in the Gaza Strip and Ramallah — that the relationships between the two countries are closer than ever and that Egypt is resuming its role as the most influential player in the region.

Back in the day, when President Hosni Mubarak was in power, it was Intelligence Minister Omar Suleiman who managed the contacts between the two countries. The fact that it was Egyptian Foreign Minister Sameh Shoukry who visited Israel and not the intelligence minister has far-reaching critical implications for Hamas in Gaza and the Palestinian Authority (PA) in Ramallah. The cooperation between the two countries is no longer restricted to security matters; the relations between them are now also based on joint diplomatic interests.

And this is precisely what worries Hamas the most. The security cooperation between Israel and Egypt in Rafah and Sinai is something the movement feels firsthand on a daily basis. Yet, for the two to have mutual diplomatic interests is a game changer. A diplomatic process led by Sisi, in the framework of the 2002 Arab Initiative, means that the Palestinian key player vis-a-vis whom negotiations will take place is PA President Mahmoud Abbas. Any Hamas resistance to such a diplomatic process could result in greater Egyptian pressure on Gaza, potentially bringing about its collapse.

A day after Shoukry returned to Cairo, Al Arabiya reported that Israeli Prime Minister Benjamin Netanyahu had agreed to a triad summit in Cairo with Abbas. While the prime minister's office did not confirm the report, it did note that Israel was always prepared to hold direct negotiations without preconditions.

Hamas leaders realize that the physical blockade on Gaza is now being compounded by a diplomatic chokehold. Contrary to their expectations, the blockade on Gaza was not lifted in the wake of the June 28 reconciliation agreement between Jerusalem and Ankara. After the agreement went into effect, the Turkish ship Lady Leyla arrived at the port of Ashdod, bringing aid to the Gaza Strip. Draped in Turkish flags, its containers carried medicines, diapers, toys and foodstuffs for the people in Gaza. Still, more than alleviating the dire economic distress in Gaza, the cargo was designed to help Turkey withdraw its demand that Israel lift the blockade as a condition for reconciliation. Hamas leaders, who had their hopes riding on Turkish President Recep Tayyip Erdogan, now realize that he, too, will not be their savior.

At this time, Hamas leaders both in Gaza and abroad, including Hamas political bureau chief Khaled Meshaal, have been maintaining radio silence. Ever since Sisi rose to power, they have been very careful not to come out with statements concerning Egypt. On the one hand, ever since he was nominated in 2014, the Egyptian president has waged an all-out war on the Muslim Brotherhood in Egypt and its Gaza-based Hamas proxy. Unquestionably, he is considered a partial broker who prefers dealing with Abbas to Hamas, hoping for the latter’s collapse. On the other hand, given the disappointment with Turkey and Erdogan, it appears that only Sisi can help Gaza come out of the nine-year-long blockade. If he wants to, he can bring relief to Gaza. But at the same time, he can also — perhaps in collaboration with Israel — ratchet up the blockade.

The only remaining option for Hamas is damage control. As previously reported in Al-Monitor, the movement’s leaders in Gaza view their former Fatah enemy, former Palestinian Security Minister Mohammed Dahlan, as the key to a solution. The excellent ties he has fostered with Sisi and the massive amounts of money he has infused into Gaza through various charity funds have prompted the movement’s leaders in Gaza, including his archrival Mahmoud al-Zahar, to believe that Dahlan is the one who can bring about an agreed-upon Palestinian solution that — as far as they are concerned — will be the lesser evil. This is why senior Hamas leaders Mousa Abu Marzouk and Zahar — the only two leaders holding a dialogue with Cairo — have relayed messages to Egypt to the effect that if Dahlan were to resume a key position in the Palestinian leadership, the obstacles to an internal Palestinian reconciliation and the resumption of PA rule in the Gaza Strip would be removed.

Equally interesting, by contrast, is the reaction of senior Palestinian leaders in Ramallah to the Egyptian initiative and the possibility of a summit meeting in Cairo between Netanyahu and Abbas. Speaking on condition of anonymity, a senior PA official told Al-Monitor that in a meeting that Shoukry held with Abbas after his meeting with Netanyahu, the PA president did not present any preconditions for such a tete-a-tete. Though fully aware of Sisi’s clout and influence, what PA officials really want is to use the Egyptian track in order to expose Netanyahu’s true colors. Before the planned meeting in Cairo made the news, a Palestinian security source told Al-Monitor that Netanyahu always says “aye” in public, yet is opposed to any move that could promote a solution. According to him, before long the Egyptians will find that out for themselves. ​