Will Egypt's warming ties with Israel leave Palestinians out in the cold?

Egyptian-Palestinian relations are tense after the rapprochement between Egypt and Israel as questions arise about the future of Egypt’s role in the Palestinian cause. 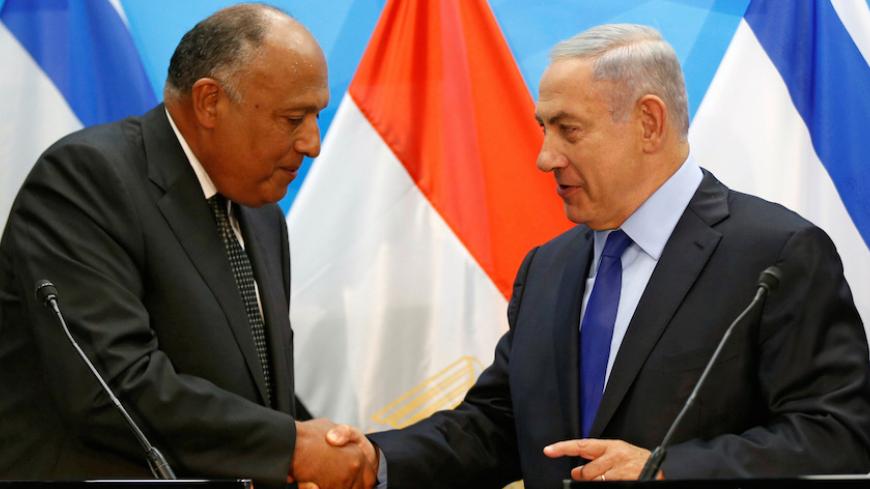 Relations between the Palestinian Authority and Egypt are strained as political differences continue. The PA is less than enthusiastic about Egypt’s peace initiative with Israel and also rejects Cairo’s support for dismissed Fatah leader Mohammed Dahlan.

The chill in Palestinian-Egyptian relations was evident following the PA's late-July request that Egypt convene an Arab League summit in Cairo to discuss the issue of Israeli settlements and to set a date to present the PA's case to the United Nations Security Council. Egypt ultimately rejected the request without explanation and the summit was never held.

In a July 28 article for the Jerusalem Center for Public Affairs, former Israeli intelligence officer Yoni Ben-Menachem predicted that relations between the PA and Egypt will only get worse, as Palestinian President Mahmoud Abbas rejects the Egyptian peace initiative while Cairo paves the way to have Dahlan succeed Abbas.

Relations between Abbas and Dahlan were cut when Dahlan was dismissed as a Fatah leader in May 2011 because of pressure from Abbas. Egyptian President Abdel Fattah el-Sisi, who favors Dahlan, pressured Abbas in November 2015 to reconcile with Dahlan in a bid to return Dahlan to the Palestinian scene at the expense of Abbas.

Ben-Menachem also wrote that the peace initiative introduced by Sisi in May undermines Abbas’ efforts to hold Israel accountable in international venues and bolster the global boycott against it. The Egyptian initiative calls for both Palestinians and Israelis to resume negotiations without preconditions, which would hinder Abbas’ efforts to push the UN and the Security Council to issue resolutions against Israel.

Yet the secretary-general of Fatah’s Revolutionary Council, Amin Makboul, told Al-Monitor, “Relations between Palestine and Egypt are strong and solid. President Abbas’ latest visit to Cairo on May 9 was a success, as discussions held with Sisi dealt with all common interests regarding the Palestinian cause. There is no conflict between the Egyptian and French initiatives, with Egypt endorsing the international conference [the French initiative calls for]. Also, talk about Egyptian support for Dahlan is but unfounded hearsay.”

So far no date has been set for an international peace conference between Palestinians and Israelis. Palestinians favor the idea, while Israelis prefer a conference that Arab and regional states attend without directly participating in.

Makboul’s statement may be diplomatic in nature and aim to prevent further deterioration of Ramallah’s relationship with Cairo. But the latest communiqué, issued Aug. 7 by the PLO Executive Committee, was more explicit when it proclaimed its endorsement of the French initiative without any mention of the Egyptian one — a clear indication that Palestinians do not back the latter. The French initiative calls for an international peace conference and refers the Palestinian cause back to the UN, which Israel rejects.

“It is clear that the differences between the Palestinian and Egyptian sides are due to their respective incongruent interests," Abdel Sattar Qassem, a political science professor at An-Najah University in Nablus, told Al-Monitor. "Egypt backs Dahlan because it needs financial support from the United Arab Emirates in light of [Egypt’s] financial crisis, while the UAE considers Dahlan to be one of its proteges in the region. This angers [Abbas].”

It should be noted that there are strong ties between the UAE and Dahlan, who found refuge there in 2011 after his dismissal from Fatah. As the security adviser of the UAE’s Crown Prince Sheikh Mohammed bin Zayed Al Nahyan, Dahlan is considered an active player in determining internal and external security policies for the UAE. Dahlan was able to establish security relations on the regional and international levels when he was head of Palestinian Preventive Security intelligence between 1994 and 2000, and as the Palestinian national security adviser.

“This chilled state of affairs between Egypt and the PA also coincided with a steady rapprochement between Cairo and Tel Aviv, as Sisi is looking to protect his regime. And one of the tools available in the region toward that end is Israel, which enjoys security potential and has tight political relations with some world powers. [This rapprochement] will eventually lead to the waning of Egypt’s role and status among Palestinians.”

The warming relations between Egypt and Israel have been marked by the return of Egypt's ambassador to Tel Aviv early this year, followed by Egyptian Foreign Minister Sameh Shoukry’s visit to Israel in July. Meanwhile, security and military cooperation between both countries has been increasing to fight jihadist Islamic groups in Sinai, and both countries share hostility against Hamas.

Also worthy of note are the July 29 statements made by an anonymous Fatah official to New Khalij about Arab mediation efforts, the latest of which took place in Jordan, aimed at improving relations between Abbas and Sisi. The efforts ultimately failed.

Although there is no accurate information on the mediation that took place in Jordan, British reporter David Hearst said in a July 27 report on Middle East Eye that the UAE, Egypt and Jordan are planning for the post-Abbas period and paving the way for Dahlan to replace Abbas.

While the relationship between Egypt and the PA is characterized by a lack of empathy, the relationship between Cairo and Hamas remains tense. On July 6, Egypt canceled the visit by a Hamas leadership delegation scheduled for early July, reportedly because Cairo was dissatisfied with Hamas’ response to Egyptian concerns about the deteriorating security situation in Sinai. Hamas had refused to hand over wanted Egyptian citizens Egypt says are in Gaza and active in armed organizations in Sinai. Hamas also refused to form a joint security commission with Cairo to fight terrorism in Sinai.

Although Hamas deployed additional troops in April along the border with Egypt to prevent smuggling between Gaza and Sinai, Egyptian intelligence services found those measures lacking.

Yahya Moussa, Hamas leader and chairman of the Oversight Committee of the Palestinian Legislative Council, told Al-Monitor, “Any tension in the relations of Palestinians with any other party, in particular Egypt, serves Israeli interests. Israel is the ultimate beneficiary, as it will take advantage of the Palestinians’ tense relations with their Arab neighbors to escalate against them in the absence of Arab support.”

Moussa added, “Meanwhile, the PA fails to exploit against Israel any agreement between [the PA] and Egypt. In contrast, the improving relations between Egypt and Israel indicate weakness and confusion on the part of Egypt with regard to regional sovereign issues, for they render Egypt ineffectual despite its relations with Israel growing stronger.”

Egyptians and Palestinians are perhaps seeking to maintain the appearance of good relations but unable to hide their differences concerning Israel, the issue of PA presidential succession and the future of relations with the Gaza Strip. All these issues are enough to keep matters tense between them, while maintaining a modicum of contact and preventing matters from deteriorating to complete estrangement.