Hamas focused on ending the blockade

Hamas repeats the same strategy of violent demonstrations that it has used before in order to put pressure on Israel and Egypt to ease the Gaza blockade. 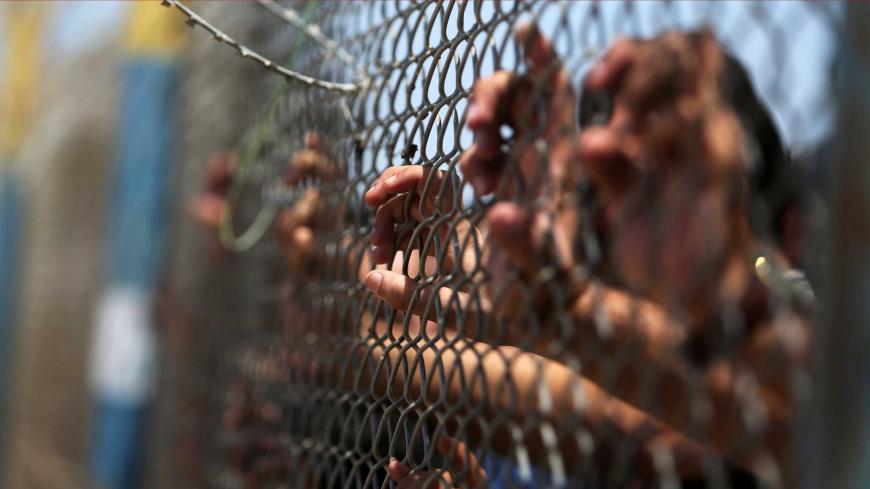 Palestinians gather in front of the gate of Rafah border crossing between Egypt and Gaza during a protest against the blockade calling for reopening of the crossing, in the southern Gaza Strip, July 3, 2017. - REUTERS/Ibraheem Abu Mustafa

Hamas is awaiting developments. As far as it is concerned, the “border operation” it mounted this week against Israel with tens of thousands of Gaza residents storming the fence was successful; the eyes of the world are directed once again at the Gaza Strip after a long hiatus of disinterest.

Hamas is seeking, obviously, to end the blockade imposed by Israel on Gaza in 2007, and it is operating in accordance with a familiar modus operandi honed over more than a decade. The first stage is to put out feelers to see whether Israel is willing to discuss a long-term cease-fire. When Israel turns them down, Hamas launches a second, violent stage, in a bid to bring Israel to the negotiating table to discuss a deal it failed to achieve with its initial, conciliatory moves.

Following the 2007 coup by Izz ad-Din al-Qassam Brigades, the Hamas military arm, and its ousting of the Fatah movement that had ruled the Gaza Strip, Hamas was left with responsibility for the lives of Gaza’s residents, who currently number some 2 million. Then-Prime Minister Ehud Olmert rejected Hamas proposals for a cease-fire in return for an opening of the border crossings. At that point, Hamas began lobbing rockets at Israel in a bid to draw Israel into Egyptian-mediated negotiations, promising a truce in return for an easing of the blockade.

This went on for 10 years. Each round of violence with Gaza, including three major military operations codenamed Cast Lead in December 2008, Pillar of Defense in November 2012 and Protective Edge in July 2014, ended in short negotiating sessions in Cairo. Hamas was not interested merely in a cessation of hostilities; it was offering a truce in return for a relaxation of the blockade. The organization wanted to present the Palestinians with a significant achievement justifying the heavy price paid by Gazans.

Hamas succeeded only in expanding the variety of raw materials and foodstuffs Israel allowed into the Gaza Strip, but failed to achieve economic independence for Gaza. While Israel allowed 800 and even 1,000 supply trucks to cross into Gaza daily in 2015, the local purchasing power weakened to such an extent that supply outstripped demand. These days, only 300 supply trucks unload their wares at the Kerem Shalom border goods terminal every day.

Hamas no longer talks about getting Israeli permission to bring additional raw materials and goods into Gaza; it is now focused on restoring local purchasing power through an opening of the border crossings that would allow the passage of goods and people. This is the top priority of the Hamas leadership. As it did in the past, Hamas is offering a long-term cease-fire — known in Arabic as “hudna” — in return for a lifting of the blockade. It conveyed such a proposal to Israel several weeks ago through Egyptian and Qatari channels, but Israel ignored it. Hamas felt it had no choice but to turn to violence in order to force Israel to the negotiating table.

On May 14, after 62 Gazans were killed in clashes with Israel and thousands were wounded, it turned out that Israel and Egypt were willing to discuss an easing of the siege, after all. That same night, Israel decided to reopen the Kerem Shalom crossing that it had closed after Palestinian rioters set fire and destroyed equipment and facilities there, and Egypt announced that it was opening the Rafah crossing with Gaza until further notice. Operation Fence had achieved Hamas’ goal. Israel and Egypt understood the severity of the situation and the threats it posed, and the Gaza crisis drew international attention.

Hamas had planned additional mass protests for May 15, the date on which Palestinians mark Nakba Day commemorating their uprooting when Israel was established in 1948. Instead, Hamas was careful to limit the number of protesters along the fence. The small presence was intended nonetheless to signal Israel that while the mass protests were halted, they could be renewed at any moment. The Hamas leadership announced that the fence protest would continue in its current form until mid-June, hoping that by then Israel and Egypt would have clarified their intentions and Hamas may be able to present Gazans with an achievement of some sort.

In a May 16 interview with Al Jazeera’s Arabic network, Hamas leader in Gaza Yahya Sinwar said his organization had reached an agreement with Egypt on preventing an escalation of the violence into an all-out military clash with Israel. He added, however, “If Israel causes lots of bloodshed, we will be forced to undertake military resistance.” In other words, a clash has been averted, for now, and would depend on results achieved by Hamas.

A senior Hamas source speaking on condition of anonymity told Al-Monitor, "We have only one plan — to end the Gaza siege. We are not interested in another war and are not threatening to launch one. But the time has come to end this blockade and enable people to live." The source claimed that the cease-fire agreement signed in 2014 after Operation Protective Edge and through Egyptian mediation included understandings designed to rehabilitate the Gaza Strip, like opening crossing points for the import of construction materials and engineering equipment. He also claims that Israel did not hold up its side of the agreement.

The Hamas source added that now, understanding how risky the situation has become, the Egyptians are willing to deal with this issue seriously. In parallel, Egyptian President Abdel Fattah al-Sisi ordered the Rafah crossing between Egypt and the Strip to be left open throughout the Ramadan month. By the time the month of Ramadan finishes, one might hope that Hamas, Egypt and Israel will reach larger understandings.

However, an easing of Israeli and Egyptian restrictions and even foreign donor state allocations for the rehabilitation of the Gaza Strip are unlikely to bring about a significant improvement in the lives of Gazans. The humanitarian crisis is so severe that no ad hoc, temporary remedies such as an opening of the border crossings and additional supplies of food and raw materials can help. What Gaza needs is a comprehensive, significant rehabilitation plan.

Still, such a plan is not feasible unless the Palestinian Authority (PA) returns to Gaza and assumes responsibility for its residents. This, in turn, cannot be achieved absent a reconciliation between Hamas and Palestinian President Mahmoud Abbas. Sinwar has already conceded his organization’s failure to administer life in Gaza, but he and the rest of the leadership are adamant in their refusal to disarm Hamas' military wing — Abbas’ precondition for reconciliation.

Hamas has not given up on the prospects of reconciliation with Fatah and the PA. The high number of Palestinian casualties this past week is yet another tool in its effort to convince Abbas that Hamas cannot give up its "weapons of resistance” and must protect the Palestinians from the Zionist enemy. Adding another pressure point, Hamas Al-Aqsa TV station has been airing a campaign blaming Abbas, too, for the killing of his Palestinian people. Abbas, for those who have forgotten, was the one who imposed sanctions on Gaza that deeply exacerbated the plight of its residents. As far as Hamas is concerned, there is only one way for him to apologize and ask their forgiveness: Lift the sanctions, pay the salaries he withheld from local officials and act like the leader of all Palestinians, not just those under the PA’s rule in the West Bank. In other words, he must quickly assume responsibility for life in the Gaza Strip, without preconditions.