What's behind Hamas' offer of cease-fire to Israel?

Paradoxically, Israel has become Hamas’ only option to save the movement and the Gaza Strip from total collapse. 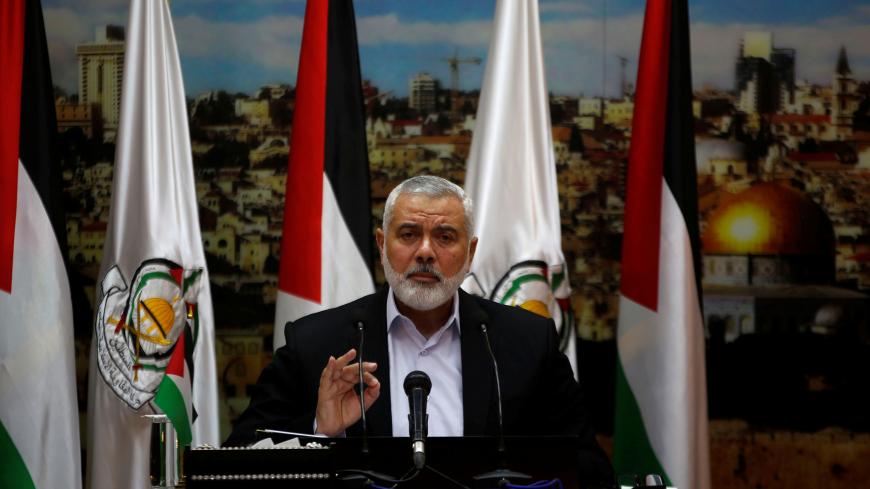 The Hamas leadership in the Gaza Strip recently suggested holding indirect negotiations with Israel regarding a long-term cease-fire — known in Arabic as a “hudna” — Haaretz reported. According to the May 6 report, Hamas used various channels to convey the message on several occasions in recent months.

Two days later, Hamas' military wing — the Izz ad-Din al-Qassam Brigades — tweeted a denial in Hebrew, saying, “Hamas denies reports of a long-term cease-fire with the Zionist occupation.” Nonetheless, a Hamas source confirmed to Al-Monitor that such a proposal exists, similar to the one it had conveyed at the end of the 2014 Israel-Gaza war codenamed Operation Protective Edge. The source, who spoke on condition of anonymity, said the 2014 proposal was amended in light of the changed circumstances, but declined to elaborate. Hamas has never made a secret of the fact that its leadership would adopt “significant decisions” if Israel were to lift the siege it imposed on Gaza in 2007, the source added.

The recent failure of the reconciliation talks with the rival Fatah movement and the Palestinian Authority (PA) that runs the West Bank dashed Hamas' hopes of easing the economic crisis in Gaza. Palestinian President Mahmoud Abbas officially “buried” the reconciliation in a harsh speech he delivered after the failed March 13 assassination attempt against Palestinian Prime Minister Rami Hamdallah and PA intelligence chief Majid Faraj in Gaza.

Meanwhile, the economic situation in the Strip continues to decline. Hamas leaders’ hopes that Egypt would open its Rafah border crossing with Gaza and thereby ease the effects of the siege are no longer relevant. Egypt had urged the two major Palestinian movements to end their protracted conflict as a condition to opening the crossing. It is currently unwilling to budge from the terms of reconciliation and the demand that PA forces assume control of the Gaza border crossing. This stance by Cairo obviously expresses its distrust in Hamas, and the organization’s leadership fully realizes that.

Paradoxically, Israel remains the only default option — the only lifeline left to Hamas. Only Israel can save Hamas and the Gaza Strip it rules from a total system collapse. According to Haaretz defense affairs analyst Amos Harel, the Hamas leadership is suggesting a significant relaxation of the Israeli siege as part of the hudna deal, as well as Israeli approval of major infrastructure projects in Gaza and probably an exchange of prisoners and return of Israeli soldiers’ bodies.

“We said so clearly more than once and not in any secret talks that if the siege is lifted from Gaza, we are willing to discuss a cease-fire — all the [Palestinian] factions are willing to discuss it,” the Hamas source told Al-Monitor. He confirmed that Egypt has served as a conduit for messages between the sides involved “because it places supreme importance on finding a worthy humanitarian solution for the residents of Gaza.”

This is not the first hudna Hamas has offered Israel. The first was conveyed in 1997 by then-King Hussein of Jordan, but Israel did not respond. Former Mossad agency chief Efraim Halevy found out about it (ex post facto) when he went to Jordan that year to handle the fallout from Israel’s attempted assassination of Hamas leader Khaled Meshaal. In his book “Man in the Shadows,” Halevy writes that he first heard the suggestion from the monarch, who wondered why Israel had failed to respond.

In 2005, a European intermediary conveyed another hudna proposal via then-Shin Bet head Yuval Diskin. The document was headlined, “Offer of a reconciliation agreement between Hamas and Israel” and was addressed to Ehud Olmert, Israel’s prime minister at the time. Israel did not respond to this deal, the existence of which I revealed in my 2012 book, “Getting to Know Hamas.”

Hamas made an additional attempt, as mentioned, after Operation Protective Edge, but an Israeli defense official told Al-Monitor on condition of anonymity that Israel did not respond either “because there was no reason to conduct a dialogue with a bruised and beaten movement.” Israel would rather maintain its position of deterrence, threatening Hamas with a harsh response should it fire missiles at Israeli targets. Israel regards the Hamas fear of an additional round of violence as a guarantee of the cease-fire deal reached in Cairo in 2014, to which Hamas has studiously adhered for almost four years.

Hamas offers truce deals whenever it runs into serious trouble. In 1997, the movement felt isolated after being left out of the Palestinian institution-building that appeared a preparation for the establishment of a Palestinian state under the terms of the Oslo peace agreements with Israel. In 2005, the hudna suggestion was born of the fear that Israel would continue its policy of taking out the Hamas leadership after it assassinated Hamas founder Sheikh Ahmed Yassin and his successor, Abdel Aziz Rantisi.

The Hamas political leadership has been aware for a while that absent a significant easing of the siege, the organization will no longer be able to run the Strip since the popular protests by desperate residents would not only be directed at Israel but would also turn against Hamas.

One of the main hudna advocates pushing for understandings with Israel is Hamas leader in Gaza Yahya Sinwar, but he too is only suggesting a cease-fire and is unwilling to entertain the idea of disarming Hamas and demilitarizing Gaza. In fact, despite the cease-fire agreed upon after the 2014 Gaza war, Hamas continued to enlarge its army and is trying to rebuild the attack tunnel project. For Hamas, the cease-fire actually means that it is careful not to fire rockets at Israel so that it does not retaliate.

Hamas will quickly discover that the obstacles that eventually derailed reconciliation with Abbas are also those that will prevent any understandings with Israel. Abbas demanded that Hamas give up its weapons as a condition for any deal, and Israel has posed similar conditions in return for a significant easing of its siege. In his vision of Gaza that he presented to reporters at the beginning of the year, Israeli Defense Minister Avigdor Liberman said a disarmed Hamas was a precondition for rehabilitation of the devastated enclave.

The latest Hamas truce proposal is born of weakness. The leadership does not hold any significant bargaining chips that would entice Israel to consider the offer seriously. In other words, the long-term cease-fire proposal that Hamas is presenting does not include disarming its military forces. The violent Palestinian demonstrations along the Gaza border with Israel in recent weeks are a major headache for Israeli security forces, but they do not constitute a substantial security threat to Israel.

Hamas post-2014 is a weak, rundown organization, and the hudna it is now offering has already been in force for nearly four years. The only question is how long the Protective Edge deterrence and the siege of the Gaza Strip can last.