Hamas' recognition of the Israeli borders established in 1967 is part of outgoing political chief Khaled Meshaal's legacy of pragmatism, but Israel won't be easily soothed. 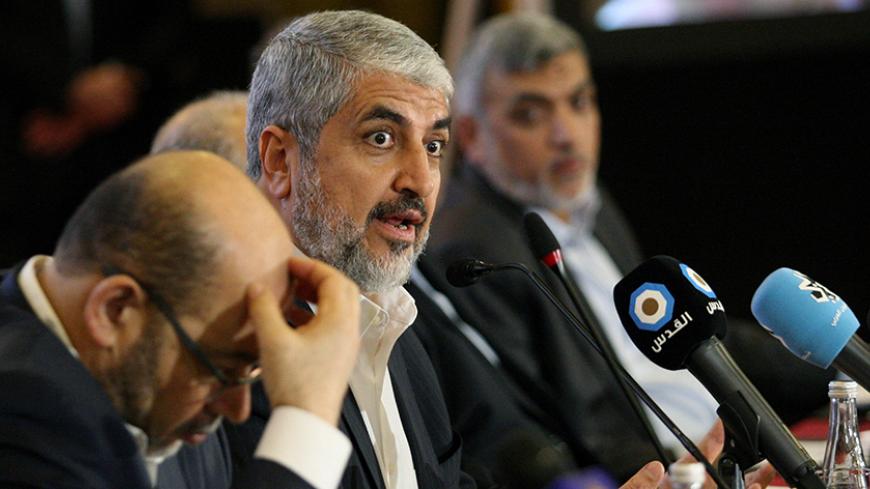 It’s official: The Islamic Resistance Movement (Hamas) announced on May 1 that it recognizes Israel's 1967 borders. This is no trivial matter. The unyielding Hamas charter issued nine months after the movement was founded in 1988 left no room for such a compromise. Sheikh Ahmed Yassin and other members of the founding team clearly delineated the borders of the Islamic Palestinian state they aspired to establish: from the Mediterranean Sea to the Jordan River, including all of Israel and the West Bank. The charter presented the Israeli-Palestinian conflict as a clash between Islam and Jewish heretics. It ruled out any future leeway by designating the land on which Israel was founded as “waqf,” Arabic for “sacred endowment.” It warned that whoever gives it up would be considered a heathen and traitor to the Islamic religion.

Over the years, the movement’s leaders, including Yassin, came to realize that there was a great distance between the founding document and reality on the ground. Although mass rallies in the Gaza Strip ruled by Hamas still echoed with calls for the annihilation of the State of Israel and the establishment of an Islamic one in its place, the leaders knew in their hearts that neither goal was feasible. Israel is a fait accompli, a strong and developed state, and calls for its destruction are an aspiration that cannot come to fruition. Over the years, top Hamas leaders have occasionally tried using back channels to pass along to the “Zionist enemy” messages in direct contravention of the charter.

In his book “Man in the Shadows,” former Mossad head Efraim Halevy wrote that even Yassin wanted to find a loophole in the uncompromising charter that he himself wrote. Halevy recounted that after the failed Israeli attempt on Hamas political bureau chief Khaled Meshaal’s life in 1997 in Jordan, King Hussein asked Halevy why Israel was rejecting a proposal by Yassin — then a prisoner in an Israeli jail — for a long-term cease-fire. Halevy hadn’t known anything about the proposal until that moment because Prime Minister Benjamin Netanyahu had not informed the country’s top defense officials.

The former spy master explained that the decades-old cease-fire initiative, unlike a diplomatic peace agreement, was a sophisticated maneuver designed to circumvent the religious prohibition on compromising over the “waqf” lands and renouncing the jihad against Israel.

In 2005, Meshaal also conveyed to Israel a formal proposal for a diplomatic compromise, and it was sent to then-Shin Bet head Yuval Diskin via a Western intermediary. In my 2012 book “Getting to Know Hamas,” I disclosed a document headed “Peaceful Coexistence” that Meshaal passed on to Diskin in an attempt to convince then-Prime Minister Ehud Olmert to reach an agreement with Hamas. Without formally recognizing Israel, the document suggested a long-term cease-fire and an end to the armed struggle, based on an understanding that the future Palestinian state will be founded along Israel’s 1967 lines.

These attempts continued even after Israel turned the Hamas initiative down. Ghazi Hamad, the former deputy foreign minister in the Hamas government and currently in charge of the power sector in Gaza, admitted in a 2013 interview with Al-Monitor that most of the movement’s leaders had concluded that there was no option other than recognizing the 1967 borders.

In an address delivered in Qatar last week marking the 50th anniversary of the 1967 Six Day War, Meshaal admitted publicly that Hamas was in fact coming down from the tree it had climbed in its charter, and that it was willing to discuss a Palestinian state along the borders that delineated Israel on the eve of that fateful war. Meshaal did not mention a cease-fire, but the very recognition of the 1967 lines is a clear signal to Israel and the international community that the Islamic Resistance Movement is becoming more pragmatic and must be viewed in a different light.

Netanyahu's office issued a statement calling the shift a “smoke screen," saying, "We see Hamas continuing to invest all of its resources not just in preparing for war with Israel, but also in educating the children of Gaza to want to destroy Israel.”

The timing of the unveiling of the Hamas diplomatic program is highly significant. Meshaal is at the end of his political career, after declaring he will not seek re-election for the movement’s leadership. He is outlining new, pragmatic guidelines for his successor, who will likely be former Hamas Prime Minister Ismail Haniyeh.

Meshaal announced the plan on the eve of the scheduled White House meeting between his rival, Palestinian President Mahmoud Abbas, and US President Donald Trump.

Hamas understands that Israel and the Palestinians (through the West Bank PLO leadership) may soon restart their negotiations, and its radical stance could isolate it and threaten its ability to rule the Gaza Strip and cope with its dire economic problems. The sanctions imposed by Abbas on Gaza last month and his plan to dissociate from the enclave are putting the screws to Hamas. And yet, Meshaal’s initiative is still something of an illusion. Hamas' power is at one of the lowest ebbs in its history, and its diplomatic proposal comes from weakness and deep concern for its future. The movement’s leaders may believe that this is a dramatic change in their stance, but given their current situation, no Israeli leader will accept recognition of the 1967 borders unless Hamas spells out recognition of Israel and pledges an end to the armed conflict against it. Hamas' leaders are trying hard to find the middle ground between an unyielding charter and a changing reality, but if they aspire to a viable future, they need to try much harder.