Some factions within Hamas' political leadership think that recognizing Israel might be the only way to relieve the situation of the Gaza Strip and ensure the survival of the Hamas movement. 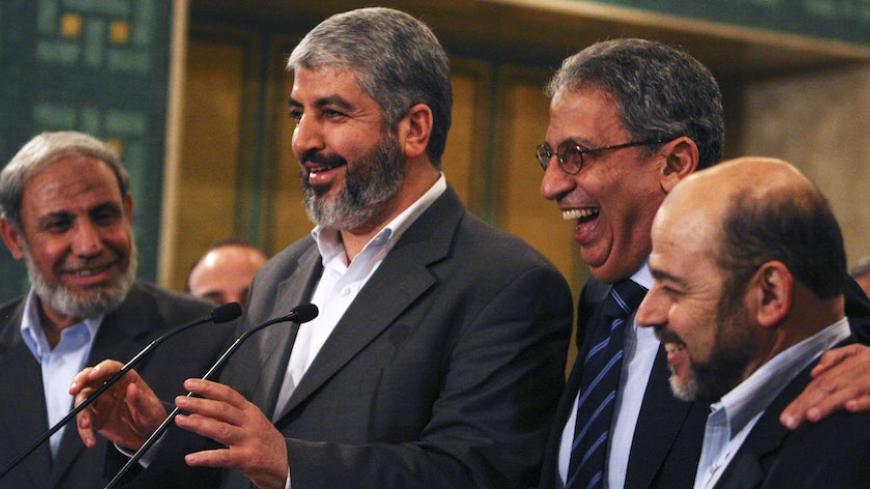 Gaza residents have been telling a macabre joke in recent weeks: Once the Egyptians finish building the huge fishponds they’re planning in Rafah, tens of thousands of tunnel workers will have to take up diving.

Not long ago, Egypt announced that in an effort to stamp out the smuggling enterprise through tunnels from the Sinai Peninsula to the Gaza Strip, it was planning to set up an enormous system of fishponds 14 kilometers (8.7 miles) long. How the ponds will be built, how the large quantities of water will be transferred from el-Arish and when the work will be completed all remain a mystery at this stage. These unknowns aside, the plan’s detractors and the concerned people in Gaza say that the project — if ever implemented — would take so long to complete it would give the tens or hundreds of thousands of unemployed people enough time to find new ways to adapt to the fishponds.

Israel, too, had tried to come up with creative ideas to secure its Egypt-Gaza border, such as a deeply planted steel wall (the Philadelphi Route) or digging a sea canal on the border between the Egyptian side of Gaza and the Palestinian one to make contraband smuggling harder. The canal was never dug, and Gaza’s tunnel experts found ingenious ways to overcome the obstacles that had been set up. But this time, it seems the lights have gone out in Rafah’s tunnels.

Until Cairo waged its all-out war against the tunnels that were Gaza’s lifeline, Hamas leaders saw the Saladin Project — the name for the smuggling enterprise from Egypt — as a huge pioneering success, a symbol of the triumphant Palestinian spirit. Thanks to the tunnels, Hamas' leaders were able to hold onto the reins in Gaza despite the hardships. But those times seem to be over. Gaza is shutting down. Though the last eight years have been horrible for its residents, the future appears to be even bleaker.

A report by the United Nations Conference on Trade and Development states that by 2020, Gaza will become uninhabitable. Eight years of blockade and three wars have wreaked havoc on the 1.8 million residents in the Gaza Strip. Published on Sept. 2, the report notes that the unemployment rate has soared to 44% while 72% of households suffer from food insecurity.

This grim forecast has not been lost on Hamas leaders. Although the movement’s senior officials — Ismail Haniyeh, Mahmoud al-Zahar and Qatar-based head of Hamas' political bureau Khaled Meshaal — continue in their statements and speeches to sing their praises for the endurance of Gaza’s residents, it is patently clear that the situation is deteriorating by the day and that no solution is in the offing.

And if Egypt’s fishponds were not enough, the invitation extended to Palestinian President Mahmoud Abbas to visit Iran has been perceived by Hamas leaders as a resounding slap in the face of those who until three years ago had been the movement’s chief patrons.

The messages exchanged between Israel and Hamas about a long-term cease-fire, with the hope that it would end the blockade on Gaza, have yet to show any results. More precisely, they have never gotten off the ground.

The position of the leaders of the Izz ad-Din al-Qassam Brigades, the movement’s military wing, is well known: They seek to continue its buildup. Most of the financial resources for salaries and the development of locally made weaponry come from Muslim charities that have been contributing to Hamas for years. The military wing operates almost completely separately from the rest of the movement. The debate over the movement’s future takes place primarily within the political wing’s various factions and camps.

Hamas’ political leadership is divided. Bitter arguments have been taking place for years, but they have become even more vigorous in recent months. Unlike in the past, when a distinction was drawn between Hamas’ hawkish and pragmatic camps as well as between the leadership in Gaza and the one abroad, the divisions go deeper. Due to the immense pressure on the leadership, the movement has split into different camps and factions with only one topic preoccupying its leaders: How can the movement survive?

Al-Monitor has learned that one of the camps, which consists of a number of leaders who were once considered the pragmatic stream, believes it is high time to think seriously about the conditions of the Quartet — the European Union, Russia, the United Nations and the United States — relating to the mutual recognition between Israel and Hamas. Speaking on condition of anonymity, a source in the movement told Al-Monitor that the issue of mutual recognition has come up in the series of messages that Israel and Hamas have been exchanging in recent months in consideration of a long-term cease-fire.

This does not mean acceptance of the Quartet’s conditions to the letter; nor does it mean giving Israel the right to Palestinian land. Rather, there is vague wording about recognizing the right of coexistence but without giving up the rights over Palestinian lands held for generations.

The demand for it to recognize Israel as a condition for opening up Gaza to the world was raised by former British Prime Minister Tony Blair — the Quartet’s former envoy to the Middle East — during his visit to the Gaza Strip in February of this year. In his meeting with the movement’s leaders, including Deputy Foreign Minister Ghazi Hamad, a demand was made to recognize the principles of a two-state solution. The movement’s leaders, Ismail Haniyeh and Zahar, responded unequivocally, rejecting out of hand the proposals to recognize Israel. But the longer and the tighter the blockade on the Gaza Strip is, the more the idea seeps through.

Al-Monitor has learned that Haniyeh — once considered the leader of the movement’s pragmatic stream — is aware of this keen debate and for the time being has not expressed any objection to the ideas that have been introduced — nor, it should be noted, has he expressed any reservations. Some people in Hamas see Haniyeh’s irresolute position as a positive sign.

Mentioning Haniyeh in the context of possibly recognizing Israel is not insignificant. After Hamas’ victory in the 2006 elections and following the Quartet’s demands that it recognize Israel, accept past agreements and renounce violence, it was Haniyeh who coined the phrase “We will never recognize Israel,” using every possible negation in the Arab language. It seems that even Haniyeh realizes now that the day of reckoning is approaching, given that the other options for survival are nonexistent.

Yet, it should be remembered that pitted against the camp that wants the issue of mutual recognition to be brought for a serious deliberation at the Shura Council is the hawkish camp that believes that Israel only understands the language of force. One of the staunch advocates of a military buildup is Zahar, who also keeps pushing for more attempts to reconcile with Iran.

The debate within Hamas will not end anytime soon. It is hard for people to admit that their policy has failed and their promise was left unfulfilled. The movement’s leaders and activists, who have lived their entire lives on the notion of destroying Israel, cannot change overnight. But the debate that is now taking place within the movement is indicative of Hamas’ distress and deep crisis.