Senior Hamas official Mahmoud al-Zahar's objection to recognizing Israel's 1967 borders as the basis for the creation of a future Palestinian state puts him at odds with the movement's new leadership. 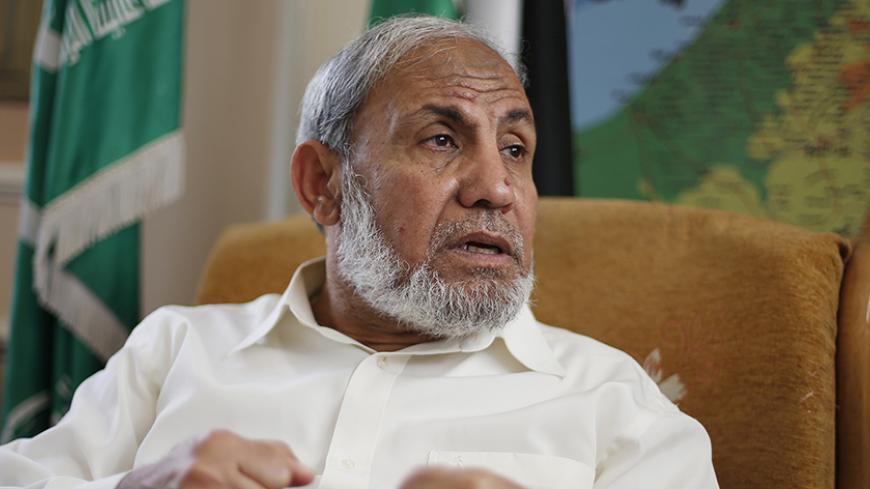 Veteran Hamas strategist Mahmoud al-Zahar gestures during an interview with Reuters at his house in Gaza City, Gaza Strip, April 29, 2014.

Mahmoud al-Zahar, a senior Hamas leader in the Gaza Strip, is denying reports by the Watan 24 news agency and the Egyptian Al-Youm Al-Sabeh newspaper that he has resigned from Hamas’ political bureau after the election of Ismail Haniyeh as the movement's leader. “It’s yellow journalism,” said Zahar in a reply sent to the Palestinian and Egyptian news operations. Zahar claimed that the allegations were Israeli propaganda aimed at undercutting Hamas’ leadership. In another published response, Zahar even claimed that Fatah was spreading false rumors about him.

However, Al-Monitor has learned that the results of the political bureau election have created a deep rift within the movement. Palestinian sources in Gaza and a security source in Israel following Hamas' leadership changes confirm that Zahar threatened to resign but changed his mind after being pressured by hawkish members of the political and military leaderships. According to the sources, they were able to convince Zahar that only from within the movement’s leadership could he act effectively to stop the process of moderation it is undergoing following Haniyeh’s election and to nullify the changes in policy announced this month by former political bureau chief Khaled Meshaal.

On May 14 at the 11th Conference to Maintain the National Principles in Gaza, Zahar gave a broad hint about the rift and his dissatisfaction with the new winds blowing in the movement. He publicly warned Haniyeh and the pragmatic branch of the movement, without mentioning them directly, that they should not adopt the shift that Meshaal had announced on the eve of his resignation from the office, according to which Hamas would recognize the 1967 borders as the future borders of the Palestinian state.

“Hamas will never put down its arms and will never give up its principles,” Zahar declared. He also delivered a sting to the Hamas elected leadership and that of the Palestinian Authority (PA): “Whoever thinks that the nations of the West or the East [i.e., the pragmatic Arab nations pressuring Hamas to reach an agreement with Israel] will take care of the interests or the legitimate rights of the Palestinian people is suffering from delusions that could lead to a new catastrophe.” According to Zahar, no one but Hamas will look out for the interests and rights of the Palestinian people.

Processes in Hamas, like the movement's internal struggles, are usually kept secret to maintain the image of a united leadership, but the current rift, which began years ago with differences between Zahar and Meshaal, was always out in the open. In the 2012 political bureau elections, Meshaal did all he could to prevent Zahar from becoming a bureau member. Zahar ultimately succeed in getting elected, but with great effort and the involvement of military wing activists.

Like other movement leaders, Zahar knows that the issuing of reforms was conducted in consultation with Haniyeh before he assumed leadership of the political bureau. As previously reported in Al-Monitor, the goal was for Meshaal, as outgoing leader, to pave a seemingly moderate path for Haniyeh, so that his successor could not be accused of capitulation or obsequiousness to Israel by the hawkish wing of the movement. Zahar saw the process as a conspiracy.

Zahar is considered the leader of Hamas' hawkish branch in Gaza. He butted heads with Meshaal on a number of decisions the outgoing leader made over the years, beginning with the choice of Qatar rather than Iran as the movement's patron and ending with too moderate an approach toward the PA to his taste.

Zahar maintained good relations with Iranian leaders even after the rift between the movement and Tehran following the outbreak of the Syrian civil war and the decision of Hamas' political wing to abandon Damascus to set up shop in Qatar. Iran recently reduced its political and economic support, which had significantly increased since the second intifada in 2000. Zahar kept an open line of communication with Tehran and received funds from it that went mostly to his camp in the movement. His threats to resign were also threats to stop the support from Iran to Hamas that he had succeeded in maintaining.

A security source with the PA told Al-Monitor that there is no doubt that Zahar is expressing not only his own disapproval with the changes in the movement, but also Iran’s dissatisfaction with them, including Hamas’ willingness to recognize the 1967 borders. According to the source, who spoke on condition of anonymity, Zahar realizes that he cannot maintain an open line with Iran while his movement talks about relinquishing Palestinian land. “That seems to be the reason for his public efforts to diminish the importance of the reforms,” the source said. Two days after the publication of Meshaal’s policy documents and the announcement of the political bureau election results, Zahar claimed that there are no changes in Hamas’ positions or its founding charter.

The political bureau elections have created a rift along clear lines. The hawkish wing includes, in addition to Zahar, Gaza-based Fathi Hamad, Khalil al-Hayya and Yahya Sinwar and from outside Gaza Salah al-Arouri. Meanwhile, the (relatively) pragmatic wing includes Haniyeh, Ghazi Hamad and Mousa Abu Marzouk. This latest conflict shows that only some members of the movement’s political leadership think that Hamas needs to be flexible to hold on to its power and to adjust to the difficult straits in which it finds itself. In reality, Haniyeh’s hands are tied vis-a-vis the opposing camp. There is thus zero chance that Hamas will recognize the 1967 borders as a real diplomatic option.