Qatar or Iran: Who will save Hamas?

The Hamas delegation will split forces after performing the hajj in Mecca, with Ismail Haniyeh heading to Qatar and Mahmoud al-Zahar visiting Iran. 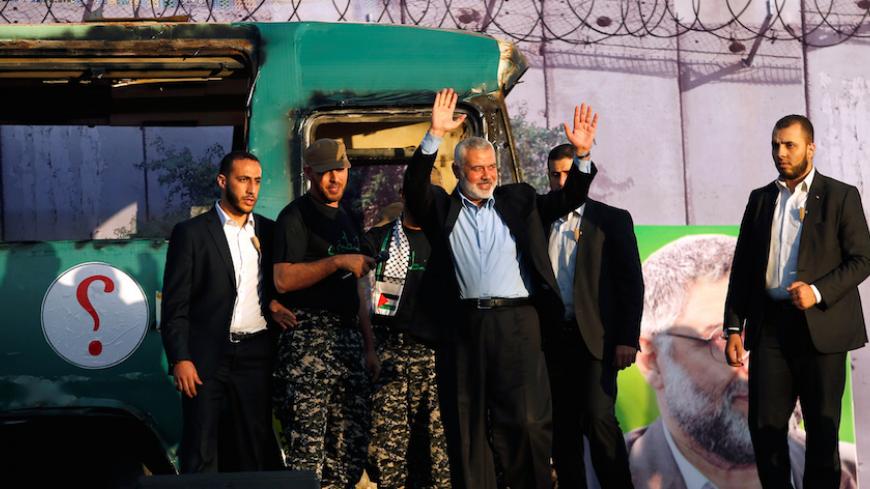 Palestinian Hamas leader in Gaza Ismail Haniyeh waves to his supporters during an anti-Israeli rally in Gaza City, April 28, 2016.

The top Hamas leaders in the Gaza Strip, Ismail Haniyeh and Mahmoud al-Zahar, left Gaza on Sept. 3 for the airport in Cairo through the Rafah border crossing, accompanied by a large delegation of some 50 Hamas officials. This appears to be the largest group of officials, activists and bodyguards ever to leave Gaza as a group. Haniyeh’s family members joined the delegation, too. Ahmad Bahar, a senior veteran Hamas official and the first deputy speaker of the Palestinian Legislative Council, was supposed to join the group, but sources in Gaza told Al-Monitor that Egypt refused to grant him a travel permit at the border and he was forced to return home.

The Egyptians closely scrutinized every name on the list submitted by the Hamas leadership, and all members of the delegation were required to undergo extensive security checks at the border. From there, they headed for the airport in Cairo and boarded a flight to Riyadh, Saudi Arabia. At the Rafah border crossing, Hamas officials could see hundreds of Gaza residents — hungry and desperate men, women and children who had left Gaza for medical treatment, as the Egyptian authorities imposed on them difficult procedures for entering the Gaza Strip upon their return.

The departure of the Hamas delegation is additional proof of the dramatic changes underway that will determine the movement’s direction and future.

Haniyeh was joined by his wife and three of his youngest children. His son Abed, considered to wield significant influence within Hamas, stayed behind to look after his father’s interests and maintain his link with the Gaza security forces in his absence. As Al-Monitor reported in June, from the moment the head of the Hamas political bureau, Khaled Meshaal, announced that he would not seek re-election in the upcoming balloting for the movement’s leadership, the road was paved for Haniyeh’s succession. No one else has dared run against him, not even Hamas senior Mousa Abu Marzouk, who established the political bureau and saved it from annihilation at least twice in the past.

Elections for the movement’s leadership will be held at the end of the year, but Haniyeh is planning to relocate with his family and close associates to Qatar, from where he will conduct Hamas' affairs in the coming, most critical months in the movement's history.

It is not yet clear whether he plans to follow in the footsteps of Meshaal, who moved to Doha permanently after escaping from Damascus in 2012, or only to stay there through the election process, until he is officially declared the movement’s leader and the outgoing leadership hands over the reins. Meshaal has headed the political bureau and steered it since 1996.

Upon arrival in Qatar, members of the delegation will be invited for a welcoming meeting with Qatar's Emir Sheikh Tamim bin Hamad Al Thani, who has enabled the Hamas political bureau to operate from his country. But the important point is that by moving to Qatar for the next few months, Haniyeh will be able to come and go as he pleases — contrary to his situation in the Gaza Strip. Thus, he will be able to manage freely the bureau and engage in the campaign to raise money for Hamas in those countries ready to accept him.

The delegation’s first stop is Saudi Arabia, where they will fulfill their hajj duty in the holy city of Mecca. The planned pilgrimage enabled the Hamas delegation to get Egypt’s permission to leave Gaza with relative ease. Not all the delegation members will then head for Qatar; Zahar intends to travel to Tehran and meet Iran’s top spiritual leader, Supreme Leader Ayatollah Ali Khamenei. While Meshaal has in recent years been a persona non grata in Iran, and all attempts at reconciliation between the sides failed, Zahar is the only one among the top Hamas officials to have maintained ties with Iran.

The future direction of Hamas will be determined in Doha and Tehran. If Zahar succeeds in appeasing Iran, mending the deep schism created by Meshaal between Hamas and Iran and getting Khamenei’s blessing, the movement’s leadership can breathe easy and hope for the removal of the stranglehold crippling it in recent years, especially in financial terms. A tightening of the ties with Iran would invariably lead to the loss of Saudi support and restore Hamas’ former obligation to take its marching orders from Iran.

The military arm of Hamas has long been pressing the movement’s leadership to reconcile with Tehran as the only way to strengthen the organization with weapons and military equipment and to prepare it for a possible military confrontation with Israel.

If Iran sends Zahar away with polite words, and does not restore the relationship and the extent of its aid to previous levels, before the crisis between the sides, the burden will fall on Haniyeh’s shoulders. Sources in Gaza believe this is the reason Haniyeh left for Qatar at this time, well before the elections. He wants to put out feelers to all the Arab states to open up new channels of aid, including from Muslim foundations around the world.

Haniyeh and Zahar are two arrowheads heading in separate directions. The direction that yields the most impressive results will dictate Hamas’ future moves. In the event the movement fails in its efforts to substantially increase aid from Iran and Qatar, Haniyeh and Zahar will be forced to adopt a third, least preferable option: reconciliation with the Fatah movement and Palestinian President Mahmoud Abbas.

If Hamas is forced to turn to the Palestinian Authority (PA) for help, it will have to cede partial control of the Gaza Strip. This is one of the reasons why senior Fatah officials believe Hamas wants the PA to win many municipal districts in Gaza in the upcoming local elections slated for Oct. 8. Hamas leaders understand, as Al-Monitor reported recently, that the presence in Gaza of Fatah heads of councils could encourage the European Union to resume the infusion of money to Gaza. Now it seems that Hamas also hopes that such a presence will open up a window for Fatah-Hamas reconciliation.

The Hamas delegation has left on a critical mission to save the movement. If its leaders know how to read the map of tensions and different interests of various Arab state blocs, and to draw relevant conclusions for their movement’s future, they also know there is not much reason to be optimistic.