Israel should be wary of Hamas' truce proposal

The dire situation in Gaza has apparently prompted Hamas' political leaders to offer Israel a long-term cease-fire, but the dominance of the movement's military wing casts doubt on such a truce holding. 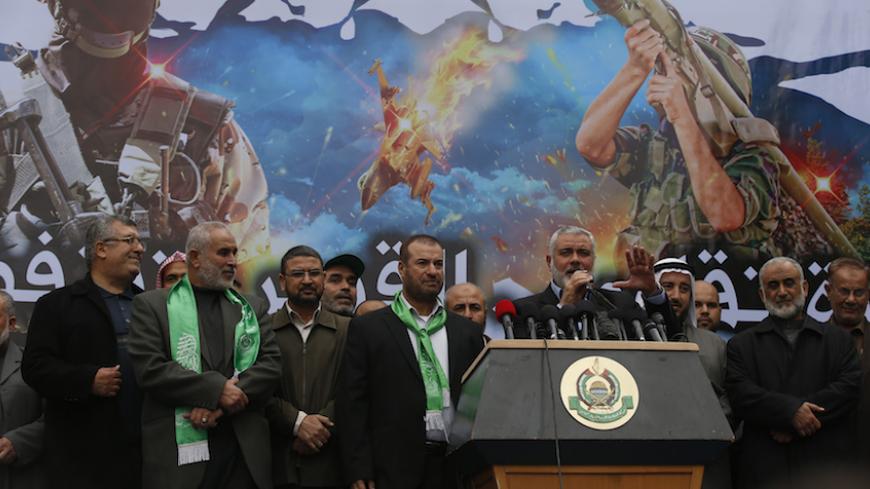 Senior Hamas leader Ismail Haniyeh (5th R) gives a speech during a rally ahead of the 27th anniversary of Hamas' founding, in Jabaliya in the northern Gaza Strip, Dec. 12, 2014. - REUTERS/Mohammed Salem

The Israeli public is not the only group awaiting the election results for the 20th Knesset. Hamas is also in suspense over the results. Previously when it came to Israeli election campaigns, Hamas’ spokesmen always said that it made no difference to them who would be elected to lead the “Zionist enemy.” Times, however, have changed, and Hamas' leaders are begging for help.

The living conditions in Gaza are incredibly severe, in fact, worse than ever; the reports emerging from the Gaza Strip are appalling. In the meantime, Hamas leaders await to learn the composition of Israel's next government to try to determine which policy it will adopt toward the movement.

In contrast to Israeli citizens, who will vote on March 17, the residents of Gaza, suffering under the Hamas regime after it won elections in 2006 and later seized control, do not have the basic right to choose between re-electing or rejecting the movement that has led them to the edge of the abyss. Although Hamas was chosen in democratic elections, it subsequently trampled every possible vestige of democracy in the Palestinian system. Now it seeks a magic solution that will enable the movement to continue to rule, and in effect survive. Hamas well understands that if there is not a dramatic change in the situation in Gaza, it will likely not manage to hang on much longer.

Hamas knows that salvation will not come from Egypt, because Cairo has declared Hamas to be a terror organization. Even Palestinian Authority (PA) President Mahmoud Abbas, who at times seemed ready to offer Hamas life support, recently has not lifted a finger. In fact, Abbas has distanced himself from Gaza to the extent that at the end of February, five major European Union countries — France, Germany, Great Britain, Italy and Spain — protested to senior officials in Ramallah that the PA is not doing enough to advance the reconstruction of Gaza, as the situation continues to deteriorate by the day.

Even previously generous donations from Qatar and Iran have almost completely stopped, so now Gaza must primarily rely on Israeli goodwill. Maj. Gen. Yoav "Poly" Mordechai, coordinator of government activities in the territories, is conducting a wise, humanitarian policy toward Gaza. During the first week of March, it was revealed that Mordechai had given authorization for Gaza farmers to supply agricultural produce for Israeli consumption during the Jewish Shmita year (a time when some Israeli farmlands are left fallow, this year until September). Mordechai acknowledged that the hardship Gaza residents are experiencing was the driving force behind the decision.

Hamas did not block the initiative, because the leadership is well aware of the great crisis affecting the population and the dangers it faces if the border crossings with Israel remain closed. On the Walla news site, commentator Avi Issacharoff revealed March 9 that movement leaders had recently relayed a series of messages to Israel in which they expressed their interest in a long-term cease-fire deal, to remain in effect for several years, in exchange for lifting the blockade on Gaza.

Swiss Consul Paul Garnier had visited Gaza about a month ago and met some of the organization’s leaders, including Mousa Abu Marzouk, Bassem Naim and Ghazi Hamad, among others. In discussions with other European diplomats, Hamas leaders confirmed their organization would cease military activities, above and below ground, in exchange for the blockade being lifted. Issacharoff also noted a senior Hamas official's acknowledgment of the movement's awareness that no action would be taken before the Israeli elections.

A long-term cease-fire proposal ("hudna") is not a new idea among the movement’s leaders. I revealed in my book “To Know Hamas” (in Hebrew, 2012) that after the movement was elected in 2006 to run the PA, the Quartet confronted it with the demand that it recognize Israel in exchange for removing the organization from a list of terror organizations. As a result, a secret proposal for peaceful coexistence was submitted to Israel in which Hamas agreed to fulfill a list of demands, but the proposal died the day the documents reached Israel via foreign messenger.

Hamas’ military wing, headed by Ahmed Jabari (who was killed by Israel in November 2012 at the beginning of Operation Pillar of Defense), took the initiative into its own hands and stirred the political leaders' diplomatic initiative into a dead end. Members of the military wing were involved in the June 2006 abduction of the Israeli soldier Gilad Shalit.

Hamas, in extremely dire straits and needing to alter its call for jihad against Israel, sent up a “trial balloon” in the form of a proposed hudna, before Israeli elections, to try to hold on to Gaza. These days, however, that is not enough. What might have been viewed as a serious proposal a decade ago now seems insubstantial. Hamas is ruled today, more so than ever, by its military wing rather than its political leadership.

Abu Marzouk, deputy chairman of the Hamas political bureau, Deputy Foreign Minister Ghazi Hamad and even former Prime Minister Ismail Haniyeh — who are considered Hamas’ moderate, pragmatic wing — cannot guarantee that the military wing will not take action on its own, stop playing by the rules and violate the long-term cease-fire Hamas is offering. This has happened in the past with almost all of the understandings reached by Hamas with Israel or the PA. The last example was the June 2014 abduction and murder of three Israeli youths – Gilad Sha’er, Naftali Fraenkel and Eyal Yifrah — three weeks after the establishment of the Palestinian unity government. The killings ultimately led to Operation Protective Edge.

In my assessment, no Israeli leader — not incumbent Prime Minister Benjamin Netanyahu, and not even Zionist Camp leader Isaac Herzog should he be elected — would be willing to open the passages to Gaza merely on the basis of a Hamas promise of a cease-fire. Considering Hamas' current situation, it needs to go the distance and make some far-reaching changes if it wants to save Gaza residents, and itself.

Hamas has only two choices. One is to seriously consider the Quartet's conditions dictated to it after it was elected, namely, stop terror acts, recognize Israel and accept prior agreements. The other option is to reach an agreement with Abbas and hold elections.

Before any sort of lifeboat is offered to the movement, Hamas must dismantle the large, well-armed military force it has established. This is because Abbas is well aware that even if elections were held, and even if he were elected president by a landslide, Hamas' military wing would continue to intimidate him and the residents of Gaza.