Negotiations are ongoing between Hamas and international envoys on a potential 15-year truce with Israel, a plan some Hamas and Fatah figures see as a way to split the Gaza Strip from the West Bank. 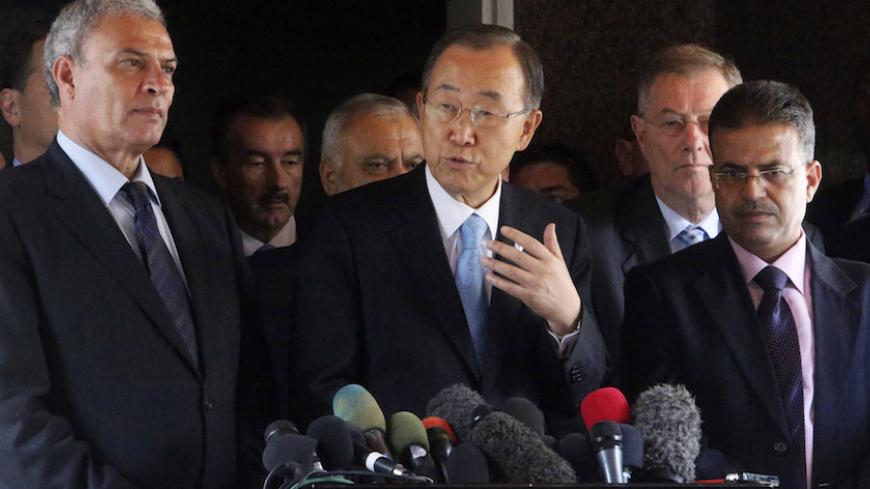 United Nations Secretary-General Ban Ki-moon (C) speaks to the media during his visit to the headquarters of the Palestinian Cabinet in Gaza City, Oct. 14, 2014. - REUTERS/Ibraheem Abu Mustafa

As soon as the war ended in late August 2014, the Gaza Strip became a destination for international envoys wanting to negotiate lifting the siege and opening the border crossings as well as discuss the future of the reconciliation government.

But now a new issue is being raised by international envoys in their meetings with Hamas’ leadership in Gaza: reaching a long-term truce with Israel that could span several years.

Hamas' foreign relations head Bassem Naim told Al-Monitor, “Hamas received various international proposals to discuss the current truce with Israel and extend it for three to five years in exchange for lifting the siege imposed on Gaza, allowing reconstruction and building the sea and air ports.”

The increased tempo of international proposals to extend the truce is coinciding with mounting warnings about a conflagration in Gaza caused by the continued siege, the lack of progress in reconciling with Fatah and the similarity in the security and on-the-ground conditions today, compared with those that preceded the last war in July 2014. Taher al-Nunu, Hamas’ media adviser, told Al-Monitor, “The proposals currently considered complement efforts to bolster the cease-fire with Israel. Hamas will present those proposals to all remaining factions, with whom we shall consult to adopt a unified stance.”

Israeli media outlets published details about the truce proposals on March 11, reporting that Israel and Hamas were considering achieving a 15-year cease-fire, during the first five years of which both sides would undertake to cease all military operations in exchange for lifting the siege and building sea and air ports in Gaza.

But Gaza's Deputy Foreign Minister Ghazi Hamad, one of Hamas’ most prominent negotiators with international envoys, told Al-Monitor, “No practical progress has been achieved with Western diplomatic sources visiting Gaza in relation to the sea and air ports dossier; because Israel refuses to hand Hamas a victory after the last battle.”

In the midst of international contacts with Hamas, the PA warned about Hamas’ unilateral efforts to enter into a long-term truce with Israel as a prelude to splitting the Gaza Strip from the West Bank.

Al-Monitor learned from a Palestinian official with close ties to President Mahmoud Abbas and who refused to reveal his identity that “the PA and Fatah were concerned about a regional plan to split Gaza from the Palestinian territories and sign a truce with Israel without Abbas’ knowledge, to politically marginalize the PA and undermine its powers through a deal calling for reconstruction and appeasement.”

Remarkably, most factions associated with the Palestine Liberation Organization issued a March 12 joint statement warning about the dangers of unilateral negotiations between Hamas and Israel.

However, it has become clear that to the ire of the PA, Gaza — which is besieged over land, sea and air — has become a favorite destination for international politicians seeking to negotiate with the pre-eminent decision-maker in the Gaza Strip: Hamas; which marginalizes the West Bank authority’s role, despite its globally recognized authority.

Hamas responded to those warnings through the deputy head of its political bureau, Ismail Haniyeh, who announced March 23 that Hamas does not object to a five-year truce with Israel as long as it does not mean that the occupation forces would have free reign over the West Bank. Previously, Hamas political bureau member Moussa Abu Marzouk had affirmed March 11 that Israeli truce proposals were not intended to serve Gaza’s interests, but to split it from the West Bank — a plan that Hamas would never allow.

The intra-Palestinian debate about a prospective truce between Hamas and Israel spread through social networking sites, gathering opponents and supporters.

In conjunction with talk about a truce in Gaza, the Izz ad-Din al-Qassam Brigades, Hamas’ military wing, continued operational preparations throughout the past weeks by digging tunnels and test-firing rockets on a daily basis.

A Hamas military official who requested anonymity told Al-Monitor, “High-level coordination was in place between Hamas’ political and military wings to study the truce proposals, which does not interfere with the military responsibilities and continued training of troops, away from any political developments and behind-the-scenes negotiations. The Qassam Brigades have complete trust in the credibility of any decision made by Hamas’ leadership vis-a-vis the ongoing negotiations with international envoys, as this does not interfere with the brigades’ strategic plans relating to the continued development of weaponry, advanced tactics and readiness to confront the inevitable treachery of occupying forces.”

Al-Monitor also followed the unprecedented field trips conducted by top Hamas officials, including Ismail Haniyeh, Mahmoud al-Zahar and Fathi Hamad, during the first week of April along Gaza’s eastern border, mere meters from Israeli settlements; in a signal to Israel that the truce negotiations have not impeded Hamas’ ambitions to liberate all remaining Palestinian lands.

Lastly, Hamas is well aware that the catastrophic conditions in Gaza necessitate that the status quo be broken, because their unchecked progression would lead to a new devastating war with Israel, which Hamas wants to avoid.

Yet, Hamas seeks a truce agreement that gives the impression that it achieved some of the demands made during the last war; particularly the building of a seaport, to allay the frustration felt by Palestinians throughout the eight months since the war’s end. No stated demands were in fact attained, despite the casualties and losses that have yet to be redressed.