Is there hope for long-term truce between Hamas, Israel?

There is talk about implementing the initiative proposed by UN special coordinator Robert Serry to impose a long-term truce between Hamas and Israel, in return of ending the Israeli siege imposed on the Gaza Strip since 2007. 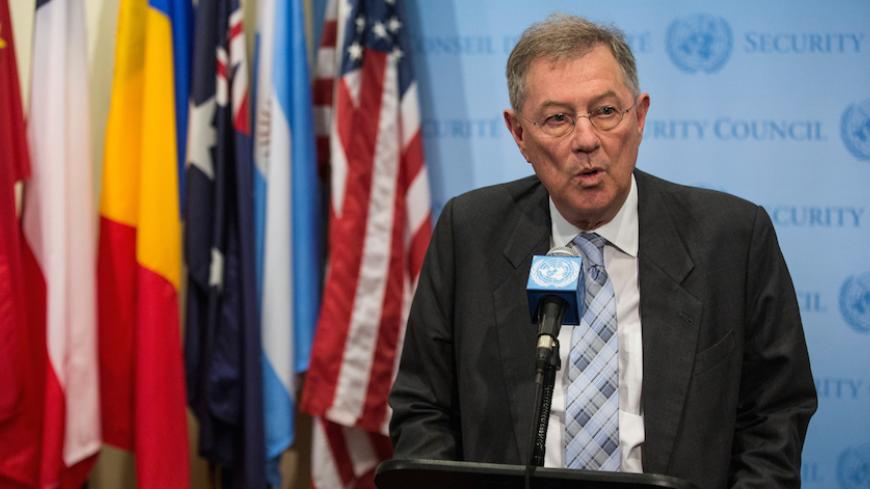 GAZA CITY, Gaza Strip — Talks about a long-term truce between Hamas and Israel have surfaced again after it was revealed that there had been an initiative to reach an understanding that could last for years, in return of achieving complete stability on the Israeli borders with the Gaza Strip, and ending the siege.

The initiative was made about two months ago by Robert Serry, UN special coordinator for the peace process in the Middle East, between the main parties, Hamas and Israel, as well as the Palestinian Authority (PA) in Ramallah and Egypt, the recent war’s cease-fire agreement sponsor.

Hamas quickly denied proposing a truce with Israel for five years, in return for ending the siege, according to what the Israeli website Walla published. But at the same time, it noted that a similar initiative was made by foreign parties, whose names it did not mention in its official statement. Serry himself had confirmed that he made the initiative during a meeting with a number of Palestinian journalists in Gaza City.

The initiative included a truce that would last four to five years, under the umbrella of the Palestinian unity government led by Rami Hamdallah. During this period, the Gaza Strip would be reconstructed and all military activity above ground and underground (tunnels) would be halted. In return, the Rafah crossing would be reopened and the Israeli siege that has lasted for over seven years would end.

Mousa Abu Marzouk, the deputy chairman of Hamas’ political bureau, denied on Twitter the existence of any agreement or initiative. But a source who participated in the meeting held by the UN envoy to Gaza confirmed that a truce was proposed to Hamas.

Abu Marzouk tweeted: “We did not give our approval to any of the parties that spread the news. This is not on our agenda because our national responsibility, the unity of our cause and its future are undisputable.”

Serry’s proposal included a long-term cease-fire for the sake of the Gaza Strip’s reconstruction, since countries are not up to donating money for the reconstruction of buildings that might be destroyed again in another round of war unless there is a guarantee that it won’t happen again.

The proposal also included the Palestinian government’s participation, which means that Hamdallah’s government would have the freedom to operate in the Gaza Strip without any interference.

A prominent Hamas source explained the situation to Al-Monitor on condition of anonymity, saying “Two meetings were held between Hamas and the UN envoy, Serry. The first was around two months ago, attended by three Hamas leaders, during which the initiative was presented to them. The envoy gave them two printed copies of the initiative, one in Arabic and the other in English. The second meeting was held at the beginning of this month [March], attended by Hamas’ Gaza leader Ismail Haniyeh, during which the initiative’s outlines were discussed."

He added, “Serry was serious in his initiative. He wanted to leave office by accomplishing an achievement on the ground and he wanted the concerned parties to reach a truce that would guarantee achieving stability. However, the fact that he is leaving office at the end of this month [March] might impede the success of this initiative, especially in light of the changes in the Israeli political map following the general elections.”

The source noted that the proposed initiative is indeed on the table of discussion of Hamas’ political bureau and the movement did not reject it. The initiative can be achieved in light of specific details since the outlines have been agreed upon, but certain definitions and further details for a number of proposed points must be added.

Hamas does not mind implementing the current fragile calm agreement that was set since the Egyptian-sponsored cease-fire was announced in Cairo following last year's 50-day war, which was supposed to be more thoroughly discussed; however, the current security events in the Sinai Peninsula and in Egypt are still preventing that.

The head of Hamas’ political bureau and the leader of the military wing in the Gaza Strip both noted that their movement does not wish to renew the confrontation with Israel at this moment. On Feb. 24, Haniyeh said, “Hamas is not concerned with a new confrontation with the occupation.” The same was expressed by Marwan Issa, Izz ad-Din al-Qassam Brigades leader, at the same place during his speech, when he said, “We do not currently seek to have further confrontations with the Israeli occupation.”

The same source told Al-Monitor, “Hamas cannot give clear and explicit answers, or agree to a long-term truce due to the Israeli elections, since the form and the policies of the future Israeli government toward the Gaza Strip are still unknown.”

Al-Monitor Israel Pulse columnist Shlomi Eldar wrote, “In my assessment, no Israeli leader — not incumbent Prime Minister Benjamin Netanyahu, and not even Zionist Camp leader Isaac Herzog should he be elected — would be willing to open the passages to Gaza merely on the basis of a Hamas promise of a cease-fire. Considering Hamas' current situation, it needs to go the distance and make some far-reaching changes if it wants to save Gaza residents, and itself.”

Hamas does not seem eager to engage in a new confrontation with Israel any time soon in light of the current political complications on the internal Palestinian scene, in addition to the changes of the situation in the region.

However, Hamas aims to show that it is renewing its military power and sending signals, almost on a daily basis, whether through statements or by trying out its locally made rockets in the sea, to prove that it was not defeated in the recent war.