The conduct of talks between Hamas and Israel about a truce has raised suspicions among Palestinian Authority and Fatah officials that Hamas hopes one day to establish a "State of Gaza," independent of the West Bank. 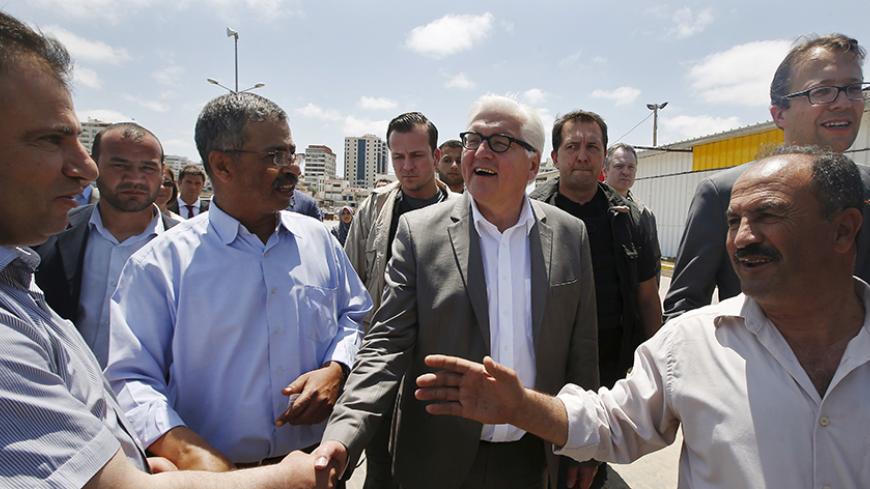 A notable string of Western diplomatic delegations paid visits to the Gaza Strip this past spring. Most recently, German Foreign Minister Frank-Walter Steinmeier visited June 1 to discuss a truce between Hamas and Israel, the reconstruction effort following the 2014 war on Gaza and alleviation of the blockade imposed since 2006.

Speaking on condition of anonymity, a Western diplomat who frequently visits Gaza told Al-Monitor, “The primary purpose of the foreign visits to Gaza is to test the waters between Israel and Hamas, to prevent a new military confrontation between both parties by reaching a long-term truce of five years. There have been many security reports presented to the European foreign ministries by their consuls residing in the Palestinian territories noting that the situation in Gaza might explode soon due to the increasing suffering of the Palestinians.”

It seems clear that achieving a truce between Hamas and Israel is being discussed behind the scenes by a number of high-ranking figures from the involved parties. They include Ambassador Mohammed al-Emadi, head of the Qatari National Committee for the Reconstruction of Gaza; Nickolay Mladenov, special representative of the UN secretary-general to the Palestine Liberation Organization (PLO) and the Palestinian Authority (PA); Maj. Gen. Yoav Mordechai, Israeli coordinator of government activities in the territories; and Mousa Abu Marzouk, a member of Hamas’ political bureau. Official sources in Gaza, Doha and Cairo confirmed to Al-Monitor that in the past few weeks, the parties had exchanged direct and indirect communications on conditions for a truce.

Salah Bardawil, a member of Hamas’ Legislative Council and a movement spokesperson, said that Hamas had settled on the following principles to support a truce: “The truce should have a specific time frame and international guarantees; it should not separate the West Bank and the Gaza Strip; and it should be achieved within a national consensus between the forces of the Palestinian people.”

The talks have coincided with unexpected Israeli statements advocating a political solution with Hamas regarding Gaza. Gen. Yoav Har-Even, head of the Israeli army’s Operations Division, issued a statement June 19 in which he said there is no military solution to the issue of Gaza.

Osama Hamdan, Hamas’ international relations chief, said June 16 that the movement had received truce-related ideas in writing from parties whom he refused to reveal. According to him, Hamas' leadership is reviewing the ideas in anticipation of responding to them. Abu Marzouk, however, told Al-Monitor a different story. “Hamas has not received any written ideas regarding a truce with Israel, so nothing requires a response. All ideas related to the project of a truce, which have yet to crystallize, are being discussed by Europeans,” he said.

Interestingly, the PLO factions issued warnings June 17 about paving the way for the separation of Gaza and the West Bank, condemning Hamas for unilaterally discussing a truce, without additional Palestinian input. Meanwhile, Hamas has not issued any official statements about conducting indirect talks with Israel on the issue. According to a Hamas official who requested anonymity, the movement — in an attempt to suppress speculation that could do more harm than good — is making sure information is not leaked, as it seems to be slowly and carefully seeking an agreement.

In the past few days, however, optimism has been detected in Palestinian circles about a possible truce that would relieve the besieged Palestinians of Gaza, providing them with some breathing room after three wars launched by Israel, in 2008, 2012 and 2014. This optimism was reflected in Abu Marzouk’s unannounced voyage from Gaza to Egypt on June 13 and then to Qatar, where the Hamas leadership resides, to discuss proposed truce ideas. On June 16, Ismail Haniyeh, deputy head of Hamas’ political bureau, had a phone conversation with the emir of Qatar, Tamim bin Hamad Al Thani, to discuss the Gaza reconstruction process and lifting of the blockade.

Ahmed Yousef, Haniyeh's former political adviser, told Al-Monitor, “European officials are trying to overcome the obstacles between Hamas and Israel, out of fear that the situation in Gaza might explode, after the issuance of international reports confirming that Gaza is on the brink of explosion. However, these efforts have not yet reached an advanced stage.”

Egypt, too, is said to be involved in the truce negotiations. Cairo took one step toward helping alleviate the harsh conditions in Gaza by unexpectedly opening the Rafah crossing June 13-19. According to an Egyptian source requesting anonymity, Cairo will be taking similar positive steps in the future as well. It was the first time the crossing had been opened without complications since the ouster of President Mohammed Morsi in July 2013 and the tensions that ensued between the new government and Hamas.

The most surprising development, however, was the dissolution of the Palestinian consensus government June 17, apparently because of PA frustration over being excluded from Gaza. President Mahmoud Abbas has asked former Prime Minister Rami Hamdallah to form a new government.

That the ongoing talks between Hamas and Israel are being conducted through European and Qatari mediation confirms that the PA is not involved, leaving it on the sidelines of any possible agreement. According to some, the talks are serving to reinforce Hamas’ presence on the regional and international scene, putting it at the forefront of the Palestinian file.

It appears the resignation of the Palestinian government resulted in part from the PA's marginalization in the indirect talks with Israel. Some see it as a bid to reshuffle the cards in Palestinian affairs and impede Hamas’ move toward a truce. Hamas rejected the government dissolution, arguing that ministerial changes must be made after consultation and agreement among all Palestinian factions, not unilaterally.

On June 18, Fatah Central Committee member Azzam al-Ahmed perhaps revealed the real reason behind the PA's anxiety over the truce talks when he accused Hamas of using the negotiations as a prelude to establishing a state in Gaza separate from the West Bank. Abu Marzouk responded by saying, “The PA’s accusations of Hamas’ security coordination with Israel to establish the State of Gaza are only excuses for President Abbas to avoid his responsibilities toward besieged Gaza. Hamas wants a state not only in Gaza, but in all of Palestine.”

Based on the limited leaks from Hamas, Israel and the Europeans, one can surmise that baby steps are indeed being taken toward a truce desired by each party for its own reasons. Hamas wants a cease-fire that will compensate for the years of siege, revive a populist environment that embraces Hamas and settle the security situation in Gaza.

Meanwhile, Israel wants to avoid any escalation of the security situation due to Gaza's harsh living conditions and free itself to be able to focus on more dangerous security challenges, such as the Syrian civil war, which is knocking on its door, and growing fears of a third war with Lebanon's Hezbollah.