Palestinians were shaken up by the quickly retracted news that Qatar was to open an embassy in Gaza, a move that would greatly complicate the political division between Hamas and Fatah. 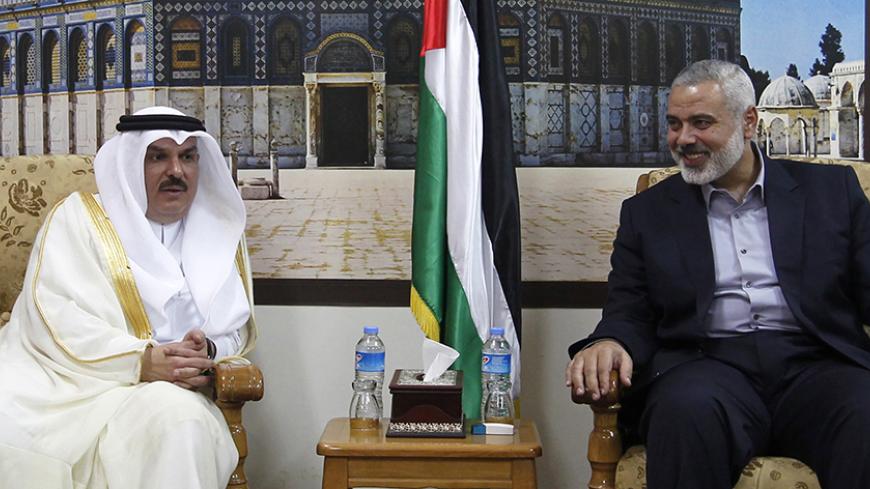 The head of the Hamas government in the Gaza Strip, Ismail Haniyeh (R), meets with the head of a Qatari delegation, Mohammed al-Emadi, in Gaza City, Gaza, Sept. 25, 2012. - MOHAMMED ABED/AFP/GettyImages

Qatar's Gaza Reconstruction Committee briefly announced its intention to build an embassy in Gaza. According to its Jan. 9 Facebook post, a building was to be erected south of the port of Gaza, on a five-acre lot that would also include the ambassador’s residence. But only hours later, the committee replaced the post with another statement reading that Qatar is getting ready to establish a building for the reconstruction committee and not an embassy. There was no explanation for the correction and the original news was deleted.

The news, announced on Jan. 9, quickly spread among Palestinians, prompting the Qatari ambassador to the Palestinian territories to issue a statement on Jan. 10. Mohammed al-Emadi, who is also chairman of the Gaza Reconstruction Committee, said, “News about the building of a Qatari Embassy in Gaza are inaccurate. The building to be established will be the headquarters of the Qatari committee overseeing Qatar’s projects in Gaza. All Qatari projects in both the Gaza Strip and the West Bank are in coordination with the Palestinian government of national consensus.”

Qatar seems to be one of the most heavily invested countries in Gaza. Its Gaza Reconstruction Committee has played a prominent role in the revitalization of the Palestinian economy and the construction activity in Gaza. Qatar has played a major role in the Fatah-Hamas reconciliation, and it announced on Jan. 11 that it is ready to mediate a prisoner exchange deal between Hamas and Israel.

Most recently, Qatar intervened to help end the electricity crisis in Gaza that started the first week of January, and it announced on Jan. 15 that it has donated $12 million for the purchase of fuel needed to run Gaza’s sole power plant.

A Palestinian government official in Gaza who has close ties with Qatar told Al-Monitor on condition of anonymity, “Hamas wants Qatar to have an embassy in Gaza because the country recognizes the movement in the Strip, but Qatar is yet to give a final answer since it seeks to maintain balanced relations with both the Palestinian Authority and Hamas. Emadi and his staff are currently staying at the Movenpick Hotel in Gaza, and Qatar may be wanting to transfer the management of its projects from the hotel to a permanent location that would be less than a diplomatic embassy and more of a projects office.”

In June 2007, after Hamas took over Gaza, 10 Arab and foreign embassies moved their headquarters to Ramallah. Only representative offices for Russia, France and Germany remained to manage the interests of their countries and process travel visas for Gazans. Other European countries leave those tasks to the European Union office in Gaza.

Amin Maqboul, a member of Fatah’s Revolutionary Council, told Al-Monitor, “Any representative office or embassy to Palestine should be established in Jerusalem, the soon-to-be capital, in coordination with the Palestinian leadership and the government of national consensus. Otherwise, it would be a violation of diplomatic norms.”

Ramallah in the West Bank is currently the Palestinian Authority’s (PA’s) actual capital where all Arab and foreign ambassadors and consuls reside.

Qatar’s announcement to establish an embassy in Gaza was highly discussed on social networks. Some see it as a prelude to the recognition of an independent state in Gaza, others see the office as a natural need.

Abdel Sattar Qassem, a professor of political science at An-Najah University in Nablus, told Al-Monitor, “Israel should first agree on Qatar’s opening of an embassy in Gaza because it still considers the Strip under its political and security controls despite withdrawing from it in 2005. Also, I do not see why it would object, since Qatar could play a major role in domesticating Hamas and minimizing its resistance activities. Qatar has major influence on Hamas in light of the huge amounts of money it spends in Gaza.”

He added, “I do not think the PA would object to a Qatari Embassy in Gaza since the PA also benefits from Qatar’s support and it is not in its interest to anger it. However, Qatar’s move could encourage other countries, such as Turkey, to do the same, which would entail a diplomatic recognition of Hamas’ rule in Gaza.”

Before talks about a Qatari Embassy in Gaza emerged, Mousa Abu Marzouk, a member of Hamas’ political bureau, spoke on Dec. 30 about the possibility of establishing a confederation between Gaza and the West Bank, in light of the failure to end the division between the two parties. His comments, however, sparked angry reactions among Palestinians. On Jan. 2, Abu Marzouk clarified that the issue of a confederation had not been officially discussed within Hamas.

Ahmed Yousef, the former political adviser to the deputy head of Hamas’ political bureau, Ismail Haniyeh, told Al-Monitor, “Establishing headquarters to manage Qatar’s interests in Gaza is natural, whether it be an embassy or a projects office. Qatar is active on several Palestinian issues and it helps organize Gaza’s ties with Israel — while Egypt remains absent from the Palestinian arena. This is why Qatar needs to establish an office or an embassy, to which Israel will not object. Qatar is able to dispel the PA’s fears of an embassy by informing it that this does not mean the recognition of an independent state in Gaza, and the only purpose is to manage its interests and projects. This is why there was no negative feedback from Ramallah on the Qatari move.”

If Qatar becomes the first country to open its own embassy inside Gaza, it would violate diplomatic norms. Minister of Public Works Mufeed al-Hassanieh said Jan. 10 that no one had contacted him about a Qatari Embassy in Gaza, stressing that such a move would deepen the Palestinian division and promote the notion of an independent state in Gaza.

Alaa Abu Amer, a former diplomat for the PA Foreign Ministry, told Al-Monitor, “It is understandable for Qatar to establish a consulate in Gaza. However, building a large embassy [in Gaza] raises questions, since an ambassador is the representative of a country’s president before the president of another country and President Mahmoud Abbas’ headquarters are in Ramallah, Palestine’s temporary capital. This also raises questions about Qatar’s support to Palestinian factions.”

Israel did not officially respond to the Qatari step, but Yoni Ben-Menachem, a former officer in the Israeli intelligence services, wrote in a Jan. 10 article for the Jerusalem Institute of State Affairs that the establishment of a Qatari Embassy in Gaza would mean Qatar is convinced that the Palestinian state will finally be established in Gaza only.

Al-Monitor contacted several PA ministers and members of Fatah’s Central Committee for comment, but none would do so publicly.

One PA minister, however, told Al-Monitor on condition of anonymity, “Communication channels between Ramallah and Doha are still open, but the Palestinian government is unaware of a Qatari Embassy that is allegedly going to be set up in Gaza. Regardless, we trust that our Qatari brothers would not do anything that would deepen the Palestinian division between Gaza and the West Bank.”

Regardless of its official title, the headquarters Qatar wishes to establish in Gaza would strengthen Qatari-Hamas relations, which could give the movement a stronger sense of alliance with a rich and influential regional country. Complicating the mixed reactions over the Qatari move, the PA seems to want to avoid angering Qatar, one of its strongest supporters.