Why the PA wants to stay on good terms with Qatar 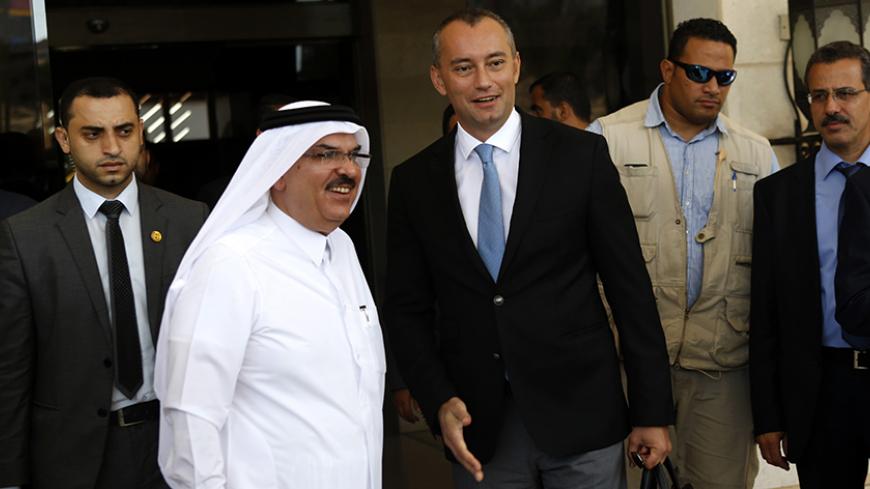 Mohammed al-Emadi, Qatar's ambassador to the Palestinian territories and head of the National Committee for the Reconstruction of Gaza, arrived in the Gaza Strip July 28 and left three weeks later, on Aug. 17. This visit to Gaza was his longest since he became head of the committee when it was established in late 2012 to rebuild what was destroyed by the first Israeli war on Gaza (December 2008-January 2009).

During his stay in Gaza, Emadi visited the Islamic University on Aug. 7. He attended the graduation of the first class of deaf students and offered them a grant of $500 each. The Islamic University is one of Hamas’ most important institutions. On the same day, Emadi toured the University College of Applied Sciences and praised its academic efforts.

Meanwhile, on Aug. 14, Emadi visited the Saint John Eye Hospital, where he inspected the facilities and offered a donation as well. The next day, he signed contracts with Palestinian contracting companies for a number of projects worth $40 million, including housing, roads, infrastructure and restoration of houses, farms, schools and playgrounds.

Usually, when Arab and foreign ambassadors visit the Gaza Strip, they rarely have a schedule similar to that of Emadi. His visits and banquets raised many questions among Palestinians about the true nature of Emadi’s humanitarian and political role in the Palestinian territories.

Omar Shaban, the head of PalThink for Strategic Studies in Gaza, told Al-Monitor, “Qatar and Emadi are making generous donations to Palestinians — for political purposes. Qatar has a close relationship with Hamas; its ties with the Palestinian Authority [PA] aren't that close, but aren't hostile either. This is because the PA has financial interests with Qatar and seeks to stay on its good side, in light of the Israeli-Qatari coordination regarding [Qatar’s] work in the Palestinian territories — especially in Gaza as Israel is still in charge of the Gaza Strip in terms of controlling the crossings and deciding who or which goods can enter or leave Gaza.”

During the past four years, Emadi visited the Palestinian territories intermittently, especially the Gaza Strip, to monitor Qatari projects. However, his latest visit was different as it included meetings with several officials from different Palestinian sectors. In addition to visiting academic institutions, he hosted separate lunch and dinner banquets for political and economic elites.

On Aug. 7, Emadi hosted the first banquet for dozens of government officials, current and former Palestinian ministers, and former Prime Minister Ismail Haniyeh. He held another banquet Aug. 9 hosting 150 figures, including representatives of national and Islamic forces and deputies and reformists; on Aug. 14, he hosted a third banquet for heads of Palestinian universities and academic figures in Gaza.

Walid al-Awad, a member of the political bureau of the Palestinian People's Party, told Al-Monitor, “The leftists refused Emadi’s invitations because they were limited to lunch and dinner banquets. Although we highly appreciate those supporting our country, Emadi’s role goes beyond the humanitarian aspect and reaches the point of entrenching Qatar’s influence in Palestine. In addition, he showed normalization with Israel by meeting with Gen. Yoav Mordechai, the Israeli coordinator for the Palestinian territories, during his visits to Tel Aviv, last of which was in April. Although Qatar’s influence will remain in Gaza as long as the Palestinian division persists — and the PA is well-aware of this — it is [the PA’s] financial interests with Qatar that push it to show pragmatism toward the Qatari role in Gaza.”

Perhaps some Palestinians believe that Qatar, through Emadi — who often visits the Palestinian territories, and Gaza in particular, and personally oversees the implementation of Qatari projects in Gaza — has an important say in many issues that affect the lives of Palestinians.

On Aug. 16, the Palestinian media published a picture of Emadi overseeing the payment of the salaries for the employees of Hamas’ government from the Qatari grant, which amounted to $31 million. This confirmed the speculations of some Palestinians who are concerned about Emadi’s increased influence in Gaza, but who still want his humanitarian aid.

For his part, Ahmed Youssef, the former undersecretary of the Palestinian Ministry of Foreign Affairs in Gaza, who attended one of the banquets, told Al-Monitor, “Emadi hosted government, partisan and academic figures to listen to them and learn about the Palestinian situation, to relieve the suffering of Gaza and exert all possible efforts to lift the blockade. He has high morals, and he is distinctively diplomatic. He tries to have a balanced relationship with everyone.”

Interestingly enough and despite the constant disputes between Hamas and the PA on most issues, they both agreed to thank Emadi personally and praised the role of Qatar in general in the Palestinian territories.

On Aug. 15, Palestinian Minister of Works and Public Housing Moufid al-Hasayneh praised the Qatari efforts for the reconstruction of Gaza, describing Emadi as a Palestinian man par excellence, who travels between Gaza, Ramallah, Jerusalem and Qatar to serve the Palestinian people.

Meanwhile, Hamas spokesman Hazem Qassem told Al-Monitor, “Hamas maintains its relationship with Qatar to support the steadfastness of our people — both politically and financially — and Qatar is actively doing so. Ambassador Emadi is highly appreciated by the Palestinian people for his support. He communicates with all Palestinian forces with no exception and supports all civil and service institutions with no discrimination. Hamas does not fear Qatar’s increased influence in the Palestinian territories, because the movement’s political positions are not influenced by anyone and Hamas perceives the Qatari support as part of the Arab countries’ duty toward the Palestinian people in supporting their steadfastness in resisting the Israeli occupation, and Qatar is greatly diligent in this regard.”

Emadi is significantly celebrated by the Palestinians, much like their own political leaders, perhaps because his name is associated with financial support, which is what the Palestinians need at this stage instead of political slogans.

The Qatari ambassador has the ability to establish a strong network of relations between Hamas, the PA and Israel. Thus, Emadi’s duties go beyond humanitarian support and can be reflected in political mediations between these hostile parties, which is why some Palestinians praise him and others object to his role.