Qatar has been increasingly involved in talks between Hamas and Israel in what raises questions about its exploitation of the Gaza card in the Gulf crisis. 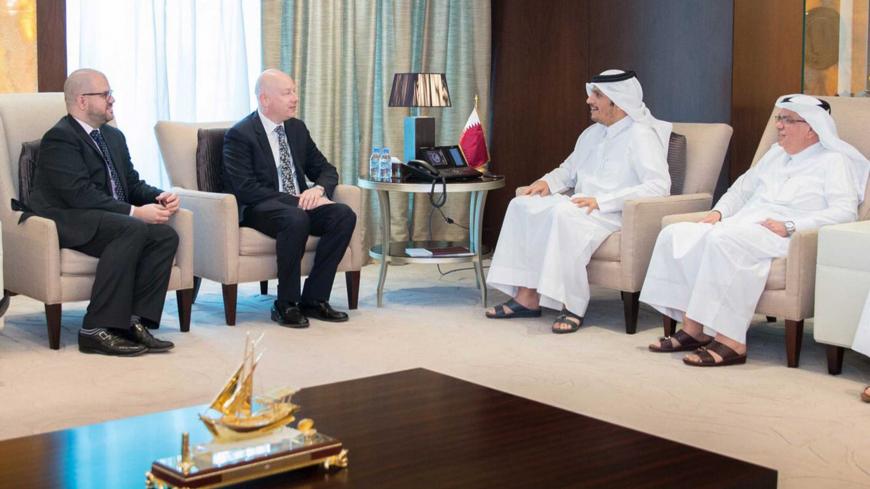 GAZA STRIP — Qatar's role is increasing daily in the Palestinian territories in general and the Gaza Strip in particular, at a time when appeasement consultations have been ongoing since May between Hamas and Israel amid Qatari, Egyptian and UN mediation. While no direct meetings have been held between Hamas and Israel, mediation attempts have been exemplified by the transfer of indirect messages between the two parties.

For its part, Israel's Channel 10 reported Aug. 16 another meeting between Liberman and Qatar’s Ambassador to the Palestinian territories Mohammed al-Emadi in Cyprus on June 22.

The news was only covered a month later, as the meetings were held amid absolute secrecy and were subsequently leaked to the Israeli media.

According to the two mentioned websites, these two meetings focused on Qatar’s potential economic support for the Gaza Strip and discussed means to put more efforts into achieving a truce between Hamas and Israel, all while bearing the financial burden of Gaza’s reconstruction and financing a number of humanitarian projects.

Adnan Abu Hleil, who writes for Qatar's Al-Sharq newspaper, told Al-Monitor, “Qatar is trying to get a hold of the Palestinian cause. It is true that [Qatar’s] economic projects in Gaza have a humanitarian character, but there are also political interests involved. These include increasing the Qatari influence within the Palestinian territories and expanding the Qatari relations with the countries of the region. Also, the Qatari performance is characterized by pragmatism and openness to all parties, as Qatar does not have any veto on any party. This includes Israel, which is seeking to maintain some contact lines with Hamas. Meanwhile, Qatar is maintaining its close ties with Hamas — and despite the criticism leveled at Qatar, its management of the Gaza issue proved its ability to establish seemingly contradictory relations.”

The relationship between Qatar and Hamas started in 1999, back when the movement's leaders flocked to Qatar. After 2006, when Hamas won the Palestinian legislative elections, Qatar became one of the most important political supporters of Hamas. What further entrenched their relationship is that the Hamas leadership withdrew from Syria in 2012 following the outbreak of the Syrian revolution due to the movement’s dispute with the Syrian regime over its dealing with popular demonstrations. The Hamas leadership is now based in Doha.

In conjunction with the recent Israeli-Qatari meetings that have been recently revealed, Emadi’s visits to the Gaza Strip and his meetings with Hamas leaders have intensified, most recently at the end of June.

Of note, unlike any other Arab or foreign ambassador or diplomat who visits Gaza, Emadi enjoys a wide network of connections with politicians, businessmen and political figures in Gaza. This means that Hamas gives him exceptional importance when he visits Gaza, as it deals with him as an extraordinary ambassador who has political, economic and possibly security contacts with Israel.

Hamas spokesman Fawzi Barhoum told Al-Monitor that “Qatar is involved in discussions about lifting the Gaza siege, achieving a truce with Israel, paying the salaries of Gaza’s employees, and starting other humanitarian and economic projects. And Hamas’ keenness to embrace any effort aimed at putting an end to the Israeli aggression makes it accept the Qatari, Egyptian and UN roles in a bid to achieve the interests of the Palestinian people. As for Qatar’s communications with Israel, then this is a Qatari issue that we shall not interfere with.”

It should be noted that the Hamas leadership holds its meetings in Qatar, which may lead Qatar to have a relative impact on the internal and external political orientations of the movement. It is true that Hamas says its decisions are independent, but the influence that Qatar enjoys in Israel and the United States may lead it to serve as a mediator between these parties. This is why the Hamas leaders heed the Qatari positions whenever important events occur.

A member of the Fatah Central Committee told Al-Monitor on condition of anonymity, “In recent weeks, Qatar announced 90 million shekels a month, the equivalent of $24.78 million, in salaries to Hamas employees in Gaza and pledged to solve the electricity problem.”

However, one of the obstacles that may prevent the success of any Qatari effort in Gaza is Egypt's geographic proximity to the Gaza Strip. Cairo has bad relations with Doha, and it has openly expressed its anger at what it perceives as Qatari interference in Gaza. Egypt believes that Gaza affects Egypt's national security. The Gaza Strip is adjacent to the Sinai Peninsula, which is experiencing a tense security situation. Armed groups have been active since 2011 and are engaged in bloody confrontations with the Egyptian army.

Also, Egypt believes that it is the only country that is competent enough to deal with all things related to Gaza, including reconciliation between Fatah and Hamas and the truce with Israel.

Mansour Abdel Kareem, a Palestinian researcher at the Ro'ya Center for Studies and Searches in Gaza, told Al-Monitor, “Qatar is conducting indirect negotiations between Hamas and Israel, and Egypt is only maintaining a facade of mediator while the real channel is Doha, not the Egyptian intelligence. Qatar is playing this role to serve its own agenda, as it believes that Gaza could serve as a strong card in light of its regional conflict and the ongoing Gulf crisis. This is why Qatar is competing with Cairo to get a hold of the Palestinian card, but Cairo will not allow any Israeli-Palestinian agreement in which Doha is a major player.”

Washington and Tel Aviv know full well that Doha exerts a strong influence on Hamas, and this makes them push toward increasing the Qatari influence in Gaza in a bid to achieve calm there.

A bumpy road seems to be lying ahead of Qatar, however, as it faces strong internal and external obstacles that impede its management of the Palestinian dossier and stops it from communicating with the rest of the regional and international parties so long as its opponents keep their veto on its movements.