Hamas says it has reached understandings with Qatar and Israel to contain the escalation in Gaza, but details of the agreement are murky. 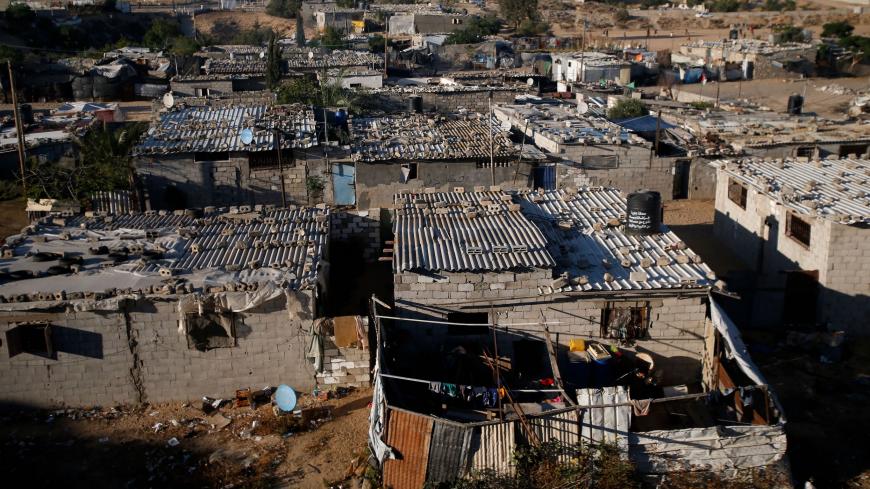 An impoverished area in the southern Gaza Strip refugee camp of Khan Yunis is pictured on May 13, 2019. - MOHAMMED ABED/AFP via Getty Images

Hamas and Israel reached a Qatari-brokered deal to end the latest round of violence, the Gaza administration announced Aug. 31. The deal also includes several projects serving the Gaza Strip. Hamas thanked the Qatari ambassador to Palestine, Mohammad al-Emadi, for his efforts.

Since the beginning of August, tensions have grown in the Gaza Strip, with incendiary balloons lighting fires in Israel in an effort to force it to ease the siege in place on Gaza since 2006. Israel responded with airstrikes on Hamas positions and closed off access to the sea. It also closed the only open trade crossing with Gaza and halted fuel shipments, leaving Gazans with less than four hours of electricity per day.

Gaza's coronavirus crisis has also worsened since Aug. 25, with cases reaching 581 as of Sept. 3, according to the enclave's Health Ministry.

Emadi announced on Al-Araby TV Sept. 2 that Qatar has pledged $34 million to prevent a humanitarian crisis in the Gaza Strip, including $7 million for those affected by the coronavirus. He added that Qatar has supplied the Ministry of Health in Gaza with 20,000 testing kits. Arrangements were also made with Israel to allow the entry of 7,000 Gazan workers into Israel and supply the Gaza Electricity Company with natural gas at a cost of $2.5 million. He did not specify who would bear it.

While Hamas' statement thanked Qatar for its efforts and did not mention Egypt, Haya said during the Sept. 1 interview that Israel had foiled Egyptian efforts to achieve a truce.

This statement seems to point to Qatar's exclusive success in Gaza, where it won influence at Egypt's expense.

Hamas spokesman Hazem Qassem told Al-Monitor, “The truce was reached following calls between Egypt, the United Nations and Qatar, but it was implemented during Emadi’s visit to Gaza that began Aug. 25. Whether the situation will remain calm or not depends on Israel’s implementation of the agreement, which is considered a step toward breaking the siege. The coronavirus pandemic deepened Hamas’ insistence on its demands. The humanitarian situation has become tougher with the coronavirus. Hamas’ dealings with Egypt and Qatar serve the interests of our people. We have important relations with them and we want to develop our ties.”

Unlike previous escalation rounds, Hamas did not launch rockets on Israel, and no Palestinians were killed in Gaza in the Israeli shelling, a sign that neither party wanted an open confrontation. Things may have gone differently if not for the novel coronavirus. It would have been difficult for Hamas to battle both the pandemic and Israel at once.

Mohammed al-Brim Abu Mujahid, a spokesperson for the Popular Resistance Committees, told Al-Monitor, “We have engaged in a real confrontation with Israel, even if it was limited to balloons. Through our indirect negotiations with Israel, we have earned points and broken some aspects of the Gaza siege without incurring human and material losses. We did not reach our demands to lift the siege completely, but this is what we got. The coronavirus pandemic expedited the end of this round.”

He noted, “Qatar has been patient throughout the negotiations with the Israelis, with Emadi shuttling between Gaza and Tel Aviv. He eventually succeeded in easing some of the restrictions imposed on Gazans, who have been suffering on a daily basis. Qatar worked alongside Egypt and the UN for the same goal, which is to achieve calm and alleviate the siege. But Qataris spearheaded the initiative, which deepened Palestinians’ trust in them, though we would never forget Egypt’s continuous role.”

An official from a Palestinian faction in Gaza who asked not to be named revealed to Al-Monitor, “The Egyptian intelligence delegation that arrived in Gaza Aug. 17 and met with Hamas leaders told them that the political situation was not in their favor and that the escalation should be halted. Hamas interpreted the message as an Israeli threat sent via the Egyptians. Therefore, Egypt’s efforts failed early on, and the stage was set for Qatar, which served as a messenger between Gaza and Tel Aviv, rather than in only one direction.”

Qatar and Egypt are both working to win Hamas over and increase their influence. It is now clear that Qatar has been seeking to bolster its political and financial position and it has succeeded.

Hamas sees Egypt as a country with deep interests in the Gaza Strip as it borders the enclave. Meanwhile, Hamas benefits from Qatar’s funding and foreign connections. Hamas has proven able to communicate with both even though the two countries have deep-seated enmity over regional disputes including Cairo’s accusations that Doha is harboring Muslim Brotherhood leaders and members wanted by Egyptian authorities.

Said Basharat is the editor-in-chief of the Hodhod news site, which focuses on Israel. He told Al-Monitor, “Hamas clearly indicated its field demands during the recent round. Meanwhile, Israel does not want to engage in a military confrontation with Hamas, because it would ruin its diplomatic achievements. Hamas led the escalation round without bloodshed or military action. The Arab world has given up on it and Hamas is fighting alone. For that reason, the outcome of this round was modest. Hamas was quick to issue media statements about [the recent agreement], raising the hopes of Palestinians that the siege was to be completely lifted, but this did not happen.”

Gaza's leaders made overambitious statements, disappointing their people. Meanwhile, Israel back down from Israeli Prime Minister Benjamin Netanyahu's Aug. 19 threats to assassinate Hamas leaders. Israeli Minister of Defense Benny Gantz announced Aug. 7 that the sanctions on Gaza would not be lifted unless the bodies of Israelis held by Hamas are released.