Some hospital maintenance workers who haven't been paid in months expressed their frustration while the Qatari ambassador was visiting the Gaza Strip. 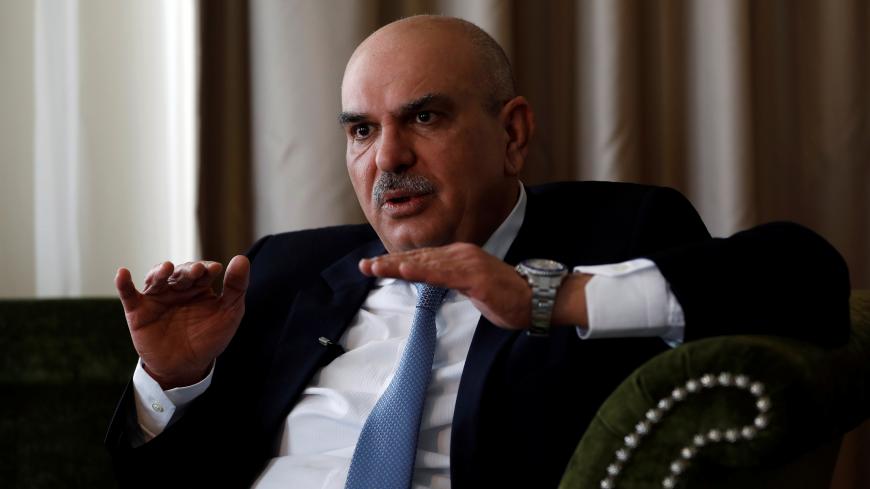 GAZA CITY, Gaza Strip — On Feb. 19, some Palestinians lashed out at Qatar's ambassador to the Palestinian territories, Mohammed Al-Emadi, during his visit to the Gaza Strip, sparking conflicting reactions. Some Arab media outlets that support the Gulf states' boycott of Qatar portrayed the demonstration as a Palestinian refusal of Qatar’s support for Gaza.

Some angry cleaning workers at Al-Shifa Hospital who have not received their salaries for five months shouted and pushed each other toward Emadi as he headed toward his car after his press conference. Emadi was there to announce the details of a $9 million Qatari grant for the hospital, which is the largest medical complex in Gaza City. Emadi said the grant would include funding for medical supplies, food and fuel, among other things, but he added that the unpaid salaries issue does not involve his country. The workers expressed their objection to Emadi ignoring their payment issue during the press conference, and security forces had to escort Emadi away from the premises.

The Palestinian Ministry of Health in Gaza has contracts with private cleaning companies handling the cleaning in hospitals and governmental health centers. Hamas handed the ministries over to the consensus government in Ramallah in the West Bank following the reconciliation agreement signed Oct. 12 in Cairo between Hamas and Fatah. The ministry in Gaza thus stopped paying the companies, thinking that the government in Ramallah would pay them. But Ramallah refused, saying the Ministry of Health in Gaza is not paying money it owes to the Palestinian Authority treasury, which amounts to about $20 million per month.

The reconciliation has been stalled, but Egypt, which has acted as mediator between Fatah in the West Bank and Hamas in Gaza, sent a delegation Feb. 25 to the Gaza Strip in an effort to move the process forward.

To contain damage from the Emadi incident, the cleaning companies that have contracts with the Ministry of Health in Gaza released a statement Feb. 19 expressing their condemnation of the workers’ actions. The companies dismissed the incident as individuals carrying out irresponsible acts against Emadi, and the businesses officially apologized to him on behalf of the workers.

Ministry of Health spokesman Ashraf al-Qudra in Gaza told Al-Monitor that the grant, which includes financial aid and medication, will revive hospitals and medical facilities in Gaza. Qudra said his ministry was thankful for the $9 million in aid that Emadi detailed during his visit.

Qudra noted that the cleaning workers were protesting at the time of Emadi’s arrival at the hospital, and that their reaction was spontaneous. Qudra denied any attack on the ambassador, as some media outlets had reported.

A cleaning worker who was there at the time of the incident told Al-Monitor on condition of anonymity, “Objections escalated and turned into screaming and pushing because the workers were devastated about their tough financial situation due to slackening in paying their salaries [from the Ministry of Health].”

The worker added, “As soon as Qatari Emir Tamim bin Hamad Al Thani announced the financial grant Feb. 9, cleaning workers in hospitals spread the news that Emadi would allocate part of the money given to hospitals to pay their salaries. But when Emadi concluded the press conference without discussing their problem, they threw a tantrum and blocked the path of Emadi’s car.”

The worker asked, “Where are the millions of dollars that donor countries, including Qatar, are granting Gaza? We are only given the leftovers.” He hoped the incident would not affect the Qatari aid to Gaza.

The 835 cleaning workers at all hospitals of the Gaza Strip went on strike Feb. 10 because they did not receive their salaries. As the strike is ongoing, garbage is scattered around the facilities, and more than 860 surgeries have been delayed. The Ministry of Health warned against the spread of diseases.

Adham Abu Salmia, the spokesman for the Popular Committee Against the Siege, told Al-Monitor that the incident with Emadi does not reflect the Palestinian people’s image. He said some hooligans had infiltrated into the cleaning workers’ group and caused a stir during the ambassador’s visit. The security officers handled the situation and held them accountable.

Salmia said Emadi understood the situation after governmental parties in Gaza and his advisers explained what happened. Emadi said the solution to the workers’ problem is in the hands of the consensus government rather than Qatar.

Palestinian Minister of Works and Public Housing in Gaza Mufeed Al-Hasayneh and Palestinian faction leaders met with Emadi separately Feb. 20 at his residence in Gaza and apologized for what happened. They praised the Qatari role in helping Gazans. Popular and youth movements held rallies in front of the hotel where he was staying to express their gratitude to Qatar.

Akram Atallah, a political analyst and writer at the Palestinian Al-Ayam newspaper, told Al-Monitor that Qatar’s support for the Gaza Strip has not yet helped to ameliorate the citizens' tough conditions.

Atallah ruled out the possibility that the incident might affect Qatar’s support to the Gaza Strip. He said, “Qatar’s support is not independent. US peace envoy Jason Greenblatt said Feb. 9 that Qatar’s efforts, with the cooperation of Israel, can relieve the humanitarian situation in Gaza.”

All aid and funds Qatar offers to Gaza have to enter through crossings with Israel, upon the approval of Israel, which monitors the details of how the money is spent to make sure none of it goes to Hamas, Emadi told Reuters on Feb. 22.

Khaled al-Halabi, a media professor at Al-Aqsa University in Gaza, told Al-Monitor that Gulf media outlets, with their extensive coverage of the Emadi incident, intentionally tried to portray the incident erroneously to make it look as if Gaza had rejected Qatar.

Halabi called on the media that support the Gulf countries' Qatar boycott to focus their efforts on helping citizens instead of distorting facts in Gaza. He said that their ongoing tarnishing of facts will weaken their credibility among Palestinians.

Palestinians in Gaza hope the incident will not affect Qatari support to Palestinians, which has been the largest in the Arab world in the past few years, with about half a billion dollars offered since 2012. Following the Feb. 19 incident in Gaza, Palestinian Twitter users shared the hashtag #Shukran_Qatar, which translates to “Thank you, Qatar” to express their gratitude.