In an interview with Al-Monitor, Yousef al-Ghariz, adviser to the chair of the Qatari Committee for Reconstruction of the Gaza Strip, discussed the ins and outs of the $400 million worth of projects the committee has implemented. 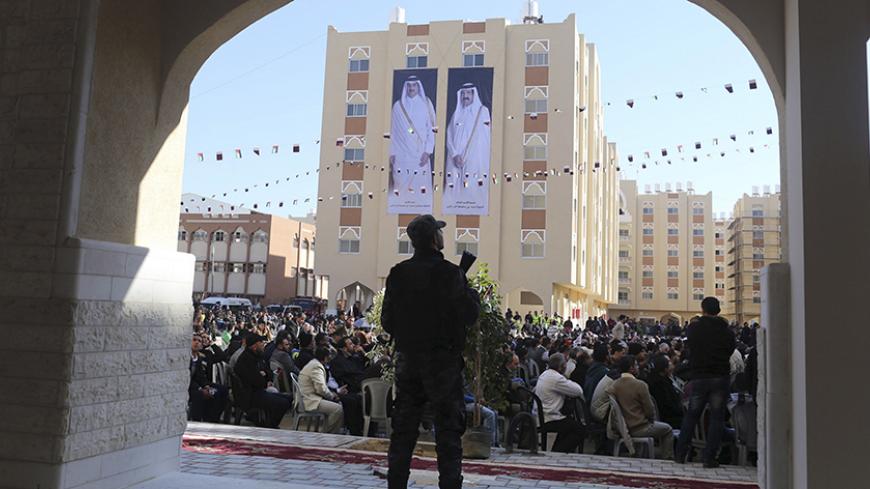 GAZA CITY, Gaza Strip — Yousef al-Ghariz, adviser to Mohammed al-Emadi, Qatar's ambassador to the Palestinian territories and head of the Qatari Committee for Reconstruction of the Gaza Strip, told Al-Monitor that the committee is in constant communication with the Palestinian leadership in Ramallah to carry out its work in Gaza. He said the committee coordinates with Egypt and Israel on the delivery of raw materials for construction projects and discussed its involvement in addressing various emergencies in Gaza — in particular, paying the salaries of public sector employees and tackling the energy crisis.

Ghariz has served in government posts, including as Gaza minister of public works and housing for Hamas from 2012-14, as well as in academia, heading the Department of Engineering, Planning and Information Systems at Gaza’s University College of Applied Sciences. Ghariz has also headed the Environment Quality Authority.

Al-Monitor interviewed Ghariz March 23 in his office in Gaza City.

Al-Monitor:  Qatar's Gaza Reconstruction Committee started work in the Gaza Strip in 2012. What are the main projects it has completed since then? How much did they cost?

Ghariz:  The committee started work in October 2012 and has played a key role in implementing Qatar’s $407 million grants program. Since then it has carried out a large number of projects. The most important have been building constructions, many of them residential, worth $160 million. The biggest is Sheikh Hamad bin Khalifa Al Thani City, in Khan Yunis, which includes more than 3,000 housing units.

There are also projects worth $155 million to tarmac and upgrade roads, most importantly the Salaheddin Road, which runs from the south to the north of the Strip, fully upgrading and equipping a 30-kilometer [19-mile] stretch of it. There is also a project to repair 40 kilometers [25 miles] of the al-Rashid coastal road as well as smaller side roads.

The committee has also implemented health projects worth $17.5 million, including building the Sheikh Hamad bin Khalifa Hospital for rehabilitation and artificial limbs in Gaza City. That comes on top of agricultural and livestock projects worth $7 million, efforts to reconstruct 1,000 housing units at a cost of $50 million and other infrastructure projects valued at $17 million.

Al-Monitor:  Qatar has supported a variety of projects in Gaza, from infrastructure to paving roads, renovating destroyed buildings and supporting municipalities. What are the committee’s criteria for selecting projects?

Ghariz:  Priorities for projects are set by a joint committee [of Palestinian government and Qatari Foreign Ministry representatives] in coordination with the Ministry of Public Works and Housing to identify the priorities of the Gaza Strip, start the tendering process and implement projects to the greatest possible benefit of local residents.

Al-Monitor:  The Qatari projects require raw materials and other essentials that are not available in Gaza. How are they acquired? Does Israel play a role in facilitating their import?

Ghariz:  The biggest challenge facing the committee is getting hold of the necessary raw materials for its projects. Given the blockade and the repeated closure of the border crossings in recent years, the committee has liaised with outside parties in order to bring in the required raw materials in two stages.

First, in coordination with Egypt, a joint committee including the Consolidated Contractors Company, a major Egyptian construction firm, and Egypt’s Ministry of Housing and Urban Communities in 2013 organized to bring in the necessary materials for these projects through the Rafah crossing. The second stage, launched Nov. 17, 2014, saw coordination within a joint committee involving Israel and the Palestinian Authority [PA] along with the efforts of Robert Serry, UN special coordinator for the Middle East peace process. The resulting agreement has been in operation since the last war with Israel, in 2014, but the Israeli side is preventing the delivery of all the materials needed for the Qatari projects.

Al-Monitor:  What is the role of the PA, represented by the Public Works Ministry, in monitoring Qatari projects in the Gaza Strip?

Ghariz:  The Ministry of Public Works and Housing is the authority tasked by the Palestinian government with monitoring Qatari-funded projects. It is also the technical authority for work that has been completed and is in charge of overall supervision of how the work is proceeding in terms of monitoring and follow-up.

Al-Monitor:  How does the Qatari committee deal with one government in the West Bank and another in the Gaza Strip? Which one does it liaise with?

Ghariz:  The committee cooperates largely with the Palestinian consensus government’s Ministry of Public Works and Housing [in Ramallah]. The Qatari ambassador, Mohammed al-Emadi, has good relations with all sides and meets regularly with various officials in both the West Bank and Gaza.

Al-Monitor:  The Qatari committee has on several occasions intervened at points of crisis in Gaza, most recently to help resolve the electricity crisis. Was this step taken on the initiative of the committee, or was it a direct intervention from the Qatari state? And why is Qatar so concerned with this?

Ghariz:  The committee is an implementing authority controlled by the Qatari Foreign Ministry. It is responsible for carrying out everything related to grants for the reconstruction of Gaza or any other grants the emir of Qatar charges it with implementing, such as one to provide $12 million worth of fuel to run the Gaza power plant for three months or the emir’s grant last August to pay Gaza public sector workers.

Al-Monitor:  Qatar’s projects in Gaza have provoked some Palestinian leftist factions, such as the Palestinian Front for the Liberation of Palestine and the Palestinian People's Party, because of the role Qatar plays in the region and accusations that it uses its projects for political goals. Are there political incentives and goals behind these projects?

Ghariz:  The reality shows that Qatar’s aim with these projects and its aid to Gaza is to help the Palestinian people by strengthening their steadfastness and easing their suffering. All the projects that Qatar has funded are in the framework of reconstructing Gaza and easing the impact of the blockade. Its projects serve thousands of Palestinians and provide them with numerous work opportunities to guarantee them a dignified life despite the difficult conditions the territory’s residents face.

Al-Monitor:  How does the committee respond to accusations that it is currying favor with Hamas and the authorities it runs in Gaza at the expense of the PA in Ramallah?

Ghariz:  The Qatari committee works with all parties that are related to the work of reconstruction in order to complete its tasks in the Gaza Strip. In particular, it works with the Palestinian Ministry of Public Works and Housing and its minister, Mufid al-Hasayneh. This is one of the ministries of the consensus government headed by [Prime Minister] Rami Hamdallah. The committee is equally close to all sides and doesn’t get involved in any internal Palestinian political disputes.

Al-Monitor:  The Qatari committee helped find a solution to the public sector salaries crisis in Gaza by paying the wages of public servants there. What is your view of this? What are the possible final solutions?

Ghariz:  The state of Qatar played a clear role with direct orders from the emir to pay sums of money to public sector workers in the Strip by providing a grant to cover the costs of public employees in August 2016, at a cost of $34 million. This was paid through the Gaza reconstruction committee in direct coordination with the United Nations. Qatar is continuing its efforts to bring together Palestinians and achieve reconciliation, which is the best way to solve all the crises facing the Strip, including the public sector wage crisis.

Al-Monitor:  Is the committee thinking of broadening the scope of its work to include the West Bank in the future?

Ghariz:  The committee was set up with a clear goal, which is in the name — reconstruction in Gaza, due to the repeated attacks it has faced from Israel in recent years. Despite that, Qatar has also achieved much with projects in the West Bank through its various institutions in different areas, including housing, health and agriculture.

Al-Monitor:  The Qatari ambassador, Emadi, travels regularly between Ramallah, Gaza and Jerusalem. How can we describe his relations with Israel in terms of making your work easier? Is there political coordination between you on the economic level?

Ghariz:  The coordination between the committee and Israel is purely technical. It aims at making it easier to bring in raw materials for projects the committee is implementing and avoiding obstacles in the completion of these projects, as well as guaranteeing that they continue in a way that delivers the greatest benefits to the people of Gaza.