Qatar’s engagement with Hamas and Israeli officials on Gaza reconstruction projects has provoked fears in the Palestinian Authority of a usurpation of its power. 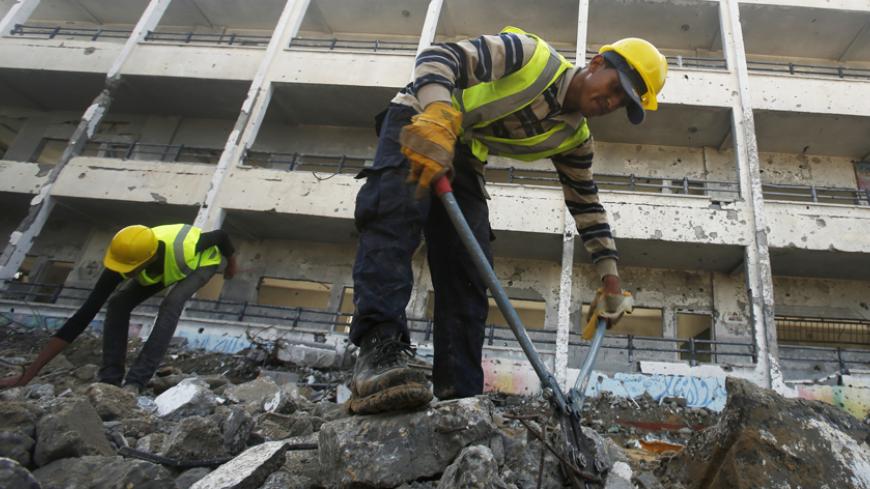 Palestinian workers clear the rubble of a school that witnesses said was destroyed by Israeli shelling during the most recent conflict between Israel and Hamas, in the east of Gaza City, Dec. 3, 2014. - REUTERS/Suhaib Salem

Ramallah, WEST BANK — The March 9 visit to Gaza by Qatari Ambassador Mohammad al-Amadi, also head of the Qatari National Committee for the Reconstruction of Gaza, and his meetings with Hamas and Israeli officials have aroused anger and fear within the Palestinian Authority (PA) and the Fatah movement. An official Palestinian source told Al-Monitor on condition of anonymity that the PA and Fatah are concerned about the potential marginalization “of the PA’s role in the reconstruction issue” after of the Qataris were reported to have sought direct Israeli approval for bringing reconstruction materials into Gaza for the construction projects they are funding.

The source said, “The PA fears the political implications hidden in the trenches of the Qatari initiatives and Qatar’s direct communication with Israel, particularly in terms of the proposed long-term bilateral truce between Hamas and Israel and the establishment of an airport and a seaport in Gaza.”

The source further stated, “Qatari involvement regarding a bilateral truce between Hamas and Israel means stepping around the PA’s role, leadership and position and ignoring Egypt's sponsorship of the Palestinian issue with Israel.” He said it would result in “the separation of Gaza from the West Bank, the establishment of a separate entity in Gaza with Qatari funding, the marginalization of the powers of the PA and government in the Gaza Strip and the preservation of Hamas’ control on the ground and over the crossings.”

In Gaza, Amadi had announced that the start of new Qatari projects was drawing near, after crossing into the territory from Israel through the Erez crossing after Egypt refused to allow the Qatari delegation through the Rafah border crossing, which Arab officials typically use. Thus the still simmering Qatari-Egyptian dispute precipitated Qatar resorting to Israeli assistance.

New infrastructure projects for streets, schools, housing units and hospitals will be implemented as part of the Qataris' pledge of $1 billion during the donors' conference held in Egypt last October. Mofeed al-Hasayneh, Palestinian minister of public works and housing, told Al-Monitor that Qatar will also be working on the completion of projects already underway. A thousand housing units have been built, with a remaining 2,000 to go.

Meanwhile, after Amadi met with high-ranking Israeli officials on March 11, the Israeli media published leaked reports on Qatari mediation efforts for Gazan reconstruction and the signing of a long-term truce between Israel and Hamas. The leaks reinforced Fatah’s anxieties.

Amin Makboul, secretary-general of Fatah's Revolutionary Council, explained to Al-Monitor that Fatah is concerned about “any direct communication with Israel, including the Qatari-Israeli communication regarding the Gaza Strip, the reconstruction issue or any other issue, out of fear that Israel will exploit it to separate Gaza from the West Bank, thwart the Palestinian state project and consolidate the separation.” Makboul clarified, however, “We support Gaza’s reconstruction.” He said that the most important question is, “Why did Qatar go to Israel directly?”

In an interview with Al-Monitor, one leading Hamas member, Ahmed Yousef, said he believes the Qatari move had been “in response to the suffering of the Gazans.” As a result, according to him, “There is no need for being angry or fearful, and there is no justification for any party whatsoever to offend Qatar.”

Yousef said, “The Qatari action resulted from the absence of the government and PA in Gaza. Had the PA assumed its role toward the Gaza Strip and embraced the citizens’ concerns and problems, Qatar, or any other party, would not have filled the void by working on the reconstruction projects directly.”

A government delegation headed by Prime Minister Rami Hamdallah visited Gaza March 25 at the behest of Palestinian President Mahmoud Abbas. The purpose, according to Hamdallah, was “to firmly establish the reconciliation and resume an inclusive national dialogue.” The visit took place a few days after mutual recriminations erupted between Hamas and Fatah when the Interior Ministry in Gaza accused PA security forces in Ramallah of spying and fomenting riots, and Fatah responded by accusing Hamas of similar actions.

According to Yousef, “The Qatari move toward the Gaza Strip prompted the PA and the Hamdallah government to visit Gaza and promise to find solutions to Gaza's problems. It might have also embarrassed the government and the PA.”

He also stated, “The Qataris' actions were probably a strong message to the PA that there are those who will fill the void and will work in case it does not act. The PA got it and turned its attention to Gaza.”

Ismail Haniyeh, deputy head of Hamas’ political bureau, said in a March 22 statement, “Hamas is not slamming the door on a truce with Israel, as part of the Palestinian national project,” potentially assuaging PA fears. This suggests that the Qatari initiative aimed at calming the situation between Gaza and Israel might see the light of day. Hamas has nonetheless assured the PA that it will only enter into a truce after consultations with all the national parties so the decision will be a Palestinian undertaking.

Concerning Qatari reconstruction assistance, Hasayneh told Al-Monitor, “The Qataris were told [by the PA] that the government is in charge of the reconstruction issue and that the work should be conducted through the Ministry of Civil Affairs, which is in charge of facilitating the entry of construction materials into Gaza, in coordination with Israel, and that no party is allowed to do otherwise.”

He also reiterated, “The president is fearful of Gaza being separated from the West Bank, which would destroy the dream of establishing a Palestinian state, so we welcome all donations through the government. Regardless of the Qatari ambassador’s meeting with the Israelis, the work must be conducted within governmental mechanisms and frameworks. This has been agreed upon with Ambassador Amadi.”

On March 19, Hussein al-Sheikh, Palestinian Minister of Civil Affairs in the PA government, received the Qatari construction dossier from Amadi. Sheikh told Al-Monitor, “Full coordination had been established with the Qataris before they came to the Gaza Strip and Israel. Everything the Qatari government is doing has been run by the Palestinian government.” He also said, “We are making every effort to facilitate the Qatari mission of reconstructing Gaza, and we have provided everything necessary. The government took the decision of exempting the Qatari grant from taxation.”

Jihad Harb, a political analyst and author, told Al-Monitor that the PA fears “Gaza being considered a state capable of concluding agreements, such as the agreements on the provision of fuel or electricity from Israel, with Qatari support and sponsorship.” He said that amid the regional bickering between Qatar and the alliance consisting of Egypt, Saudi Arabia and the United Arab Emirates, there are concerns that Gaza's separation is part of Qatar's ambition to become an influential actor in the region. If some of Gaza’s needs — such as electricity and construction materials — are met by Qatar, it might assume the role of mediator between Gaza and Israel, thus usurping the roles of the PA and Egypt. This could lure Hamas into trying to maintain its control over Gaza.

The occupation, ongoing suffering and siege of Gaza, wobbly reconciliation between Fatah and Hamas and institutional division and lack of resolutions of Gaza’s problems by the Palestinian government guarantee continued anxieties over fears of political projects and plans that will thwart the effort to establish a Palestinian state along the 1967 borders as part of the two-state solution to which the Palestine Liberation Organization has committed itself.