Qatar boosts its influence in Gaza

As Qatar works to alleviate the living conditions plaguing Palestinians due to the blockade, it also seeks to achieve greater influence in the Palestinian territories. 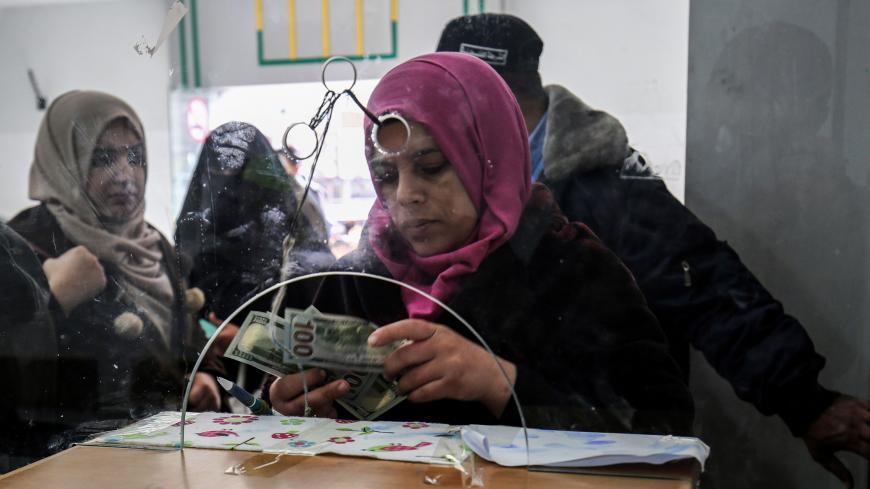 A Palestinian government employee receives a portion of her overdue salary, after Qatar pumped money into the territory, at a post office in Rafah, southern Gaza Strip, Dec. 8, 2018. - SAID KHATIB/AFP/Getty Images

Adnan Abu Hasna, a Gaza-based spokesman for the UN Relief and Works Agency for Palestine Refugees in the Gaza Strip (UNRWA), announced April 9 that a temporary employment process extending over three to nine months has kicked off. The process, he said, aims to fill 6,400 job vacancies with Qatari funding.

Abu Hasna noted that UNRWA and government institutions in Gaza, such as the Health and Education ministries, will benefit from having these jobs filled.

On March 31, Israel opened the Kerem Abu Salem and Beit Hanoun crossings in the framework of the Egyptian-brokered understanding with Hamas; the Rafah crossing on the Gaza-Egypt border is still operational. In addition, Israel expanded April 1 the allowed fishing zone off Gaza’s coast to 15 nautical miles in the south near Egypt.

“Qatar has agreed to finance the supply of gas to Gaza's power plant within six months as well as the establishment of solar tanks for the plant,” a Hamas official told Al-Monitor on condition of anonymity.

Since October 2018, Qatar has paid $150 million to the Gaza Strip to help poor families, cover salaries of Gaza public servants out of work and purchase fuel for the Gaza power plant for six months ending April.

Hamas leader in Gaza Yahya al-Sinwar said April 6 during a meeting with Palestinian factions and community figures in Gaza, “Qatar plays a key role in word and deed in the efforts to break the siege on the Gaza Strip and to alleviate the suffering of the Palestinian people. It pumps money into the economy and establishes humanitarian projects.”

Qassem said that Qatar has an important role when it comes to energy, relief, employment, security and employees’ salaries in the Gaza Strip. In addition, he noted, it plays a key role in lifting the siege on Gaza, which is something the Palestinian people greatly appreciate.

This, according to Qassem, shows how genuine Qatar’s government, people and leadership are. He pointed out that such efforts have been ongoing since Sheikh Hamad bin Khalifa Al Thani took office, as Qatar started building residential cities, paving roads and supporting the health and energy sectors.

Sheikh Hamad became emir in 1995 and relinquished power to his son Sheikh Tamim bin Hamad Al Thani in 2013. Through Qatar’s Gaza Reconstruction Committee, he implemented around 150 projects, most notably the rehabilitation of Salah al-Din Street in Gaza, the establishment of Sheikh Hamad residential city in Khan Yunis in the southern Gaza Strip and the establishment of a water network in the city of Beit Lahiya in the northern Gaza Strip. In addition, he offered a grant to Gaza worth $407 million in 2012 after the Israeli war in November 2012.

Qassem told Al-Monitor, “Although we, as a movement, do not get direct financial support from Qatar, which supports the Palestinian people, the ever-growing ties between Hamas and Doha are a natural evolution. Hamas is trying to keep a balance in its foreign relations, and it steers clear of siding with one party or axis against another. While the Palestinian Authority [PA] keeps trying to sabotage Hamas’ relations with other countries, all we care about is to have the Palestinian people benefit from the support we get.”

On April 3, Hamas political bureau head Ismail Haniyeh called the former emir and briefed him on the latest developments in the truce between the Palestinians and Israel. He praised Qatar's role in humanitarian projects in the Gaza Strip.

Meanwhile, Hamad bin Khalifa Al Thani stressed his support for the Palestinian people and stressed the need to implement the recent understandings reached between Hamas and Israel.

Al-Monitor attended a meeting April 2 in Gaza between Haniyeh and a number of political analysts, academics and authors. Haniyeh said that the understandings with Israel include humanitarian projects that Qatar agreed to fund.

On March 29, Haniyeh also discussed over the phone with Qatari Foreign Minister Mohammed bin Abdulrahman bin Jassim Al Thani the latest developments in the truce and stressed Qatar's role in tackling the humanitarian situation in Gaza and in supporting the projects it finances there.

Amin Makboul, a member of Fatah’s Central Committee, told Al-Monitor, “The PA is not completely absent from the Gaza Strip as it is keeping an eye on foreign interference there. But we do not want to have problems with any Arab country, and any Arab contacts with Gaza must be carried out through President Mahmoud Abbas, who represents both the Gaza Strip and the West Bank. There should not be any contact with each separately. Yet this is the case with Gaza and it is unacceptable.”

On Feb. 17, Abbas instructed Fatah leaders to stop attacking Qatar and its role in the Gaza Strip. On Feb. 12, Fatah Central Committee member Abbas Zaki had accused Qatar of helping the Israeli occupation and described its role as “disobedient.”

On Nov. 9, 2018, member of the PLO Executive Committee Ahmed Majdalani attacked the Qatari role in Gaza, saying it was overstepping the PA, entrenching division, sabotaging the reconciliation efforts and informally funding Hamas.

Khalil Shaheen, director of research at the Palestinian Center for Policy Research and Strategic Studies - Masarat, told Al-Monitor, “Qatar is seeking to keep Hamas away from armed action. Its support is focused on humanitarian work in a bid to spare Gaza an Israeli war, and this is different from Iran's weapon-limited support.”

He noted, “Egypt and Qatar are dividing their roles when it comes to their relations with Hamas. The first concludes a security truce between the movement and Israel while the second provides financial support. Hamas has established communication channels with the two parties.”

Shaheen added, “Abbas maintains a good relationship with Qatar because he does not want problems with Doha for supporting Gaza. However, should he feel that such support strengthens Hamas’ control there, he will not hesitate to react.”

Majid Abu Diak, a Qatar-based Palestinian author who writes for Al-Jazeera.net, told Al-Monitor, “The Qatari support for Gaza falls within Qatar’s desire to strengthen its political role in the region. Qatar is indeed achieving this thanks to its ties with Hamas. Meanwhile, both Israel and the United States are pleased with Qatar's ongoing relationship with Hamas and are turning a blind eye to the support it provides to Gaza.”

On Nov. 11, 2018, Israeli Prime Minister Benjamin Netanyahu announced that “the introduction of Qatari funds into the Gaza Strip prevents a humanitarian crisis, and this is a step in the right direction.”

Palestinians in Gaza, Hamas leaders included, believe Qatar is their lifeline to overcome the blockade. Yet they are well aware that Qatar is not a charity and that it pumps money into the Gaza Strip in order to achieve greater influence in the Palestinian territories. Hamas leaders are not ashamed to admit this so long as they do not have to make any political concessions in return — the PA’s constant attacks against both Hamas and Qatar not being a problem for them.